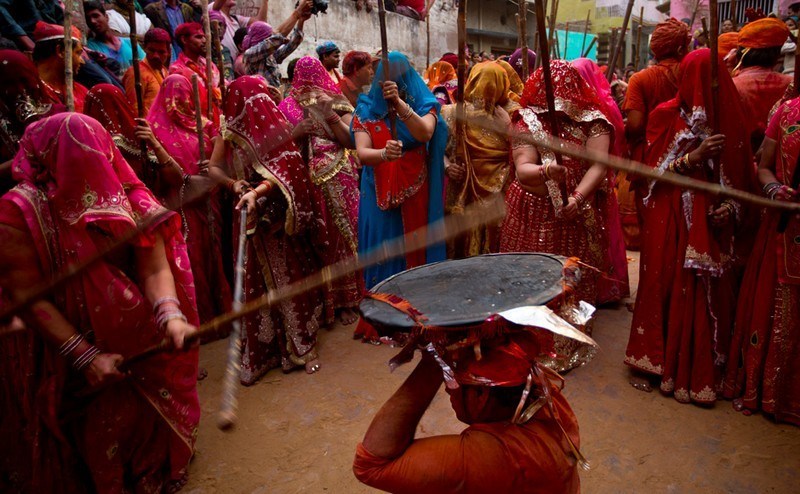 #7 of 8 Places to Visit in Mathura

At a distance of 48 km from Vrindavan and 45 km from Mathura, Barsana is a town in the Mathura district of Uttar Pradesh. Barsana was the birthplace of Radha, the consort of Krishna. Barsana is among well known tourist places near Delhi, best visited during Holi festival.

Barsana is surrounded by hills from four sides and this place was earlier named Brahmsarin. The myth goes that Krishna asked Brahma to take the form of hill. The four hills are said to represent the four heads of Brahma. Hence Brahma and Sarin (head) form this name. All the four hills have temples dedicated to Lord Krishna and Radha. The most famous among these is the Radharani Mandir, more fondly referred to as the Ladli ji Temple. It was built by Raja Bir Singh Ju Deo of Orchha in 1675. The new marble temple adjoining it is a later addition. The village also boasts of a tank named Prem Sarovar that is believed to be the first meeting place of Lord Krishna and Radha.

Barsana is famous for Lath Mar Holi. It was the home of Radha where Krishna went to tease her and her friends. Taking offence at this, the women of Barsana chased Krishna and his friends away. The main celebrations at Barsana, take place at the Ladli ji temple, dedicated to Sri Radha Rani.

The two day celebrations of Lath Mar Holi are a unique experience. In the first day men from Krishna's village, Nandgaon travel to Barsana to tease the women there. The women chase men and hitting them with sticks, hence the name Lath Mar Holi. Men are allowed to protect themselves with shields but cannot hit back. The second day women from Barsana go to Nandgaon to play Holi with men at Nandgaon.

Radha Ashtami is also celebrated with full reverence and devotion. This is celebrated on the ninth day of Hindu month Bhadrapad (August / September).