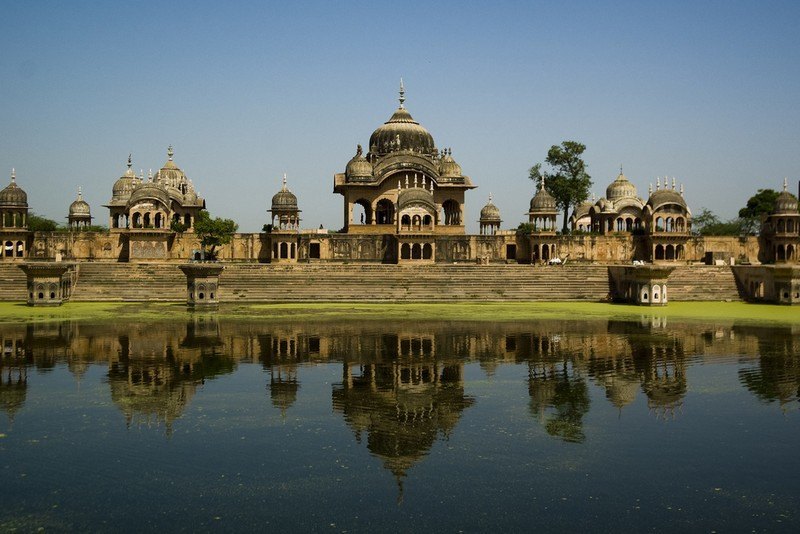 #5 of 8 Places to Visit in Mathura

At a distance of 26 km from Mathura, 148 km from New Delhi, and 25 km from Vrindavan, Kusum Sarovar is a huge tank, which belonged to the period of Lord Krishna, located between Govardhan and Radha Kund. Kusum Sarovar lies towards the right side of sacred parikrama path. It is among the ideal tourist places near Delhi & Noida for one day trip.

Kusum Sarovar is 450 feet long and 60 feet deep tank and features a flight of stairs on all sides. The Sarovar is believed to be the place where Radha along with gopikas used to collect flowers and meet Lord Krishna. Kadamba trees are found all over the place and it is said that Kadamba tree was the favorite tree of Lord Krishna. During the time of Lord Chaitanya (a great devotee of Lord Krishna), this place was known as Sumanah Sarovar. It is stated in the Chaitanya Charitamrita that Lord Chaitanya took bath here.

The Sarovar is surrounded by magnificent structures which were constructed by Jawahar Singh, the king of Bharatpur in the middle of 18th century, in honor of his father Raja Suraj Mal. A simple earthen pond till 1675, it was properly built by ruler of Orchha, Veer Singh, after which Suraj Mal constructed a garden for his queen, converting it into a beautiful place. Afterwards, Jawahar Singh built astonishing structures in the memory of his parents.

There are three tombs in the upper level. The main tomb of Raja Suraj Mal has beautiful paintings on its ceiling depicting the pastimes of Krishna and the lotus feet of Krishna engraved on the floor. There are also some paintings of Raja Suraj Mal in his court. The other tombs are those of his two queens, Kishori and Hansiya. The interior of these buildings is also breathtaking. Walls are decorated with paintings and ceilings are highly decorated. These include paintings on the lives of Jat kings and on the Lilaas of Lord Krishna. There is also a temple dedicated to Giriraja here.

The water of the Sarovar is ideal for swimming so the travelers can spend some quality time here. Kusum Sarovar has a number of ashrams and temples nearby and the travelers can attend the evening aarti. Radha Kund is also an important tourist attraction situated nearby.