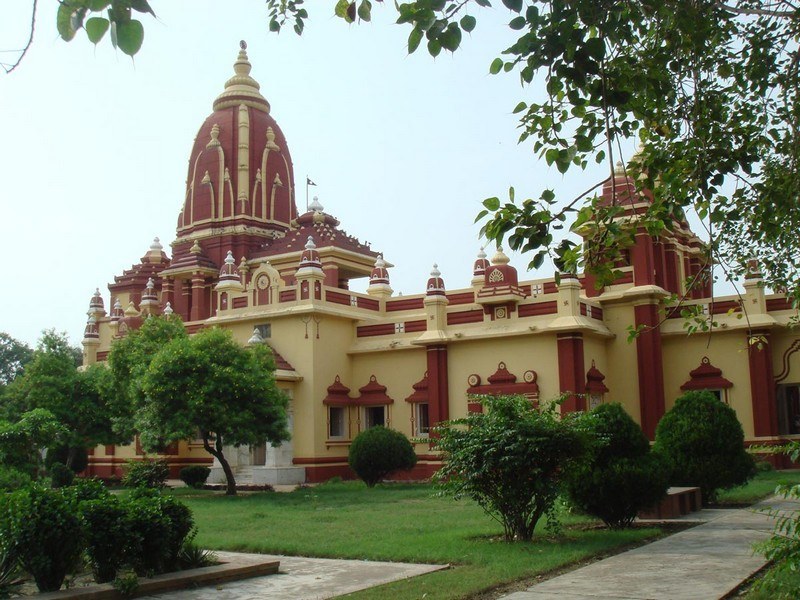 #4 of 8 Places to Visit in Mathura

At a distance of 6.5 km from Mathura Junction Railway Station, Gita Mandir, also known as Birla Mandir is located on the outskirts of Mathura, on the Vrindavan - Mathura road. It is one of the most popular destinations of Mathura frequented by pilgrims and leisure tourists alike.

The presiding deity of the shrine is Lord Lakshmi Narayan. Gita Mandir was built by Jugal Kishore Birla, the famous Birla group in memory of his parents and all the 18 chapters of Bhagavad Gita are written on the pillars of this temple.

This temple has breathtaking architecture accompanied with beautiful carvings and paintings that add to the beauty of this temple. The temple is large and looks magnificent in red sandstone and it also stands as a proof of excellent craftsmanship. A magnificent idol of Lord Krishna is housed in this temple along with Lakshmi Narayan, Ram and Sita. The temple also houses Lord Krishna's Chariot and Gita Stambh which has the entire carvings of Bhagavad Gita.

The temple also boasts of several exquisite paintings of gods and goddesses on marble walls. The temple is well maintained and presents a peaceful and serene ambience to the pilgrims. There is also a small temple dedicated to Lord Hanuman within the premises.

During the festivals like Janmashtami and Holi, the temple is beautifully decorated and illuminated. Special poojas are offered during these festivals and thousands of devotees visit the shrines on these festival days.