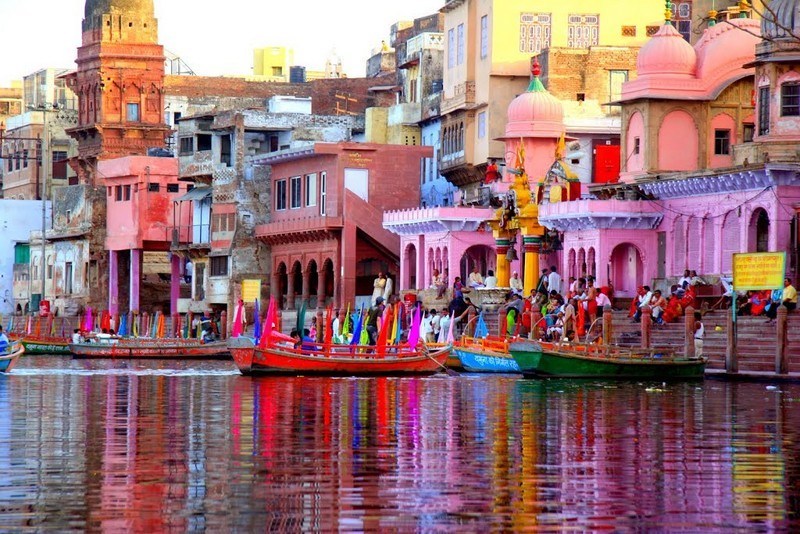 At a distance of 56 km from Agra, 159 km from Delhi, 419 km from Lucknow and 224 km from Jaipur, Mathura is an ancient city and also the district headquarters of Mathura in the state of Uttar Pradesh. Mathura is one of the popular tourist places near Agra and also one of the best places to visit near Delhi.

Mathura is one of the seven cities (Sapta Puri) considered holy by Hindus, the other six are Ayodhya, Haridwar, Varanasi, Kanchipuram, Ujjain and Dwarka. Mathura has been chosen as one of the heritage cities for HRIDAY - Heritage City Development and Augmentation Yojana scheme of Government of India. Mathura is also one of the popular Delhi weekend getaways for 2 day trip. Mathura is located at the banks of river Yamuna and is popularly known as the Brajbhoomi, the sacred land of Lord Krishna. The Sri Krishna Janmabhoomi temple is home to a prison cell called Garbha Griha that is believed to be the exact birthplace of Krishna. Large number of devotees visit this temple every year on Janmashtami.

The city of Mathura has a rich history. In the traditional times, Mathura was an important point of culture and civilization. According to the Archaeological Survey of India, the city is mentioned in the epic, Ramayana. In the epic, the Ikshwaku prince Shatrughna slays a demon called Lavanasura and claims the land. Afterwards, the place came to be known as Madhuvan as it was thickly wooded, then Madhupura and later Mathura.

In the 6th century BC Mathura became the capital of the Surasena Mahajanapada. The city was later ruled by the Maurya Empire and the Shunga dynasty. Mathura saw its golden age during the rule of the Kushanas and the able governance of rulers like Kanishka, Huvishka, and Vasishka, when the arts flourished and economic wealth grew. The city was sacked and many of its temples destroyed by Mahmud of Ghazni in 1018 and again by Sikandar Lodi, who ruled the Sultanate of Delhi from 1489 to 1517.

Apart from Sri Krishna Janma Bhumi, Dwarkadheesh Temple, Gita mandir, Kusum Sarovar, Vishram Ghat and Jama Masjid are the top places to visit in Mathura. The Government Museum in Mathura is one of the best museums and attracts people with archaeological interest. The museum has some of the best collections of artifacts from the Gupta and Kushan period (400 BC-1200AD).

Holi and Janmastami are the major festivals celebrated in Mathura. The Holi festival attracts national and international tourists to this town. Tourists can also visit nearby Barsana where the interesting tradition of Lath Mar Holi is observed. Mathura is also known for its milk and is famous for ghee (clarified butter) that is considered one of the best in the country.

The best time to visit Mathura is from October to March.

How to Reach Mathura - Full Details

Top 10 Places to Visit in Mathura

#1 of 8 Places to Visit in Mathura

At a distance of 4 km from Mathura Junction Railway Station, Sri Krishna Janmabhoomi is the most famous temple located in the crowded city of Mathura. The temple is the most important site for the followers of Lord Krishna and Hindus as a whole.

Sri Krishna Janma Bhoomi also known as Katra Keshav Dev temple, is the actual birthplace of Lord Krishna. A bigger temple was constructed to replace the old temple during the reign of Emperor Chandragupta Vikramaditya (4th century CE). This temple used to one of the grandest temples in India until it was destroyed by Ghazni Mahmud in 11th century. In 1150 AD, Jajja during the rule of Vijay Pal Deva rebuilt the temple but the temple was destructed by other Muslim ruler Sikandar Lodi in 16th century. The fourth temple was built during the rule of Mughal emperor Jahangir by Veer Singh Bundela of Orchaa. But it was again destroyed by Aurangzeb in 1669 AD and a mosque named Jami Masjid was built .....

#2 of 8 Places to Visit in Mathura

At a distance of 4 km from Mathura Junction Railway Station, Dwarkadheesh Temple is one of the oldest and largest temples in Mathura. It is located near the banks of river Yamuna, close to Vishram Ghat and Gatashram Tila. It is one of the top places to visit in Mathura and also one of the most visited Mathura temples.

The temple is known for its beautiful architecture, carvings, and paintings. This five storied building is supported by seventy two pillars. The main shrine has the images of Lord Krishna and his beloved .....

#3 of 8 Places to Visit in Mathura

At a distance of 4.5 km from Mathura Junction Railway Station, Vishram Ghat is a sacred bathing ghat situated on the banks of river Yamuna in Mathura.

Vishram Ghat is the main ghat of Mathura and is central to 25 other ghats. The ghat is made up of marble stone and has a large stone arch. According to the legend, Lord Krishna is said to have rested at this place after killing Kansa. The name of the ghat is derived from this particular incidence (Vishram means Rest). The Vishram Ghat is one of the most important ghats as the traditional parikrama starts and ends at this place. The parikrama is the circumambulation of all the major religious and cultural places of Mathura.

The Vishram ghat is lined with elegant temples and some of Mathura's most important shrines that include Mukut Temple, Radha-Damodar, Murali Manohar, Neelkantheshwar, Yamuna-Krishna, Langali Hanuman and Narasimha temples.

#4 of 8 Places to Visit in Mathura

At a distance of 6.5 km from Mathura Junction Railway Station, Gita Mandir, also known as Birla Mandir is located on the outskirts of Mathura, on the Vrindavan - Mathura road. It is one of the most popular destinations of Mathura frequented by pilgrims and leisure tourists alike.

The presiding deity of the shrine is Lord Lakshmi Narayan. Gita Mandir was built by Jugal Kishore Birla, the famous Birla group in memory of his parents and all the 18 chapters of Bhagavad Gita are written on the pillars of this temple.

This temple has breathtaking architecture accompanied with beautiful carvings and paintings that add to the beauty of this temple. The temple is large and looks magnificent in red sandstone and it also stands as a proof of excellent craftsmanship. A magnificent idol of Lord Krishna is housed in this temple along with Lakshmi Narayan, Ram and Sita. The temple also houses Lord Krishna's Chariot and Gita Stambh which .....

#5 of 8 Places to Visit in Mathura

At a distance of 26 km from Mathura, 148 km from New Delhi, and 25 km from Vrindavan, Kusum Sarovar is a huge tank, which belonged to the period of Lord Krishna, located between Govardhan and Radha Kund. Kusum Sarovar lies towards the right side of sacred parikrama path. It is among the ideal tourist places near Delhi & Noida for one day trip.

Kusum Sarovar is 450 feet long and 60 feet deep tank and features a flight of stairs on all sides. The Sarovar is believed to be the place where Radha along with gopikas used to collect flowers and meet Lord Krishna. Kadamba trees are found all over the place and it is said that Kadamba tree was the favorite tree of Lord Krishna. During the time of Lord Chaitanya (a great devotee of Lord Krishna), this place was known as Sumanah Sarovar. It is stated in the Chaitanya Charitamrita that Lord Chaitanya took bath here.

The Sarovar is surrounded by magnificent structures which were constructed by Jawahar Singh, the king of Bharatpur in the .....

#6 of 8 Places to Visit in Mathura

At a distance of 13 km from Mathura, 70 km from Agra, 155 km from Delhi, 400 km from Lucknow and 235 km from Jaipur, Vrindavan is a holy town situated on the banks of Yamuna River in Mathura district of Uttar Pradesh. It is also among the sacred places to visit near Delhi for a 2 day weekend trip and also one of the popular places to visit near Agra.

Vrindavan is a major pilgrimage center for the Hindus and one of the oldest cities in the country. The holy town of Vrindavan has a very rich history associated with the Hindu god Lord Krishna. It is said to be the place where Lord Krishna spent his childhood. Chaitanya Mahaprabhu, a great devotee of Lord Krishna is credited with rediscovering of Vrindavan. The place was later developed by various kings of the region.

The name Vrindavan is derived from the words vrinda meaning tulsi (or basil) .....

#7 of 8 Places to Visit in Mathura

At a distance of 2.5 km from Mathura Junction Railway Station, Government Museum, popularly known as Mathura Museum, is an archeological museum located near the Dampier Park in Mathura city. It is one of the best museums in India and also one of the popular Mathura tourist places.

The museum was founded by then collector of the Mathura district, Sir F. S. Growse in 1874. Initially it was known as Curzon Museum of Archaeology, then Archaeology Museum, and finally changed to the Government Museum, Mathura. Mathura Museum is considered one of the leading centers for research, study and the preservation of the heritage left by the Mathura School of Sculpture.

The building of the museum itself is worth visiting. This beautiful building is octagonal in shape and is made out of the red-sandstone. The museum is famous for ancient sculptures of the Mathura school dating from 3rd century BC to 12th century AD, all found from archaeological .....

#8 of 8 Places to Visit in Mathura

At a distance of 48 km from Vrindavan and 45 km from Mathura, Barsana is a town in the Mathura district of Uttar Pradesh. Barsana was the birthplace of Radha, the consort of Krishna. Barsana is among well known tourist places near Delhi, best visited during Holi festival.

Barsana is surrounded by hills from four sides and this place was earlier named Brahmsarin. The myth goes that Krishna asked Brahma to take the form of hill. The four hills are said to represent the four heads of Brahma. Hence Brahma and Sarin (head) form this name. All the four hills have temples dedicated to Lord Krishna and Radha. The most famous among these is the Radharani Mandir, more fondly referred to as the Ladli ji Temple. It was built by Raja Bir Singh Ju Deo of Orchha in 1675. The new marble temple adjoining it is a later addition. The village also boasts of a tank named Prem Sarovar that is believed to be the first meeting place of Lord Krishna and .....