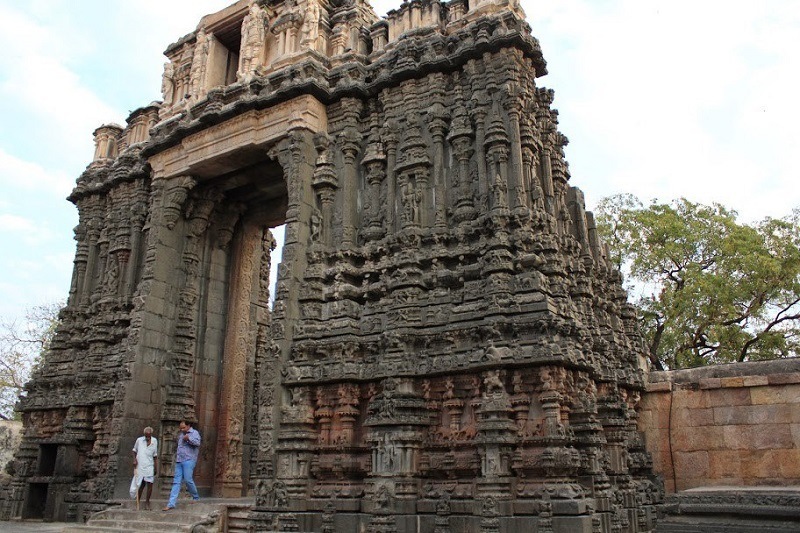 #3 of 8 Places to Visit in Anantapur

Travel Tips: Chintala Venkataramana Swamy Temple is 1 km from here and both places can be visited together

At a distance of 4 km from Tadipatri Railway Station, 58 km from Anantapur, 107 km from Kadapa, 357 km from Hyderabad, 413 km from Vijayawada and 269 km Bangalore, Bugga Ramalingeswara Swamy Temple is located on the banks of Penna River at Tadipatri in Anantapur district of Andhra Pradesh. The presiding deity of the temple is Lord Shiva in the form of Ramalingeswara Swamy.

The temple got this name by a perennial underground stream from which water always keeps flowing (Bugga in Telugu) into the sanctum sanctorum at the spot where the Lingam is consecrated. Sri Bugga Ramalingeswara Swamy Temple was built by Ramalinga Nayudu, a chieftain of the Vijayanagara Kings, in 16th century. The records indicate that a sculptor Yellanchari was brought from Benaras to construct the temple. According to legend, the temple has been established at the site, where sage Parasurama lived and performed meditation.

The architecture of the temple shows a mixture of Chalukyan, Chola and Vijayanagar art. The temple has main entrances on South and West. The Vijayanagar kings have built the western, northern and southern gopurams of the temple. The north gopuram although unfinished has the most elaborate sculpture, with intricate carvings. The entire Shiva Purana is carved on the walls of the temple in miniature carvings with elaborate details. Episodes from Hindu epics Ramayana and Mahabharata are also carved on the walls. This temple has a mini stone chariot similar to the famous chariot of Vittala Temple in Hampi.

The Swayambhu Linga is placed on a pedestal in sanctum; water is seen flowing out of the pedestal all the time. This water is treated as holy water by the devotees. At the river side of the temple there is a statue of goddess standing by steps. It is believed that when the water level of the river Penna reaches the navel point of that statue, the entire town Tadipatri will be sinking in the water and that leads to the end of the town.

The car festival is celebrated annually on Shivaratri day during February / March. Sri Ramanavami is also another major festival here.