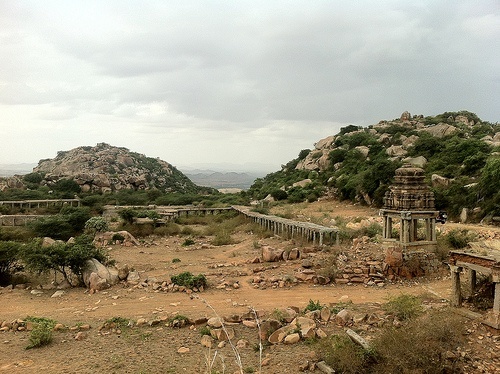 #4 of 8 Places to Visit in Anantapur

Travel Tips: This fort demands good amount of trekking across the hill and rocky terrain

At a distance of 3 km from Penukonda Railway Station, 79 km from Anantapur, 436 km from Hyderabad, 550 km from Vijayawada and 142 km Bangalore, Penukonda Fort is a medieval fort situated at Penukonda in Anantapur district of Andhra Pradesh.

Penukonda was once served as the 2nd capital of Vijayanagar Kingdom after the fall of Hampi and was earlier called as Ghanagiri or Ghanadri. According to the inscriptions, the Penukonda state was gifted by the King Bukka-I to his son Virupanna. This fort was built at the time of Virupanna. This fort was one of the best defenses of the Vijayanagara kingdom. With the decline of Vijayanagara kingdom, the Sultan of Golconda captured this fort. Later Mysore Kingdom captured this fort briefly until British overtook after the fall of Tipu Sultan.

Built on a gigantic hill, the huge and imposing fort offers a spectacular view of the town below. The basement of the walls, bastions and gateways in the fort was made of stone, mortar and lime. The first inner section of the fort residential building designed amenities for royal family members. The central hall of the fort follows Hindu and Muslim architecture. Dome of this hall has been designed in Hindu style of construction, whereas the floor has the signature style construction of Islamic architecture.

The fort bounds with natural fortification of surround hills and moats dug up around the outer wall. There are seven citadels within the fortification. The entrance of the fort is marked by a huge gate called Yerramanchi Gate. Here one can see a tall idol of Lord Hanuman which is about 11 feet high. The two famous attractions here are Gagan Mahal Palace and Babayya Darga. Gagan Mahal was constructed in 1575 AD and it throws light on the life style Vijayanagara Dynasty. Gagan Mahal got few additions during the Muslim rule of the region.

Another important place is Babayya Darga within the fort. Penukonda has several temples, famous ones being the temples of Lord Hanuman, Yoga Narasimhaswamy, Kashi Vishwanatha and Lord Yogarama. Most of the temples are currently in ruined state. The most important mosque is the Sher Khan Mosque, which has on the pavement of its courtyard a Telugu inscription of Sadashiva, dated 1564.

An armory is also located at this fort where all the fire arms and ammunitions were kept. Presently Archeological Survey of India is managing this fort. The fort is not in the best of state but gives its visitors a glimpse of the glorious past of the region. The fort demands a trek for about 20 minutes one way from the bottom and it usually takes about 2 hours to explore the fort.