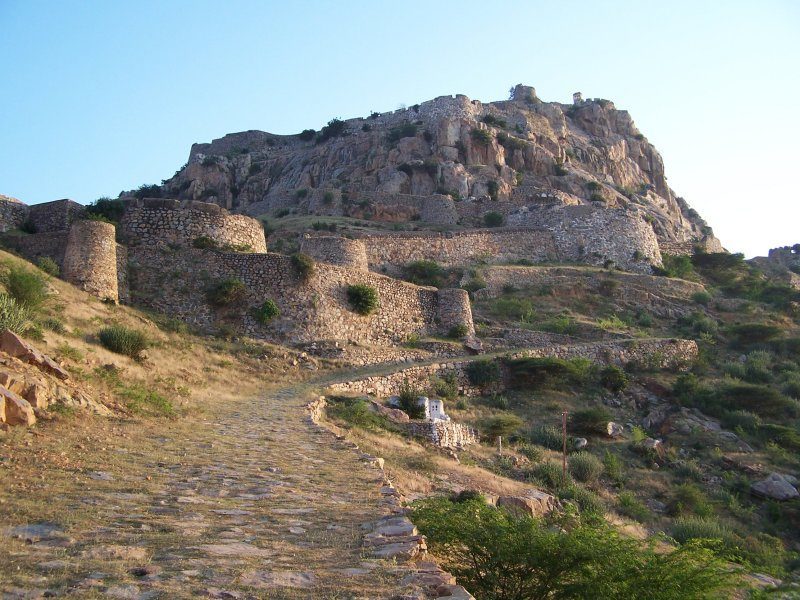 #1 of 8 Places to Visit in Anantapur

Travel Tips: This fort demands good amount of trekking across the hill and rocky terrain

At a distance of 5 km from Gooty Railway Station, 52 km from Anantapur, 97 km from Kurnool, 311 km from Hyderabad, 425 km from Vijayawada and 265 km from Bangalore, Gooty Fort or Gutti Fort is a hill fort located at Gooty in Anantapur district of Andhra Pradesh.

Gooty was center of power struggle and witnessed several wars in the medieval period. Sri Krishnadevaraya of Vijayanagara Empire has enhanced the fortifications and added several sections in the fort. Bahmani Sultans have also occupied the fort for some time. After the fall of Vijayanagara Empire, this place came under the rule of Qutb Shahis of Golconda and Hyderabad Nizams. Later, it came under the rule of Hyder Ali in 1773, then Tipu Sultan and over a period of time it fell into the hands of Hyderabad Nizams. The fort was briefly occupied by Maratha forced under the command of Morari Rao. This place was gifted to British by Nizam for the maintenance and became part of Ceded region under Madras Presidency.

Previously this place was known as Gowthampuri and later renamed as Gooty. The earliest inscriptions on the walls of this fort date back to the 7th century. As per the inscriptions, the place was called as Gadha meaning Fort while an inscription of Bukkaraya mentions this place as King of Forts.

Gooty Fort is one of the oldest hill forts of Andhra Pradesh. It fort was made of granite rocks and the domes were constructed with fine stone, mortar and Lime ensuring the sustainability. Built in the shape of a shell, this fort actually comprises of 15 small forts with different gateways. The out wall with bastions connects all the gateways of smaller forts. The fort also features two imposing buildings, one of which is a gymnasium, while other is a barrack. On the edge of the cliff, there is a pavilion of polished limestone called Morari Rao's seat.

The fort of Gooty is an amalgamation of Hindu-Islamic architecture. Various wells were created at the top of the hill. There are several temples within the fort like the Lakshmi Narasimha Temple, Nageswara Swami Temple, Hanuman Temple, Jyothimma Temple and the Ramaswamy temple. There is also a Dargah inside the fortification. There are several ruined structures on the upper level of the fort.

The citadel of the fort is constructed on the westernmost circle of hillocks. It offers a panoramic view of the town below and the sunset here is amazing. The fort is approached by a well laid paved path from the bottom of the hillock. It takes approximately two hours to explore the fort.