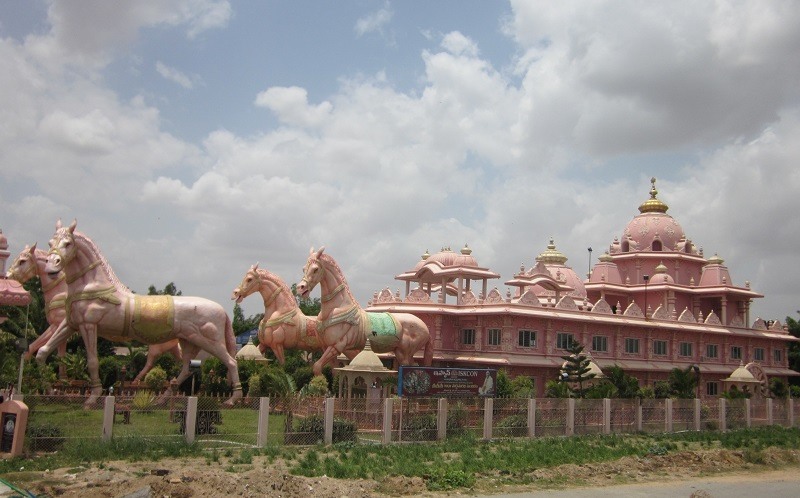 At a distance of 149 km from Kurnool, 168 km from Kadapa, 361 km from Hyderabad, 475 km from Vijayawada and 215 km Bangalore, Anantapur is a city and the headquarters of the Anantapur district in Andhra Pradesh. This is the largest district in the state bounded on north by Kurnool, on the east by Kadapa and Chittoor and on the south and west by the Karnataka State. This is also one of the famous Andhra Pradesh tourist places.

This region is also known by the name of Anantapuram and was earlier known as Anantasagaram, which means an endless ocean. The villages of Anantasagaram and Bukkarayasamudram were constructed by Chilkkavodeya, the minister of Bukka-I, a Vijayanagar ruler. During the Vijaynagar period, Anantapur was an important center and popularly known as Hande Anantapuram. Anantapur and a couple of other places were gifted by the Vijaynagar rulers to Hanumappa Naidu of the Hande family. Penukonda in Ananthapur district was the capital was Vijayanagaras after the fall of Hampi.

The place subsequently came under Qutub Shahis, Mughals, and the Nawabs of Kadapa, although the Hande chiefs continued to rule as their subordinates. Later it came into the possession of Hyder Ali and Tipu Sultan. Tipu hanged all the male members of Hande rulers except Siddappa who escaped from his confinement at Srirangapatnam. After Tipu's death, it was once again taken back by Siddappa. The British took control of Anantapur as part of their treaty with the Nizams. Anantapur district was formed in 1882 when it was separated from Bellary district. Sir Thomas Munro was the first Collector.

Anantapur is home to many ancient temples, monuments and forts that give a glimpse into the rich history of the region. Lepakshi is renowned for grand architecture and repository of mural paintings of the Vijayanagar Kings. Puttaparthi, Kadiri Lakshmi Narasimha Swamy Temple famous for the idol sweating, Chintala Venkataramana Swamy Temple and Bugga Ramalingheswara Swamy Temple in Tadipatri some of the well known tourist spots in the district. The region is also well-known for its booming silk and cotton weaving industry in Dharmavaram. Penukonda Fort, Hemavathi, Rayadurgam fort and Gooty fort are the other attractions here.

The best time to visit Anantapur is from November to February.

How to Reach Anantapur - Full Details

Top 10 Places to Visit in Anantapur

#1 of 8 Places to Visit in Anantapur

At a distance of 5 km from Gooty Railway Station, 52 km from Anantapur, 97 km from Kurnool, 311 km from Hyderabad, 425 km from Vijayawada and 265 km from Bangalore, Gooty Fort or Gutti Fort is a hill fort located at Gooty in Anantapur district of Andhra Pradesh.

Gooty was center of power struggle and witnessed several wars in the medieval period. Sri Krishnadevaraya of Vijayanagara Empire has enhanced the fortifications and added several sections in the fort. Bahmani Sultans have also occupied the fort for some time. After the fall of Vijayanagara Empire, this place came under the rule of Qutb Shahis of Golconda and Hyderabad Nizams. Later, it came under the rule of Hyder Ali in 1773, then Tipu Sultan and over a period of time it fell into the hands of Hyderabad Nizams. The fort was briefly occupied by Maratha forced under the command of Morari Rao. This place was gifted to British by Nizam for the maintenance and became part of .....

#2 of 8 Places to Visit in Anantapur

At a distance of 1 km from Bugga Ramalingeswara Swamy Temple, 3 km from Tadipatri Railway Station, 57 km from Anantapur, 106 km from Kadapa, 356 km from Hyderabad, 413 km from Vijayawada and 268 km Bangalore, Sri Chintala Venkataramana Swamy Temple is a famous temple located in Tadipatri town of Anantapur district in Andhra Pradesh. This temple is dedicated to Lord Vishnu, who is in the divine form of Venkataramana Swamy.

This temple is believed to have been built in 16th century by Timma Naidu, son of Ramalinga Naidu, a chieftain of Vijayanagar Kingdom. It was built during the same time as the Vittala Temple of Hampi in a similar manner. Most of the features of these two temples bear close resemblance to each other, being built on a similar ground plan. While the stone chariot here is compact and small in size when compared to the famous stone chariot at Hampi.

#3 of 8 Places to Visit in Anantapur

At a distance of 4 km from Tadipatri Railway Station, 58 km from Anantapur, 107 km from Kadapa, 357 km from Hyderabad, 413 km from Vijayawada and 269 km Bangalore, Bugga Ramalingeswara Swamy Temple is located on the banks of Penna River at Tadipatri in Anantapur district of Andhra Pradesh. The presiding deity of the temple is Lord Shiva in the form of Ramalingeswara Swamy.

The temple got this name by a perennial underground stream from which water always keeps flowing (Bugga in Telugu) into the sanctum sanctorum at the spot where the Lingam is consecrated. Sri Bugga Ramalingeswara Swamy Temple was built by Ramalinga Nayudu, a chieftain of the Vijayanagara Kings, in 16th century. The records indicate that a sculptor Yellanchari was brought from Benaras to construct the temple. According to legend, the temple has been established at the site, where sage Parasurama lived and performed meditation.

The architecture of the temple shows a mixture of Chalukyan, Chola and Vijayanagar .....

#4 of 8 Places to Visit in Anantapur

At a distance of 3 km from Penukonda Railway Station, 79 km from Anantapur, 436 km from Hyderabad, 550 km from Vijayawada and 142 km Bangalore, Penukonda Fort is a medieval fort situated at Penukonda in Anantapur district of Andhra Pradesh.

Penukonda was once served as the 2nd capital of Vijayanagar Kingdom after the fall of Hampi and was earlier called as Ghanagiri or Ghanadri. According to the inscriptions, the Penukonda state was gifted by the King Bukka-I to his son Virupanna. This fort was built at the time of Virupanna. This fort was one of the best defenses of the Vijayanagara kingdom. With the decline of Vijayanagara kingdom, the Sultan of Golconda captured this fort. Later Mysore Kingdom captured this fort briefly until British overtook after the fall of Tipu Sultan.

Built on a gigantic hill, the huge and imposing fort offers a spectacular view of the town below. The basement of the walls, bastions and gateways in the .....

#5 of 8 Places to Visit in Anantapur

According to the history, Rayadurgam Fort was built by Junga Nayaka, a chieftain of Vijayanagar Kings. The Battle of Talikota was a bitter battle fought between Rama Rayalu the son in law of King Sri Krishna Deva Raya and Deccan Sultanates. Later the Muslim force was driven out by Koneti Nayaka. The fort was strengthened to a greater extent by his son Venkatapathi Nayaka. Later Tipu Sultan captured the fort and it was annexed to the province of Gooty.

The Rayadurgam Fort comprises of several layers of inner forts that made the access difficult. The .....

#6 of 8 Places to Visit in Anantapur

At a distance of 1.5 km Kadiri Railway Station, 100 km from Anantapur, 113 km from Kadapa, 458 km from Hyderabad, 476 km from Vijayawada, and 174 km from Bangalore, Sri Kadiri Lakshmi Narasimha Swamy Temple is located in Kadiri town in Anantapur District of Andhra Pradesh. The temple is dedicated to Lord Narasimha, a Man-lion form and is one of the 10 avatars of Lord Vishnu.

Lord Narasimha in this temple is swayambhu emerging from the roots of Khadri tree (Indian mulberry). The specialty of this temple is that after the daily Abhishekam is performed, the idol of Lord Lakshmi Narasimha oozes sweat continuously even after repeatedly wiping off sweat by the temple priests.

The construction of this temple is said to have been commenced during the Western Chalukya rule but it was completed during the time of Vijayanagara rulers. The inscriptions in the temple relate mostly to the Vijayanagar period. One of them states that the temple was built by a Nayaka during the reign of Bukka .....

#7 of 8 Places to Visit in Anantapur

At a distance of 26 km Kadiri Railway Station, 120 km from Anantapur, 113 km from Kadapa, 484 km from Hyderabad, 486 km from Vijayawada and 186 km from Bangalore, Thimmamma Marrimanu is a huge banyan tree located in the village of Gutibayalu in Anantapur district of Andhra Pradesh.

The tree is more than 550 years old covers over 5 acres and has about 1100 roots. It was recorded as the biggest banyan tree in the Guinness Book of World Records in 1989. The tree was first noticed by Sathyanarayana Iyer, a freelance journalist who resides in Bengaluru, Karnataka who spread the word about this tree and tried for entry.

There is a temple dedicated to Thimmamma under the tree. This lady was born to the Setti Balija couple Mangamma and Sennakka Venkatappa in the year 1394 AD. She was married to Bala Veerayya. When the husband died of illness, Thimmamma sacrificed herself on the funeral pyre.

There is a belief that the childless couples who come to pray at this temple are gifted .....

#8 of 8 Places to Visit in Anantapur

At a distance of 36 km from Madakasira, 70 km from Hindupur, 156 km from Anantapur, 513 km from Hyderabad, 627 km from Vijayawada and 158 km Bangalore, Hemavathi is a small town located in Anantapur district of Andhra Pradesh. Hemavathi was the capital of Pallavas between 8th and 10th century AD. The town was known as Henjeri during the Pallava reign.

Pallavas built few fascinating temples at Hemavathi. Ruins of a large fort were excavated near Hemavathi town. There are many temples around this fort which possess wonderful architecture. Some of the famous temples are Siddeswara Temple, Doddeshwara Temple, Virupaksheswara Temple and Malleswara Temple. The temple complex is spread over an area of around 15 acres.

Among these temples, Doddeswara Swamy temple is most striking and a well built structure. The stone used in making the idols are polished like metal and also make a sound of metal when struck. There is a 6 feet tall Shivalinga installed inside the sanctum sanctorum. .....