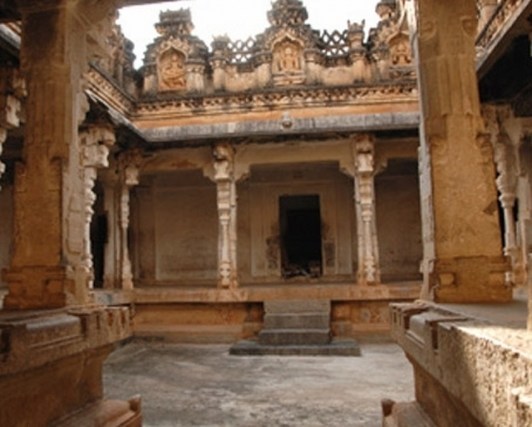 #8 of 8 Places to Visit in Anantapur

At a distance of 36 km from Madakasira, 70 km from Hindupur, 156 km from Anantapur, 513 km from Hyderabad, 627 km from Vijayawada and 158 km Bangalore, Hemavathi is a small town located in Anantapur district of Andhra Pradesh. Hemavathi was the capital of Pallavas between 8th and 10th century AD. The town was known as Henjeri during the Pallava reign.

Pallavas built few fascinating temples at Hemavathi. Ruins of a large fort were excavated near Hemavathi town. There are many temples around this fort which possess wonderful architecture. Some of the famous temples are Siddeswara Temple, Doddeshwara Temple, Virupaksheswara Temple and Malleswara Temple. The temple complex is spread over an area of around 15 acres.

Among these temples, Doddeswara Swamy temple is most striking and a well built structure. The stone used in making the idols are polished like metal and also make a sound of metal when struck. There is a 6 feet tall Shivalinga installed inside the sanctum sanctorum. A huge 8x4 feet idol of Nandi made of black granite sits at the entrance. The temple boasts some wonderful artwork. The walls of the temple are adorned with several artistic sculptures and images. The pillars have scenes from the epics Ramayana and Mahabharata. Rajendra Chola was very much attracted by the massive pillars in this temple. The temple adorns the place as a witness of a striking collection of Pallava and Chola architecture.

The other two temples in this complex are dedicated to Lord Shiva, called the Siddeshwara Swamy Temple and Mallikarjuna Swamy Temple. In Siddeswara temple, Lord Shiva Lord Shiva as Siddeswara, a physical form of Lord Shiva in meditation posture. This idol is a 5 feet tall imposing figure. The temple is built in such way that the Sun rays at the time of sun set touches the face of the Lord in all seasons.

The Archeological Department has set up a museum within the temple premises where the sculptures, idols and ancient carvings are preserved.