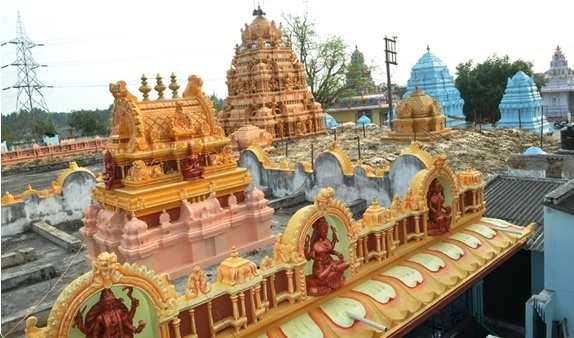 #4 of 8 Places to Visit in Kakinada

Kukkuteswara Swamy temple is the most famous temple of Lord Shiva at Pithapuram. The presiding Deity is Lord Shiva, who reveals himself in the form of a Spatika Linga. This is a Swayambhu Linga of white marble and is about two feet in height. The Linga resembles that of a cock; hence Lord Shiva is called Sri Kukkuteswara Swamy. There is a huge beautiful idol of Nandi (bull) made from a single stone in front of the temple. The shrine of Sri Rajarajeswari, consort of Sri Kukkuteswara Swamy, is present beside the Shiva temple.

There is the temple of Puruhutika Devi inside the campus of Sri Kukkuteswara Swamy Temple. It is one of the Asta Dasha Shakti Peethas. After Daksha Yagna, Goddess Sati Devi's body part (back part) has fell down in this area, because of this place earlier people has called as Puruhoothika puram later it has changed as Peetika Puram. Finally it has changed Pithapuram. This temple is considered as the 10th Sakthi Peetham of the 18 Shakti Peethas.

This place is one among the Trigaya Kshetrams and has become famous as Pada Gaya Kshetram. Gaya Asura, a powerful demon who laid his body at the behest of Brahma for doing a great yagna for the betterment of people. He was so huge that his head rested in Bihar and his legs reached Pithapuram. The place where his legs rested was a pond where after this pond came to be known as Pada Gaya Sarovar. It is believed that whoever bathes in this sacred pond will be relieved of their sins.

The Kunti Madhavaswamy temple adjacent to Kukkuteswara temple is another major temple in the town. Kunti is said to have installed the image in this place, and so is called Kunti Madhavaswamy. This deity is said to have been worshipped by Vyasa, Valmiki and Agastya in the past. Swayambhu Sri Dattatreya Swamy is also in the Temple Complex. Sripada Srivallabha Swamy's idol is worshipped separately in the same complex. It is the only place where an idol of Sri Datta incarnation is worshipped. There are other shrines of various gods like Sri Rama, Ayyappa, Sri Vishveshwara and Sri Annapurna Devi, Sri Durga Devi.

0 Must Visit Places in Kakinada

All Places to Visit in Kakinada
All Kakinada Tour Packages

Places to Visit in Kakinada