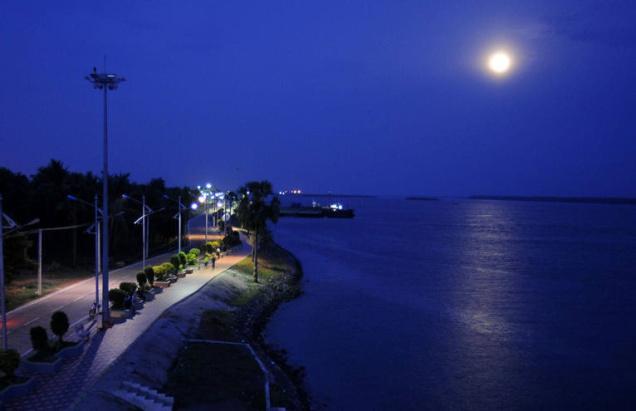 #5 of 8 Places to Visit in Kakinada

At a distance of 30 km from Kakinada, 62 km from Rajahmundry, 212 km from Vijayawada and 197 km from Vizag, Yanam is a town in the Indian union territory of Pondicherry; it is located in Yanam district, which forms a 30 sq. km enclave adjacent to East Godavari district in Andhra Pradesh.

Yanam was a Dutch colony prior to French takeover in the 1720s. Neelikundilu (indigo wells) are still found in the west of Yanam. The Dutch built a fort, which they used to store their currency, minted in nearby Neelapalli. The region was presented to the French general the Marquis de Bussy by the Vijayanagaram King as a token of gratitude for the help rendered by Bussy in his fight against the rulers of Bobbili.

For 200 years it was a French colony, and though united with India in 1954. It possesses a unique blend of French and Telugu culture prevailing in Andhra Pradesh. During French rule, the Tuesday market at Yanam was popular among Telugu people in the Madras Presidency who visited Yanam to buy foreign and smuggled goods during Yanam People's Festival held in January. Yanam is situated between the confluence of Coringa and Gowthami Godavari Rivers into Bay of Bengal. This place is surrounded by plenty of coconut trees.

There are number of places to visit in Yanam town. Sivalayam, Grand Mosque, Catholic Church, Yanam beach and Venkanna Babu Temple are the important tourist places in Yanam. The specialty of Venkanna Babu Temple is the Swamy Idol is having big mustaches. This temple was built by the kings of Rajamahendravaram in 15th Century. The Venkanna Festival is celebrated in the month of March every year in very grand manner.

Yanam beach is a beautiful beach. The pathway along the beach called the Ferry Road has a grand entrance with a massive idol of two elephants around a Shiv Linga. There is also a ship model here called Nagoor Meera Sahib Mandir at Ferry Road. One can hire boat and take a ride in mangrove forest on Gowthami Godavari River. Grand Mosque was built during French rule and has been remodeled a couple of times. St Ann's Catholic Church was built in authentic European style with all its decorative addition imported from France. The church is dedicated to Mother Mary.

The Government of Pondicherry in order to attract tourists has built a replica of the world-famous Eiffel tower in Yanam. The project with a budget of Rs 30 crore was built on a 14 acre-site at Guriampet overlooking the Bay of Bengal. The project was funded by Reliance Industries Limited and Gujarat State Petroleum Corporation (GSPC). The tower has a circular shaped restaurant which can accommodate 160 people and a conference hall which can hold 50 guests. The tower will provide a panoramic view of the Bay of Bengal but entry will be restricted to the restaurant for safety reasons.

The best time to visit Yanam is post monsoons and winter.

0 Must Visit Places in Kakinada

All Places to Visit in Kakinada
All Kakinada Tour Packages

Places to Visit in Kakinada