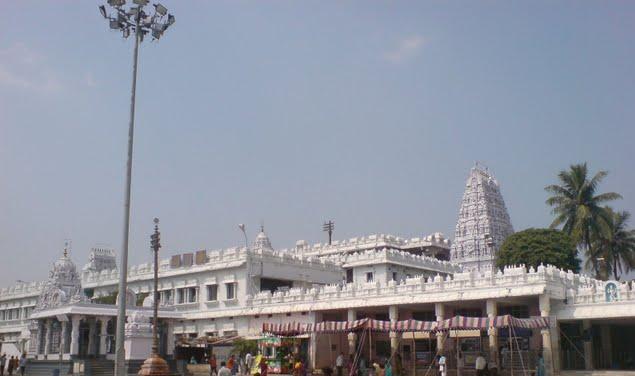 Peak Season: September to November & April to May

At a distance of 84 km from Rajahmundry, 123 km from Vizag, 234 km from Vijayawada and 483 km from Hyderabad, Annavaram is a village situated on the banks of river Pampa in East Godavari district of Andhra Pradesh. Annavaram is famous for Sri Satyanarayana Swamy temple and is one of the famous Places to visit in Andhra Pradesh. It is believed that all the wishes of devotees will be fulfilled when Satyanarayana Vratam is performed here.

It is believed that the presiding deity of the place blesses the devotees with anina varam (pronounced or wanted boon), the place is called Annavaram. According to history, Sri Krishnadevaraya of Vijayanagar used the secret underground passages in the hills to attack the enemy from both sides during his invasion of Kalinga. The Andhra revolutionary late Alluri Seetharama Raju used the secret quarters in these hill ranges, when he rebelled against the British Rule.

The shrine of Lord Veera Venkata Satyanarayana Swamy is situated on Ratnagiri hill top. The name of the Goddess is Ananta Lakshmi Satyavathi Devi. Meruvu the Lord of the hills and his consort Menaka did great penance and got two sons by the grace of Lord Vishnu. One was Bhadra and the other Ratnakara. Bhadra pleased Lord Vishnu with his devotion and penance, became Bhadrachalam on which Lord Sri Rama had permanently settled. Ratnakara desired to emulate his brother and succeeded in pleasing Lord Vishnu by his penance to settle on him as Veera Venkata Satyanarayana Swamy, Ratnakara remaining as Ratnagiri hill.

Most of the people in Andhra Pradesh perform Satyanarayana Vratam during housewarming ceremony and during marriages. There are also temples of Sri Rama and the shrines of Vana Durga and Kanaka Durga nearby. The festivals celebrated here include the Kalyanam festival in April-May, Devi Navaratri festival, Srirama Kalyanam, Kanakadurga Yatra, Prabha Utsavam, Teppa Utsavam and Jwalatoranam.

Visitors can avail different kinds of accommodation ranging from Normal rooms to AC Suites in various choultries and guest houses maintained by temple authorities on the hill. Advanced reservation facility is also available for accommodation.

How to Reach Annavaram

How to Reach Annavaram - Full Details

Top 10 Places to Visit in Annavaram

#1 of 11 Places to Visit in Annavaram

At a distance of 2 km from Annavaram Railway Station, Sri Satyanarayana Swamy Temple is situated on Ratnagiri hill. The Ratnagiri hill is about 300 feet above sea level with lot of greenery around and the Pampa River encircling the hill. About 460 stone steps lead to the temple from the bottom of the hill. It is believed that all the wishes of devotees will be fulfilled when Satyanarayana Vratam is performed here.

This temple was constructed in the Dravidian style in the year of 1891 by Raja Ramanarayana, the then zamindar of Gorsa and Kirlampudi estates. It is said that the Lord came into his dream and ordered the temple construction. He traced the idol on the hill, worshipped it and installed it at the present spot. Subsequently the temple was reconstructed during 1933-34 and during 2011-2012. According to history, Sri Krishnadevaraya of Vijayanagara used the secret underground passages in the hills to attack the enemy during his invasion .....

#2 of 11 Places to Visit in Annavaram

At a distance of 2 Kms from Annavaram Railway Station, Pampa River is located at bottom of the Ratnagiri hill on which Sri Satyanarayana Swamy Temple is situated.

There is a barrage built on Pampa River at bottom of the hill with boating facility. It is called Pampa Sarovara and boat ride here gives a memorable experience.

#3 of 11 Places to Visit in Annavaram

At a distance of 15 kms from Annavaram, the Thalupulamma Talli Temple is situated between Annavaram and Tuni in Visakhaptanam district.

Talupulamma Talli Temple is the most famous and well known place in AP and people visit for offering pooja to the Goddess after purchasing a new vehicle. People offer goats, chicken/hen in this place to the goddess. The temple is situated in between a hill and surroundings are very scenic. People have very strong belief on this Goddess and believe that their wishes will definitely get fulfilled after visiting this temple.

#4 of 11 Places to Visit in Annavaram

At a distance of 10 km from Kakinada Town Railway Station, 66 from Rajahmundry and 37 from Annavaram, Uppada Beach is located on Uppada Road and it offers a relaxed and rejuvenating ambience to enjoy the sun kissed sand and water. The wide shore is a major attraction of this beach. The clear water, the silver sand and the golden sun gifts the beach with a majestic beauty.

The wide shoreline and the gradual inclination into the water make it a safe beach. One can have a variety of activities at this beach. Shore activities like cricket, football, jogging and trekking can be fun and rejuvenating. The local fishermen along the beach are very friendly and also, one could get an experience of going along with the local fishermen for deep water fishing.

The sunrise and the sunset are very worth watching at this beach. This riveting seashore also has a beautiful well maintained park that adds to its beauty. One can find snack bars and .....

#5 of 11 Places to Visit in Annavaram

#6 of 11 Places to Visit in Annavaram

#7 of 11 Places to Visit in Annavaram

#8 of 11 Places to Visit in Annavaram

#9 of 11 Places to Visit in Annavaram

At a distance of 20 km from Chintapalle, 77 km from Ankapalle, 92 km from Araku Valley, 115 km from Vishakhapatnam, 136 km from Kakinada, 176 km from Rajahmundry, 240 km from Bhadrachalam, 325 km from Machilipatnam, 333 km from Vijayawada, 364 km from Guntur, and 552 km from Hyderabad, Lambasingi, or Lammasingi is a small hamlet in Visakhapatnam district of Andhra Pradesh. Also known as Korra Bayalu, it is one of the popular tourist destinations to visit in Andhra Pradesh.

Fondly called the 'Kashmir of Andhra Pradesh', the little hamlet of Lambasingi is situated at an altitude of 1025 m in the beautiful and lushly forested Eastern Ghats of Andhra Pradesh. One of the best-kept secrets of Andhra Pradesh, the tiny village is known for its majestic hills, quaint valleys, and chilling temperatures. This village is the only place in all of South India that experiences snowfall as the temperatures drop significantly. Lambasingi is also known by another name- Korra Bayalu, which means 'if .....

At a distance of 602 km from Hyderabad, 355 km from Vijayawada, 168 km from Kakinada, 203 km from Rajahmundry and 444 km from Bhubaneswar, Visakhapatnam (also called Vizag) is a coastal & port city in the state of Andhra Pradesh, located on the shores of Bay of Bengal. It is the headquarters of Visakhapatnam district and is the base for Eastern Naval Command of the Indian Navy. Vizag is also one of the top places to experience Andhra Pradesh tourism.

The city of Vizag, as Visakhapatnam is popularly called, derives its name from the Hindu God of valour, Visakha. The city is located beautifully among the hills of the Eastern Ghats with facing towards the Bay of Bengal. According to the Archaeological records, Visakhapatnam was built by Kulotunga Chola between the 11th and 12th centuries AD. Kailasagiri, Rama Krishna Beach and Rishikonda Beach are among the must include places in your Vizag tour packages.