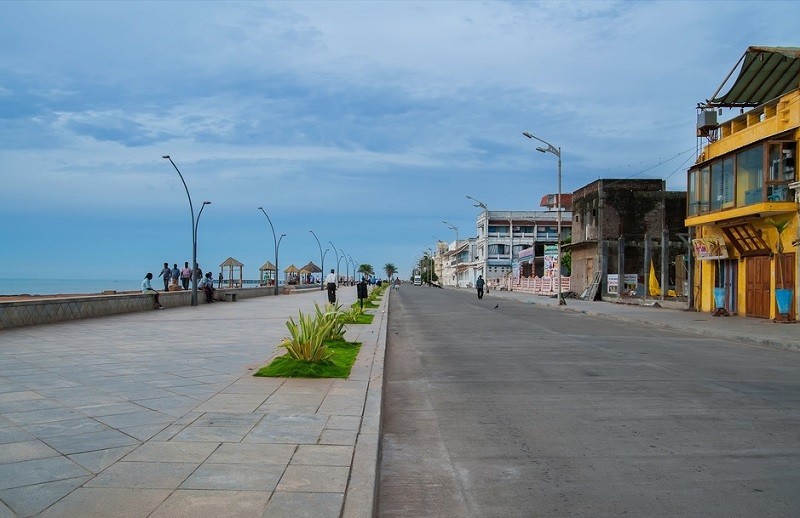 At a distance of 170 km from Chennai, 204 km from Trichy, 233 km from Tirupati, 335 km from Madurai, 639 km from Trivandrum, 578 km from Kanyakumari, 96 km from Mahabalipuram, 368 km from Bangalore and 564 km from Kochi, Pondicherry or Puducherry is a city and capital of the Union Territory of Pondicherry and is one of the most popular tourist destinations you must include in honeymoon packages. It is among top 2 day trip from Bangalore and Chennai. Pondicherry is located along the Coromandel Coast of Bay of Bengal.

The Union Territory of Puducherry comprises of four coastal regions namely Puducherry, Karaikal, Mahe and Yanam. Puducherry and Karaikal are situated on the East Coast of Tamil Nadu, Yanam in Andhra Pradesh and Mahe on the West Coast in Kerala.

According to legend, Pondicherry was known by the name Vedapuri and this place is also believed to be the abode of the revered sage, Saint Agasthya. Pondicherry had trade relations with Rome during 1st century AD. Roman pottery excavated from Arikamedu near Pondicherry dates back to 1st century AD. Pondicherry was ruled by the Pallava dynasty in 4th century AD followed by different southern dynasties like the Cholas, Pandyas, Vijayanagar kings and later by the Sultanate of Madurai.

The unique location of Pondicherry captured the attention of Portuguese, Dutch, English and French. Pondicherry came under the rule of the French in 1673 and since then it became the site for the battle between the British and the French. Pondicherry remained as the capital of French India for about 300 years, before it attained its independence in 1954. It was in 2006 that the name Pondicherry was changed to Puducherry, which means 'New Village' in Tamil language.

How to Reach Pondicherry - Full Details

Top 10 Places to Visit in Pondicherry

#1 of 29 Places to Visit in Pondicherry

The beach is extremely attractive as the sands are very clean and the water is crystal clear. The Paradise Beach is situated close to Cuddalore main road and it houses the famous Chunnambar resort.

Visitors have to cross the Chunnambar backwaters by boat to reach Paradise Beach. These boats leave from Chunnambar boathouse around 6 km from Pondicherry. The beach has shelters and palm trees for shade and protection from the sun and rain. There is one small bar which serves .....

#2 of 29 Places to Visit in Pondicherry

It's a long stretch of rocky beach with benches and wide pavement for morning and evening walks. It is adjacent to Goubert Avenue, the historical section of the city which has several beautiful colonial buildings. This long stretch has statues of Jeanne d'Arc Dupleix, Mahatma Gandhi and War Memorial. There is also a 27 meter .....

#3 of 29 Places to Visit in Pondicherry

At a distance of 13 km from Pondicherry, Auroville (City of Dawn) is an experimental township in Villupuram district of Tamil Nadu. It lies on the East Coast Road and was founded by Mirra Alfassa in 1968 and was designed by the French architect Roger Anger. The word Auroville essentially means a universal town, where people can live peacefully, irrespective of nationality, colour, caste and creed. The purpose of Auroville, Pondicherry was to emphasize human unity, promoting message of the founder of Auroville, Mirra Alfassa. It is one of the best Pondicherry places to visit .

Auroville was officially inaugurated on 28th February, 1968 and was endorsed by UNESCO and the Government of India. During its inauguration, soil from over 124 countries was placed and mixed inside a lotus shaped urn, symbolizing universal oneness. Auroville was built to welcome people from all over the world to live together .....

#4 of 29 Places to Visit in Pondicherry

At a distance of 6 km Pondicherry Bus Station, Chunnambar Boat House also known as Plage Paradiso is famous for its backwaters and it's a popular boating venue and is. Located on the Cuddalore main road, the backwater is situated at a point where the Chunnambar River meets Bay of Bengal. Paradise beach is usually reached by boat from Chunnambar Boat House.

#5 of 29 Places to Visit in Pondicherry

The Aurobindo Ashram is one of the most visited tourism sites in Pondicherry. This ashram comprises several buildings and there are around 1,200 members along with 400 students living in this center.

The serene Aurobindo Ashram comes alive during the festivals. Thousands of tourists, followers and visitors come here. Despite the large crowd the members maintain discipline within the complex, restoring its peaceful environment. The ideals of the ashrams are based on the teachings of Sri Aurobindo and Mira Alfassa. The ashram contains a library, printing press, playground, art gallery, a dispensary/nursing .....

#6 of 29 Places to Visit in Pondicherry

At a distance of 3 km from Pondicherry Bus Station, Pondicherry Museum is situated in the Bharathi Park and is known for its unique collection of sculptures. It is one of the popular places in Pondicherry Sightseeing.

This museum has an excellent gallery with sculptures and has the remains of archaeological findings from the Arikamedu Roman settlement. This gallery is known to have artifacts belonging to Cholas and Pallavas rule of Pondicherry and Karaikal. Burial urns, French furniture, terracotta figures, crockery, guns, swords, paintings, mirrors and several other things dating back to different periods are preserved here.

The painting section includes Tanjore and glass paintings, colonial prints and contemporary oils, pastels and water colors. It has bronze statues of several gods and goddesses along with handicrafts, art work and temple lamps. The ground floor of the museum has a palanquin .....

#7 of 29 Places to Visit in Pondicherry

The Botanical Gardens is spread over an area of 22 acres in the center of the city. The garden is a famous retreat for locals and tourists. It is spread with pruned trees, flower beds and fountains. Perrotet was responsible for transforming the place into a botanical garden. His memorial can be seen inside the garden premises. He introduced many exotic plants from all over the world. In 1960, after the Transfer of Power from the French, the garden became the hub of horticultural development in Pondicherry.

#8 of 29 Places to Visit in Pondicherry

At a distance of 3.5 km from Pondicherry Bus Station, The Bharathi Park, also known as the Government Park is situated in the central region of the old colonial town of Pondicherry.

Government Park was once the location of the first French garrison and Fort Louis which were destroyed by the British. In 2006 the park was renovated and several new sections were included to make it more attractive. It is a beautiful and peaceful park ideal to spend time with family or for a morning / evening walk.

The Aayi Mandapam or the Park Monument is a famous monument which lies at the center of the park. At one point, Aayi Mandap was the main water source for Pondicherry town.
The Mandapam is an imposing structure that flaunts brilliant Greco-Roman architecture. The presence of flowerbeds, well-manicured lawns and beautiful fountains around the monument make it an attractive place.

There is a wonderful children's play area with several playground equipment. This park is surrounded .....

#9 of 29 Places to Visit in Pondicherry

At a distance of 3 km from Pondicherry Bus Station, The Manakula Vinayagar Temple is one of the famous ancient temples dedicated to Lord Ganesha and is a popular pilgrimage site in Puducherry.

Manakula Vinayagar Temple was in existence before the French came and settled in Pondicherry and the idol of Lord Ganesha is locally known as Vellakkaran Pillai. The French Jesuits and missionaries tried to demolish the temple several times, but every time local population saved the temple.

Facing the east near Bay of Bengal, the temple was known as Bhavaneshar Ganapathy, now called as Manakula Vinayagar. In Tamil Manal means sand and Kulam means pond near the sea. The temple is spread over an area of about 8000 sq. ft with outer mandapam, raja gopuram and outer enclosure. Measuring 18 feet in height, the gold plated kodikambam is a spectacular highlight of this temple. The outside wall of the temple depicts various forms of the Ganesha with its timelines and locations. The rich architectural .....

#10 of 29 Places to Visit in Pondicherry

At a distance of 2.5 km from Pondicherry Bus Station, The Statue of Mahatma Gandhi is located on the beach front of Pondicherry. Built by the famous sculptor Roy Choudhary from Madras School of Art and Crafts, it is one of the major landmarks in Pondicherry. It is surrounded by eight exquisitely carved monolithic granite pillars which were brought from Gingee Fort.

The statue stands 4 m (13 feet) high is the 3rd biggest Mahatma Gandhi statue. It was inaugurated on January 26, 1965. The square in front of the statue referred to as Gandhi Thidal, plays host to various cultural and musical activities through the year.

There is a tunnel below the Gandhi statue which is believed to be leading to Gingee Fort. There were some efforts to explore the tunnel. But, after a few people died of suffocation, the tunnel was closed.

Best Places to Visit in Pondicherry