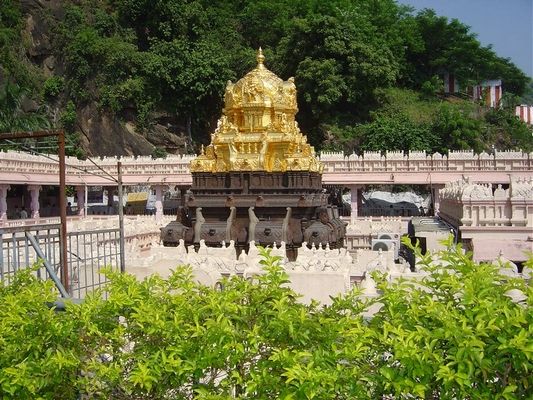 #1 of 27 Places to Visit in Vijayawada

At a distance of 4 km from Vijayawada Railway Station, Kanaka Durga Temple is located on the Indrakeeladri hill on the banks of Krishna River in Vijayawada. Kanaka Durga, the goddess of power and riches is considered the presiding deity of Vijayawada. It is one of the famous temples in South India. The shrine also called Sri Durga Malleswara Swami Temple dates back to the 8th century.

According to legend, goddess Durga killed demon Mahishasura and enshrined on the Keela Mountain with eight arms in the form of Mahishasura Mardini as she had given boon to Keela. Indra and all other gods worshipped the goddess Kanaka Durga on the hill which later known as Indrakeeladri. In Dwaapara Yuga, Arjuna did great penance on Indrakeeladri for Lord Shiva in order to get the most powerful Astra called Paashupataastra. Later, Lord Shiva appeared to fulfill the desire of Arjuna and called him as Vijaya (victorious). The place came to be known as Vijayawada after Arjuna's victory.

The deity in the temple is regarded as Swayambhu (self-manifested) and considered very powerful. In the central sanctum, the 4 feet high image of the deity is decorated in glittering ornaments and bright flowers. Goddess is shown eight arms, each holding a powerful weapon, in a standing posture over the demon Mahishasura. Though exact origins of the temple are unknown, inscriptions of different dynasties are found in the temple. It is said that Adi Sankara visited this temple and installed the Sri Chakra here.

Adjacent to the Kanaka Durga temple on the Indrakeeladri is the shrine of Malleswara Swamy. The installation of Vijayeswara is said to have been done by Arjuna. Thribhuvana Malla, Western Chalukya King of the 10th century has contributed a lot to the expansion of the temple.

Navaratri, Saraswati puja and Theppotsavam are the main celebrations held at this temple. Thousands of devotees from the state throng the temple after a holy dip in the River Krishna

Though there is motor-able ghat road up to the temple, many people prefer to walk through the steps to reach the temple.