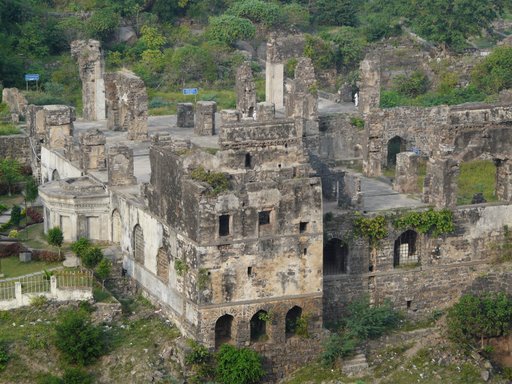 #5 of 27 Places to Visit in Vijayawada

At a distance of 24 km from Vijayawada Railway Station & 262 km from Hyderabad, Kondapalli Fort, also known as Kondapalli Kota, is located at Kondapalli Village in the Krishna district close to Vijayawada.

This 14th century Fort is believed to have been built by the Reddy King of Kondaveedu, Prolaya Vema Reddy. Spread over an area of 18 sq.km, this Fort is said to have served as a recreational palace for the king. The Fort was also used as a business centre. Later, the fort went into the hands of Gajapati rulers of Orissa. In the year 1520 AD the King, Sri Krishna Devaraya of Vijayanagara Empire has captured the Kondapalli fort in Kalinga wars. Later, the fort came into the hands of Qutubshahi Kings in the 16th century. During the colonial rule, the British soldiers were given training in this fort.

Situated on a hill, the fort has an impressive three storied rock tower protected by three levels of entries. The main entrance gate is known as the Dargah Darwaza, which has been made out of a single slab of granite. Another entrance gate of the fort is known as the Golconda Darwaza. The major attraction of the fort is the Tanisha Mahal or Palace, which is located on a crest between two hills. Near the fort there is a Dargah of a Persian Saint, Gareeb Sahib. One can still find several other ruined structures within the premises of the fort. There is a Gajasala, where elephants were kept, Queen's palace, Virupaksha Temple, Dining hall, a reservoir and prisons.

Kondapalli is also famous for its wooden toys. Kondapalli toys are carved out of locally available special light softwood known as Poniki. These toys are brightly coloured and adorned with beautiful designs of animals, birds, fruits and vegetables, mythological and religious figures. Kondapalli toys are very popular world-over. Today, Kondapalli Fort is a major tourist attraction to visit near Vijayawada.