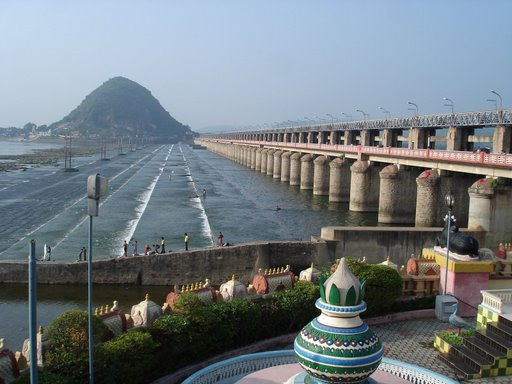 #3 of 27 Places to Visit in Vijayawada

At a distance of 2 km from Vijayawada Railway Station, Prakasam Barrage is a 1223.5 meter long modern regulator and Road Bridge built across the River Krishna and is located at the southern entrance of Vijayawada.

The beautiful backwaters formed by the barrage give the city a unique setting with the backdrop of Kanakadurga Hill. The barrage was first built by Sir Arthur Cotton in 1855 and later reconstructed in the 1950s. This is one of the earliest major irrigation projects in Southern India. It was named after the first Chief Minister of Andhra Pradesh, Tanguturi Prakasam. The scheme irrigates nearly one million hectors of land, converting the Krishna delta into a rich granary in Andhra Pradesh. This barrage also supplies water to Buckingham canal which was constructed as inland navigation canal initially but later used as irrigation water supply canal.

The idea of constructing a dam across the river Krishna dates back to 1798. It began with captain Buckle and was revised in 1839 and 1841 by captain Best and captain Lake. After the endorsement of Major Cotton, the dam was approved on 5 January 1850. The construction was started in 1852 and completed in 1855.

Besides irrigation, the dam provides a spectacular view of the lake and has become a major tourist attraction of Vijayawada. The lake around the barrage is not so deeper and has a shallow effect on the sides thus a good picnic spot. Boating along with few water sports activities are available here. The famous Bhavani Island is situated amidst the backwaters of the barrage.