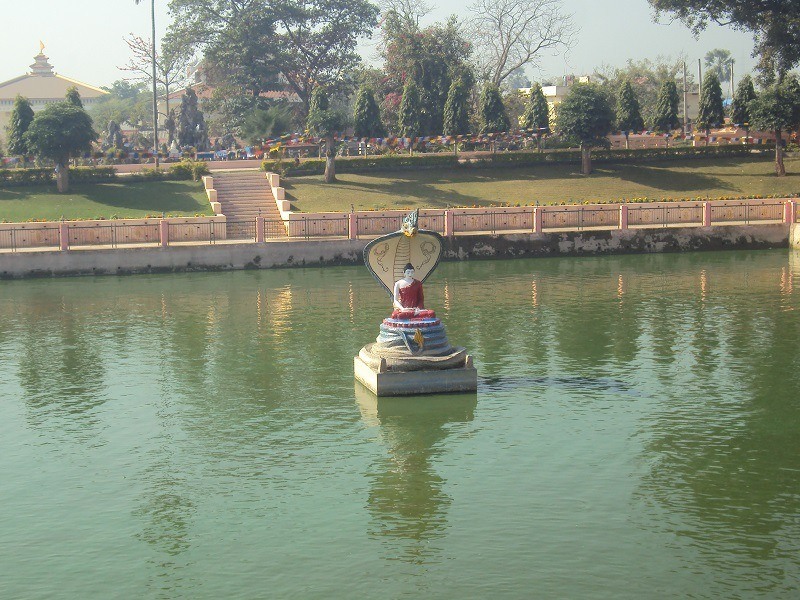 At a distance of 1.5 km from Bodhgaya Bus Station, Muchalinda Lake or Lotus Pond is a sacred lake in Bodh Gaya, Bihar. Situated right of Mahabodhi Temple, it is one of the best places to visit in Bodhgaya.

Named after Muchalinda, the king of the serpents, the Muchalinda Lake is yet another peaceful spot in Bodh Gaya. There is a legend associated with this lake. It is believed that during Buddha's sixth week of meditation, a huge storm broke out here while Buddha was meditating. It was then that Muchalinda came out from his abode beneath the lake to protect Lord Buddha from the uproar of the storm and used his hood so as not to disrupt Buddha from his meditation. The structure depicting the epic story is placed at the center of Muchalinda Lake. On the boundary of the lake, one may found the epic tale inscribe on the rocks.

A huge number of people visit Muchalinda Lake, especially the Buddhist Monks for meditation as the lake is surrounded by lush greenery and a peaceful atmosphere. The pond water is sacred and has thousands of fishes, which you can feed with puffed rice. The lake looks amazing at night because of the decoration and the lightings on the edges of the lake.