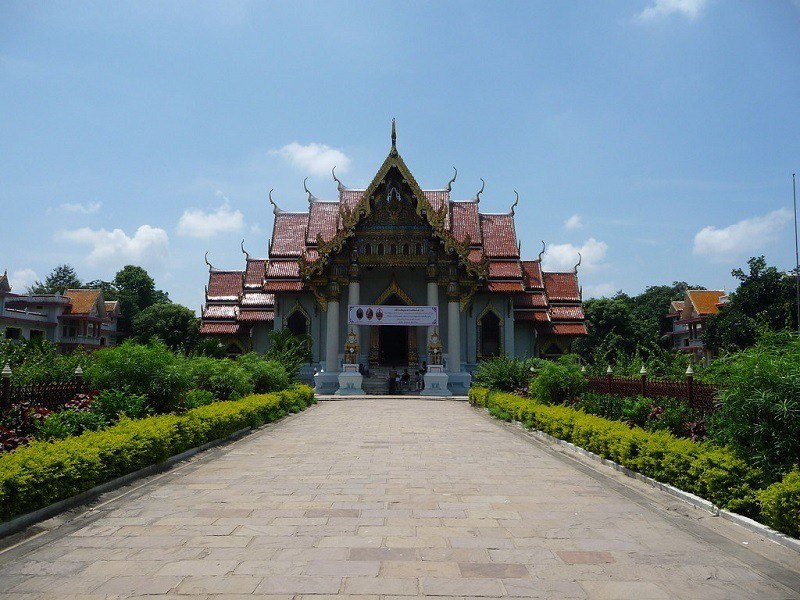 At a distance of 700 m from Mahabodhi Temple, and 1 km from Bodh Gaya Bus Station, Wat Thai is a Thai monastery located in Bodhgaya, Bihar. Situated near Maya Sarovar, it is one of the exquisite monasteries in Bodh Gaya and among the must-visit places in Bodh Gaya.

Popularly known as Thai Monastery, Wat Thai Buddhagaya was established in 1956 by the government of Thailand on the request of the former Prime Minister Jawaharlal Nehru to strengthen the relationship between the two countries. The monastery was constructed with an idea of propagating the philosophies of Buddhism among the masses. It is the only Thai Temple in India. The place abounds with peace and serenity and is ideal for solace seekers and those looking for a break from the humdrum of city life.

Known for its exceptional architecture and stunning beauty, Wat Thai Bodhgaya is strikingly similar to the temples of Bangkok and is richly gilt and highly ornamental. It has a sloping roof covered with golden tiles. Considered as one of the most beautiful monasteries in Bodh Gaya, the sanctum of the temple houses a beautifully carved gigantic bronze statue of Lord Buddha. A 25 m high statue of Lord Buddha has been recently built in the garden near the Wat Thai Temple. One can also find several images relating to the life of Lord Buddha that have been carved with Buddhist scriptures.

Besides, Meditation classes are held in the morning and evening at Wat Thai. Every year in January, the monastery organizes retreats that are held in complete silence. More than a hundred people participate in the retreat and together they practice meditation and yoga here. There is also a guest house on the monastery premises for the convenience of pilgrims.