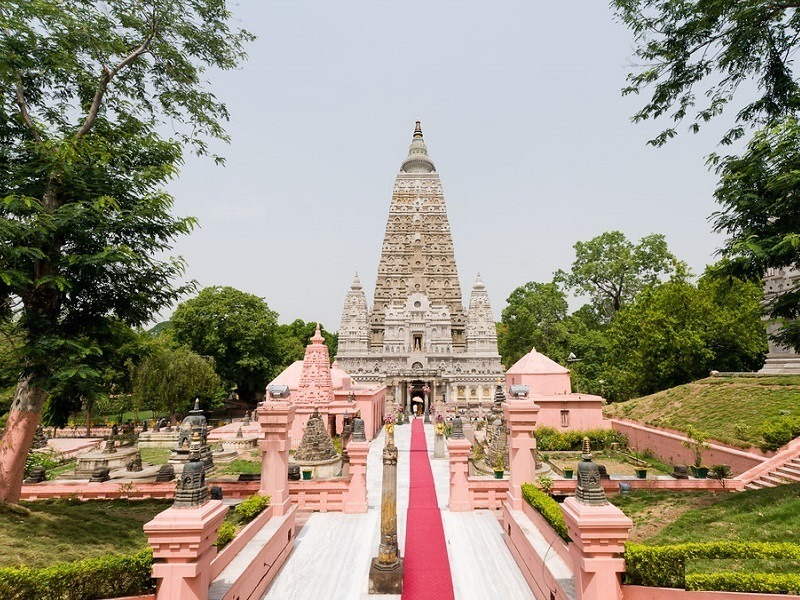 Place Location: At The Center Of Bodh Gaya Town

At a distance of 1.5 km from Bodhgaya Bus Station, Mahabodhi Temple is an ancient Buddhist temple located in Bodh Gaya, Bihar. Situated near Muchalinda Pond, it is one of the oldest Buddhist temples in India and among the prime places to visit in Bodh Gaya as part of the Buddhist Pilgrimage Tour in India.

Situated on the banks of Niranjana River, Mahabodhi Temple Complex is one of the four holy sites related to the life of the Lord Buddha. The temple is fondly called as the 'Great Awakening Temple' as this is the very place where Lord Buddha is said to have attained enlightenment. The original temple was built by Emperor Ashoka in the 3rd century BC, however, the present structure is estimated to be erected between 5th and 6th century BC during the Gupta Period. The Temple was restored by the British in the year 1880 and the Indian Government after independence. Due to its religious and historical significance, the temple has been declared as a UNESCO World Heritage Site in the year 2002.

Built-in the classical style of Indian temple architecture, the temple spreads over 5 hectares. Mahabodhi Temple is constructed of brick and is one of the oldest brick structures to have survived in eastern India. The temple has a 55 m tall pyramidal shikhara (tower) that comprises several layers of niches, arch motifs, and fine engravings. Four towers, each identical to its central counterpart but smaller in size, adorn the corners of the two-story structure. A 10th century, 2 m high gold-painted statue of Buddha seated in the Bhumisparsa Mudra or the 'Earth touching posture ' is placed in the sanctum sanctorum of Mahabodhi Temple. In 2013, the upper portion of the temple was covered with gold, as a gift from the King and devotees of Thailand.

The Mahabodhi Temple is surrounded by two distinct types of railings on all four sides, and they are about two meters high. The old railings are made from sandstone, date back to 150 BC, and have illustrations of Goddess Laxmi being bathed by elephants and of Lord Surya riding a chariot that is being drawn by four horses. The newer ones are made of unpolished granite and are believed to have been constructed in the Gupta period. They have carvings of stupas or reliquary shrines, 'garudas' or eagles, and lotuses made out on them.

The greatest attraction of the Mahabodhi Temple is no doubt the famous Bodhi tree, situated to the left of the temple and is believed to be the direct descendant of the actual tree under which Lord Gautam Buddha meditated and attained enlightenment. Many monks and devotees can be seen performing countless prostrations to the tree even today. It's a purificatory ritual, and some monks are known to do up to 1,00,000 prostrations at one time.

Next to the Bodhi Tree, there is a platform attached to the main temple made of polished sandstone known as Vajrasana (the Diamond Throne), originally installed by Emperor Asoka to mark the spot where Buddha sat and meditated. Also, the devotees can visit six other places located inside the temple complex where Lord Buddha used to meditate after getting enlightenment. Besides, the premises of the temple include several smaller stupas and Buddha statues.