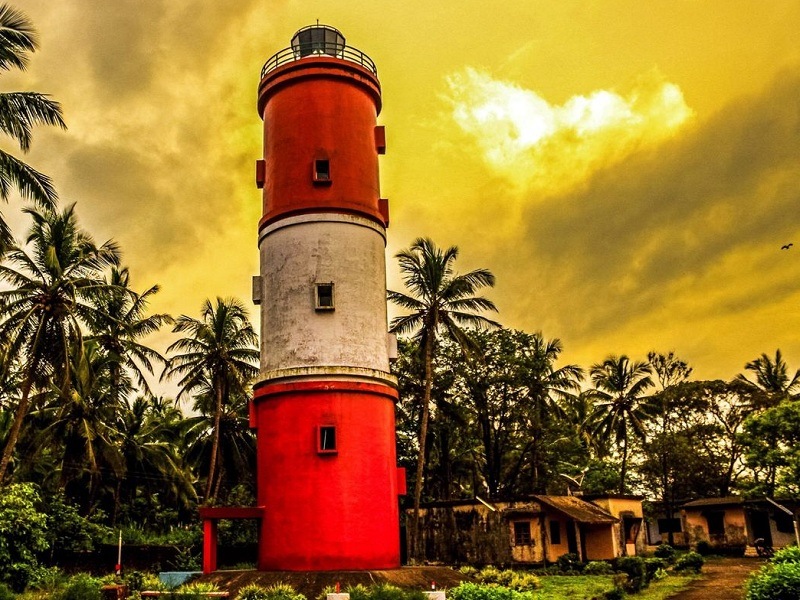 At a distance of 2 km from Kannur Railway Station, Kannur Lighthouse is a lighthouse situated near Payyambalam Beach in Kannur town of Kerala. Adjacent to the Sea View Park and the Government Guest House, it is the fourth largest lighthouse in Kerala and one of the popular Kannur Tourist Places.

Also known as Cannanore Lighthouse, the lighthouse is still active and overlooks the Arabian Sea. In 1843, the British introduced a system of hoisting a lantern with an oil wick lamp in order to warn ships. A masonry pedestal was constructed in 1903 on the rampart of Kannur fort and placed a double wick oil lamp inside the 4th order dioptric lens and lantern on this pedestal. The light was made available during fair seasons only, from September to May every year. In 1939, the light was shifted on to a 16-metre steel trestle erected on the northern bastion of the fort. In 1948, the system was replaced by a flashing light which uses Dissolved Acetylene gas as fuel. This light was functional till the present lighthouse was constructed at the present location in 1976.

Painted in red and white colours, the present lighthouse has a height of 23 meters and uses modern PRB-42 equipment with Type 'D' sealed beam lamps. The GI lantern house installed at the station is 2.4 meters in diameter and was fabricated at Cochin. Today the lighthouse lights up the skies every night, and offers a solitary light that is useful to the hundreds of fishing boats in the region. It is possible to go up to the top by climbing a spiral staircase. The vantage point offers spectacular views of the entire Kannur city, the vast expanse of the Arabian Sea, Baby Beach and some parts of Payyambalam Beach. On windy days, the lighthouse will close its doors to visitors.

There is a small museum that displays equipment used in lighthouses and also shows a documentary on lighthouses. It is the fourth museum of its kind in the country after Alappuzha, Chennai and Mahabalipuram. A gigantic optic, used in Lakshadweep Lighthouse during the 1885-1962 period, a 19th century double wick lamp of Kannur Lighthouse, a huge fog bell used to alert shipmen and a deep sea buoy are some of the exhibits displayed at the Kannur Lighthouse museum. Another interesting feature of this museum is the Mini Theater where people can sit and watch a short film showing history of the lighthouse. There is a light and sound show in the evening. The surrounding park area is also particularly well-maintained and ideal for a stroll.