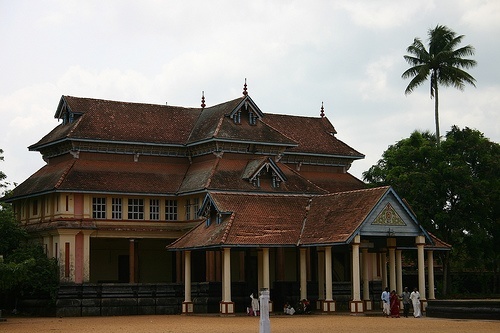 #15 of 28 Places to Visit in Pathanamthitta

Travel Tips: This place can be visited while going to Thiruvalla from Pathanamthitta

At a distance of 24 Kms from Pathanamthitta, Mahadeva Temple (also known as Bhagavathy Temple) is located in Chengannur, on the way to Thiruvalla. It is one of the oldest Mahakshethrams of Lord Shiva. This temple is dedicated to Lord Siva and Goddess Parvati

The temple was constructed in 6 acres land in typical Kerala architecture, many centuries back. But the current structure was renovated by Vanghipuzha Thampuran in 18th century, after it was damaged by a major fire accident. Lord Shiva is found facing East and Parvati Devi is found facing West. The image of the deity is made in Panchaloha.

The specialty of this temple is that the deity gets menstrual period, a unique phenomenon not found in any other temple. Legend tells that Shiva and Parvati came to reside at this place during the goddess's menstrual period.

The annual festival is celebrated for 28 days in the month of Dec / Jan. Shivaratri and Chitra Pournami are also celebrated in a grand manner.