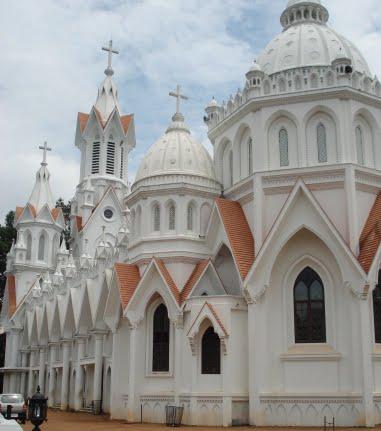 #3 of 28 Places to Visit in Pathanamthitta

At a distance of 9 km from Pathanamthitta, St. George Orthodox Church is a sacred church situated at Chandanapally in Pathanamthitta. It is one of the biggest churches in South India, and among the top pilgrimage sites near Kochi.

St. George Orthodox Church, Chandanapally or Chandanapally Valiyapalli is dedicated to St. George, the patron saint of England, who slew the dragon snake. As a village Chandanapally, literally means the abode of sandalwood trees, once had snakes of myriad shapes and venom crawling all over. The residents of the village reposed their faith in the saint to save them from not just snakes but ghosts, demons, and other dangers that lurked in the darkness. The first church in Chandanapally was built in 1810. It was renovated in 1875 and consecrated by his holiness Mar Abdullah, the Later Patriarch of Antioch. There was a reconstruction in 2000 which is famous for the huge size of its structure.

This church has wonderful architecture, which is a blend of Christian, Muslim, and Hindu sculptured art, gothic style of towers, and roof in Persian style. The new church structure resembles St Peter's Basilica in Rome. The Kalkurishu or cross-cut from stone which has carvings of saints and angels is the main attraction and shelter for the pilgrims of the church. Whomsoever shelters under st. George here in this church will be rewarded regardless the caste, creed, religion, colour. Hence, many of the pilgrims are non-Christians who believe in the great healing powers of St. George.

The famous Festival of Chandanapally is celebrated on May 7th & 8th every year, which attracts lakhs of Pilgrims. Chembuduppu (meaning picking of the copper vessel) is a special ritual observed during the festival every year. The main offering is rice cooked in a copper pot, which is taken to Kuthirappura by all the pilgrims from different places and the different religions who had gathered there for the celebrations. Later this cooked rice will be taken to their homes by the pilgrims.