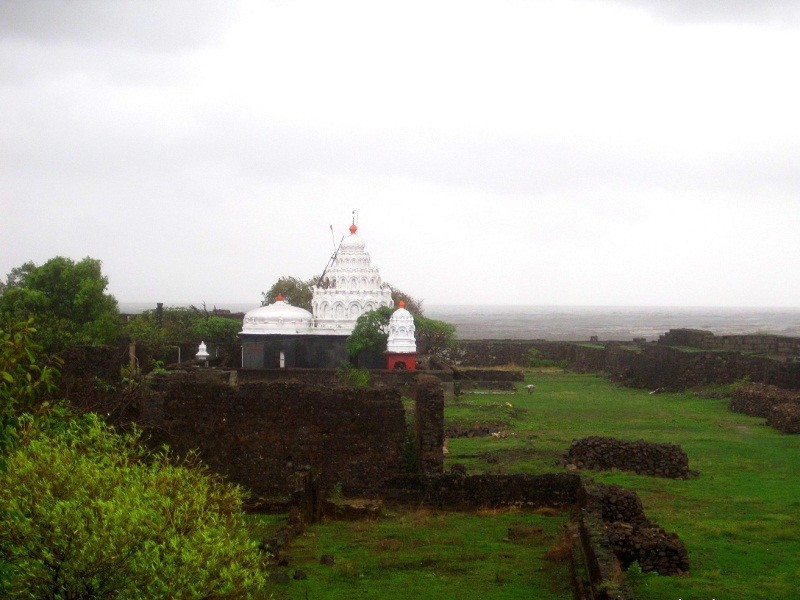 Travel Tips: Tangas are also available to reach the fort from Alibaug Beach.

At a distance of 1.5 km from Alibaug Beach and 3 km from Alibaug Bus Stand, Kolaba Fort or Kulaba Fort is an old military fortification situated in the Arabian Sea near the shores of Alibaug in Maharashtra. It is one of the must include places in Alibaug Tour, and among the famous heritage sites near Mumbai.

Kolaba Fort was built by Maratha warrior Shivaji Maharaj in the year 1680 CE after the entire south Konkan came under his control. In 1662 CE, he strengthened and fortified Kolaba fort to make it one of his chief naval stations. The command of the fort was given to Darya Sagar and Manik Bhandari under whom Kolaba fort became the center of the Maratha attacks on British ships. It is one of the prominent places of sightseeing in Alibaug.

Later in 1713 CE, Kolaba Fort along with various other forts was handed over to Kanhoji Angre, chief of the Maratha Navy, under the treaty with Peshwa Balaji Vishwanath. The military post was utilized as the chief base for the army of Kanhoji Angre. Due to the strong fortification of the Kolaba Fort, it was impossible for the British and the Portuguese rulers to win over the land. The Angres ruled over this part of the land till 1840 AD when the British conquered it.

Kolaba Fort consists of strongly fortified walls that are 25 feet high with 17 bastions for defensive fire at the time of any enemy attack. There are two main entrances with one facing the sea and the second entrance is towards Alibag. The door facing the land was known as the 'Maha Darwaza' and it was the entrance for the royal family. These are teak wood doors with iron spikes embedded in many places. The doors were engraved with beautiful pictures of various animals like tigers, lions, and peacocks.

There are several wells inside the premise that supplied fresh water to the residents. There is also Siddhivinayak Temple located inside the structure. The shrine was established in 1759 AD by Raghoji Angre. The entire fortification is being made with enormous stone blocks. There is also a Dargah of Haji Kamaluddin Shah on the fort. Near the northern wall of the fort lie, two English Cannons mounted on wheels.

To visit the fort area tourists can avail boat rides during high tides or can walk down or take bullock cart rides during low tides. The fort is open all through the year and ASI charges a nominal token entry fee for the visit to the Kolaba fort.