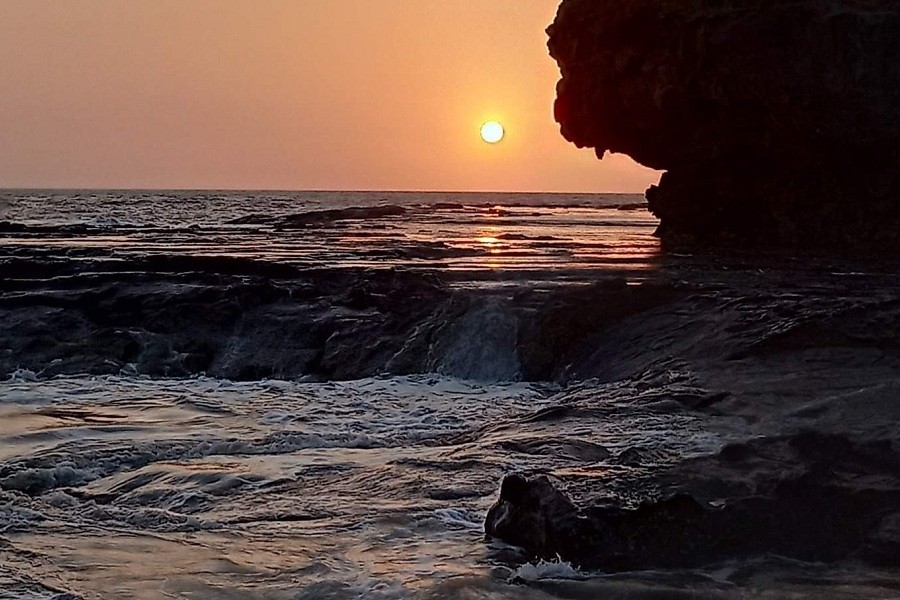 At a distance of 19 km from Shrivardhan, 61 km from Dapoli, 95 km from Raigad, 114 km from Chiplun, 122 km from Alibaug, 132 k from Mahabaleshwar, 159 km from Lonavala, 175 km from Pune, and 213 km from Mumbai, Harihareshwar is a coastal town in Raigad district of Maharashtra, India. It is one of the popular weekend getaways from Pune, and Mumbai.

Situated on the Konkan coast, Harihareshwar is surrounded by four hills named Harihareshwar, Harshinachal, Bramhadri, and Pushpadri. The river Savitri enters the Arabian Sea from the town of Harihareshwar. This is one of the best Maharashtra beach destinations. This beach town is often called Southern Kashi because it is home to the Harihareshwar temple dedicated to Lord Shiva. The town is said to have been blessed by Lord Shiva. Hence Harihareshwar is often referred to as Devghar or 'house of God'.

Harihareshwar comes across as a pleasant surprise with some of the most peaceful and beautiful beaches along the Konkan Coast. Harihareshwar Beach, along with Shrivardhan and Diveagar Beaches forms a popular weekend beach destination from Pune and Mumbai. Diveaghar Beach & Temple, Kondvil Beach, Kelshi Beach, Velas Beach, Srivardhan Beach, Bankot Fort, and Ganesh Gully are some of the prominent places to visit in Harihareshwar.

Mumbai Airport is the nearest airport which is about 207 km from Harihareshwar. Pune Airport, located at a distance of approximately 181 km from the town can also be an option for travelers traveling through airways. About 60 km, Mangaon is the nearest railhead to Harihareshwar and has trains from many cities like Madgaon, Mumbai, Kochuveli, Sriganganagar, Okha, Ratnagiri, Kochi, Sawantwadi, and Mangalore. Mumbai Chhatrapati Shivaji Terminus & Pune Junction are the major railway stations situated at a distance of 213 km & 175 km from Harihareshwar. You can get down at any one of these stations and then make their way to Harihareshwar by booking a taxi. Harihareshwar is well connected by bus with Mumbai, Lonavala, Pune, Alibaug, Ratnagiri, Dapoi, and Srivardhan.

Being a popular beach town, the town of Harihareshwar has a lot of accommodation options in the form of resorts, guest houses, and homestays. Maharashtra Tourism Development Corporation has a resort on the south beach. Authentic Konkani dishes full of flavor and original elements are sure to be enjoyed here. One must try the famous and refreshing Kokam Sharbat here. Since this is a temple town, most common eateries are vegetarian, but you will find non-vegetarian menus at a few joints as well as options from a typical North Indian cuisine.

October to March is the best time to visit Harihareshwar when the weather is pleasant and suitable for sightseeing. While December-February is considered the peak season for tourism in Harihareshwar as the town celebrates the festival of MahaShivratri in February which attracts tourists from all around. The summers in Harihareshwr are quite warm, followed by a humid monsoon and pleasantly cool winters.

How to Reach Harihareshwar - Full Details

Top 10 Places to Visit in Harihareshwar

#1 of 12 Places to Visit in Harihareshwar

Harihareshwar Temple is one of the most ancient and renowned temples in the Konkan region of Maharashtra and among the most famous places to visit in Harihareshwar. The temple complex comprises two adjacent temples. One of them is a small Kalbhairav temple that needs to be visited first and the other is the main Harihareshwar temple dedicated to Lord Shiva. It is believed that Lord Shiva created Kalbhairava and blessed him with all mantras.

Built in the late medieval period, the main deity .....

#2 of 12 Places to Visit in Harihareshwar

At a distance of 10 km from Kondivli Beach, 21 km from Srivardhan, 25 km from Murud, 38 km from Harihareshwar, and 73 km from Alibaug, Diveagar Beach is a splendid beach situated at Diveagar on the Konkan coast of Maharashtra. This is one of the popular Harihareshwar tourist places, and also one of the favorite weekend getaways from Mumbai.

Stretches over 5 km, Diveagar Beach is a quaint amalgamation of greenery and azure water with gentle sprinkles of white sand. This beach is surrounded by Suru trees and a dense cover of belu trees as well. At one end of the beach is a fishing settlement while the other end offers a sanctuary to the migratory seagulls feasting in the creek waters. Diveagar Beach is not a flat beach unlike most of the other beaches in this region, be careful while playing in the waves as there are rocks strewn across some parts .....

#3 of 12 Places to Visit in Harihareshwar

At a distance of 10 km from Diveagar, 10 km from Shrivardhan, and 27 km from Harihareshwar, Kondvil Beach, or Kondivali Beach is a pristine beach situated on the Konkan Coast in Maharashtra. It is one of the secluded beaches in Maharashtra, and among the popular places to visit near Harihareshwar.

Situated between Shrivardhan, and Diveaghar, Kondivli Beach is quite serene, and away from the maddening tourist crowds of Mumbai and Pune. This is one of the stunning black sand beaches near Harihareshwar with the gently curved seashore, with some rocks and numerous trees.

The sands are unmarked by footprints and the road winds around low-lying cliffs from where tourists have to climb down to reach the waters. The currents are a bit unpredictable, but locals claim it's safe for swimming. The Shrivardhan cliffs, situated close to Kondivali Beach, are popular for trekking. The brownish-black sand of the beach with the lush forest makes it a delight to the visitors. There is a road .....

#4 of 12 Places to Visit in Harihareshwar

At a distance of 20 km from Diveaghar, and 21 km from Harihareshwar, Srivardhan Beach is a pristine beach located at Shrivardhan town in Raigad district of Maharashtra. It is one of the popular weekend getaways from Mumbai, and among the must-visit places as part of Harihareshwar Packages.

Stretches about 3 km long, Srivardhan Beach is a very clean and calm beach located along the Arabian Sea coastline. The majestic black sand coastline is bestowed with striking palm groves and mango plantations. The long pristine coastline of Srivardhan is most idyllic for a break from the hectic schedules of modern life and is considered as one of the best weekend getaways from Pune, and Mumbai.

The crashing waves against the black sand are worth seeing. One can find water sports like boating, paragliding, and water surfing at this beach. Kids can enjoy horse riding, camel riding, and Buggy riding as well. It is also an ideal place for swimming as the waters are shallow. Post noon, the tides .....

#5 of 12 Places to Visit in Harihareshwar

As the name suggests, Ganesh Gully is a narrow passage of about 3 feet wide. It is between two rocks, where a path is paved, leading to a sea-bed. It is said that an idol of Lord Ganesh is submerged in the water around 30 feet deep and can be seen only during low tide. Many tourists visit this place to have a glimpse of the Ganesh Idol. There are black rocks on the viewpoint which meet the sea. The sea waves collapse on these rocks enhancing the beauty of this viewpoint.

Going up there itself is an adventure and further adds to the overall experience like nothing better. To reach the spot, one has to climb the staircase of the Harihareshwar temple. As mentioned, the place is at the temple area and hence it is called Shukla .....

#6 of 12 Places to Visit in Harihareshwar

Situated on the Konkan coast, Harihareshwar Beach is surrounded by four hills namely the Harihareshwar, Harshinachal, Bramhadri, and Pushpadri. It is considered the highlight of the town and is considered one of the underrated beaches in Maharashtra. There are two beaches - one to the north and the other to the south of Kalbhairav temple. Harihareshwar, along with Shrivardhan and Diveagar Beach forms a popular weekend beach destination from Pune and Mumbai.

Regarded as the must-visit Harihareshwar tourist places, the .....

#7 of 12 Places to Visit in Harihareshwar

At a distance of 12 km from Harihareshwar, 29 km from Kelshi, and 55 km from Dapoli, Velas Beach is a small secluded beach situated at Velas, a small fishing village on the western coast of Maharashtra. It is one of the untouched beaches in Ratnagiri district and among the must-visit Harihareshwar Tourist Places.

Velas is one of the most pristine beaches in the Ratnagiri district and is situated close to the Shrivardhan region. This virgin beach has white sand and an amazing sea view. This beach is famous for the Olive Ridley Turtle population that visits the beach every year to lay their eggs. Besides, nature lovers will love this beach as it is considered a small paradise and many natural green spaces can be seen along the shore of the beach. Enclosed by mountains on its three sides, this small village also has a historical connection as it was the birthplace of Nana Phadnavis, a powerful minister of the Maratha Empire.

#8 of 12 Places to Visit in Harihareshwar

At a distance of 28 km from Velas, 34 km from Dapoli, 37 km from Harihareshwar, and 91 km from Chiplun, Kelshi Beach is a secluded beach located at Kelshi village in Raigad district of Maharashtra. It is one of the less-crowded beaches on the Konkan coast, and among the must-visit tourist places in Harihareshwar.

Kelshi Beach is a beautiful beach that stretches for about 2.5 km just outside the Kelshi village across the Bharja River. Kelshi is a calm and peaceful beach and ideal for people looking for a short weekend getaway from the cities of Mumbai, and Pune. Along the coast of Kelshi are thick woods and groves of Kevda, Cyprus, Coconut, and Betelnut. There is a hill on this beach called Utambar hill, and one will find large black rocks at the meeting point of Utambar hill and the sea. A part of the beach has rocks filled with treasure troves of cowries, conches, and shells.

#9 of 12 Places to Visit in Harihareshwar

At a distance of 5 km from Velas, 10 km from Harihareshwar, and 24 km from Srivardhan, Bankot Fort is an ancient fort situated at Bankot village in Ratnagiri district of Maharashtra. Overlooking the Bankot Creek, it is one of the historical forts in Maharashtra, and among the best places to visit during Harihareshwar tour.

Also known as Himmatgad, the Bankot Fort is situated at the highest point on the junction where river Savitri meets the sea. It is believed to have been established with the motive of guarding the trade route which ran along the Savitri River. As it is located atop a small hill, the fort provides its visitors with a commanding view of the nearby settlement and the sea. It is one of the best tourist places in Harihareshwar.

The origin of Bankot Fort is unknown but .....

#10 of 12 Places to Visit in Harihareshwar

At a distance of 75 km from Lonavala, 102 km from Mumbai, 143 km from Pune, 170 km from Mahabaleshwar, and 272 km from Ganpatipule, Alibaug, or Alibag is a coastal town in the Raigad district of Maharashtra. It is one of the popular Maharashtra tourist places, and among the famous places to visit near Mumbai.

Alibaug is surrounded by sea on three sides, it is very commonly known as the 'Goa' of Maharashtra. The town was founded in the 17th century by Kanhoji Angre who was the naval chief during the reign of Shivaji Maharaj. Earlier, Alibaug was known as Kolaba, attributed to the Kolaba Fort, among the must include places in Alibaug Tour Packages. Legend has it that a wealthy Muslim named Ali owned many plantations hence the town derived its name Alibag.

Alibaug has witnessed many historic battles including the one at Varsoli between .....