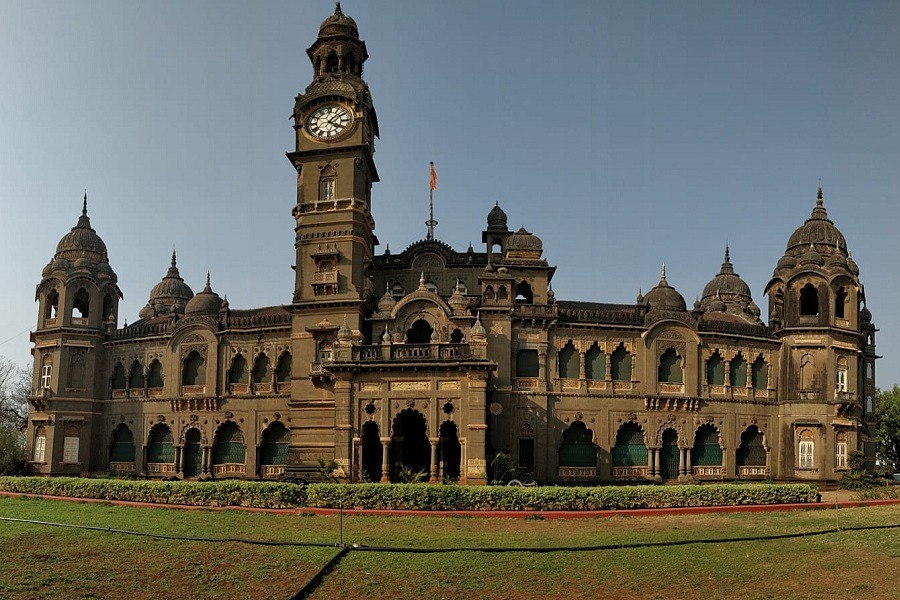 At a distance of 2.5 km from Kolhapur Railway Station, and 3 km from Sri Mahalakshmi Ambabai Temple, New Palace Museum is a heritage museum located on Kasaba Bawada Road in Kolhapur. Also known as Shri Chhatrapati Shahu Museum, it is one of the popular museums in Maharashtra, and among must-visit tourist places in Kolhapur.

The New Palace was constructed in 1877-84 and has been the residence of Chatrapati Shahu Maharaj. It is one of the most famous places to visit as part of Kolhapur packages. The beautiful palace is built in black polished stone and is a marvelous architectural feat. The whole building is eight-angled and has a tower in the middle. The principal south facade presents a double-storeyed range, with Neo-Mughal lobed arches beneath and temple-like columns and brackets above. This scheme is interrupted by trefoil arches capped with curving cornices and small domes. The same elements cap the octagonal corner towers. The central porch is marked by a pronounced curved cornice. To one side rises a 45m high clock tower capped with an octagonal domed pavilion.

The ground floor of the palace is converted into Shahaji Chhatrapati Museum in the year 1974 by Shahaji II. While the current maharaja of Kolhapur Shreemant Shahu Maharaj lives on the first floor of this palace. The museum displays a variety of paintings, photographs, statues, and ornate pieces of furniture belonging to the Kolhapur rulers. The Shahu Gallery, devoted to the personal belongings of Rajarshi Shahu, exhibits letter exchanges with viceroys and British generals, photographs relating his life and contributions to the cultural and social betterment of the city. His promotion of wrestling, hunting, and progressive strategies are reflected through the items displayed in the gallery. Intricate embroidery and beadwork created by the queens are also displayed.

The arms gallery includes an elaborate collection of weapons and ammunition. This section also focuses on the tools that were made by royal demand to control elephants during combat or training. Elephant saddles and howdahs made of silver as well as the royal palanquin and crib are exhibited. The Photo Gallery has many interesting pictures of royalty including the eye-catching photograph of Shahaji II with the hundredth hunted tiger. The gallery of stuffed animals hunted by the royal family is also popular. Stuffed Tigers, Tiger heads, Wild Dog, Sloth Bear, Wild Buffalo, Lion, Black Panther, Wild Boar, Black Buck, several other Deer varieties, and a Himalayan Black Bear can be seen here.

The Darbar Hall occupies a double-height space in the middle of the palace, and a raised throne is placed at one end. Apart from the intricate carvings on the walls, the arches of the hall are covered with stained glass paintings depicting scenes from the life of Chhatrapati Shivaji. Paintings by noteworthy artists such as Raja Ravi Verma, Chandrakanth Mandre, and Rao Bahadur Dhurandar are also popular attractions here. The Palace has extensive premises with a beautiful garden, fountain, and wrestling ground. A little beyond its premises are a lake and an open zoo, home to migratory birds, and some herbivores.