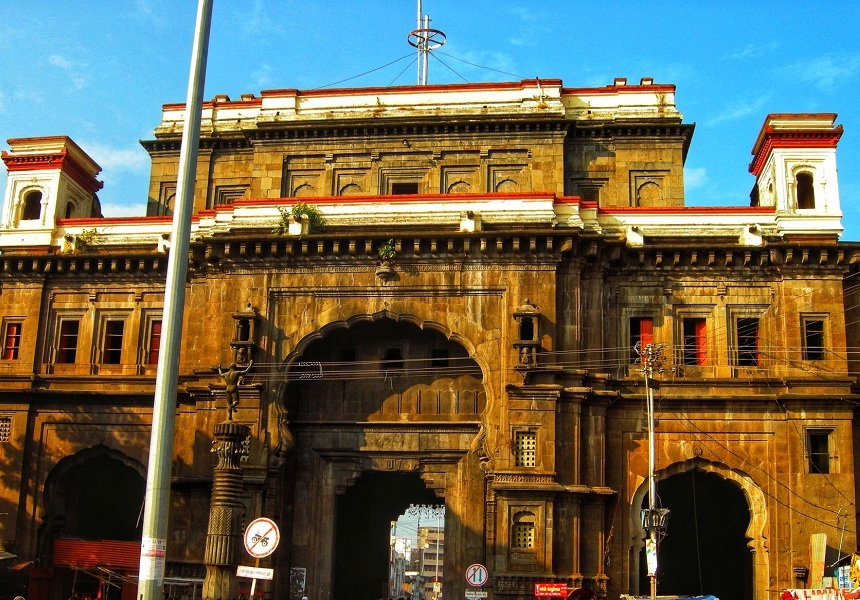 At a distance of 2.5 km from Kolhapur Railway Station, Bhavani Mandap is a historical building nestled inside the walled city of Kolhapur. Located near the famous Mahalaxmi Temple, it is one of the popular places of heritage in Maharashtra, and among the top places to visit in Kolhapur.

Bhavani Mandap is one of the biggest and oldest structures in Kolhapur. It was built during the period 1785 to 1800 by then the ruler of Kolhapur, Shivaji Maharaj II. It was constructed according to the architectural style of the British Empire with 14 squares. In about 1813, the Muslim ruler Saadat Khan invaded the palace and a part of it was burnt. After repair, 7 squares survived. Bhavani Mandap used to be the court and palace of Chhatrapati Maharaja in the yesteryears. The king conducted important meetings, litigations, and celebrations inside this building. The place also had living quarters for many of its court officials. As per history, Bhavani Mandap is the very place where Shambhu alias Abasaheb Maharaj was killed.

Bhavani Mandap has now been converted into a public monument and has a great historical significance. A life-size statue of Shahu Maharaj, the most loved king of Kolhapur is placed in the entrance hall of the Mandap. There are many interesting artifacts on display here, such as the stuffed animals like deer and panther hunted by the king. One such piece is a giant stuffed bison on which, The Mandap was divided into 14 squares, but after a major attack by the British army, 7 of them got destroyed.

At the center of the Mandap, there is the temple of Tulja Bhavani, who is considered to be the younger sister of Goddess Mahalakshmi and was invited as a guest to Kolhapur. Shri Chhatrapati built this temple for the members of his family. Many believe that the idol here is the one worshipped by Shivaji Maharaj, while others claim that the one at Tuljapur is the real idol that the great Maratha ruler worshipped. Furthermore, the site attracts tourists for its beautiful entrance hall, and various embellishments like Zumbur, a cluster of lights.