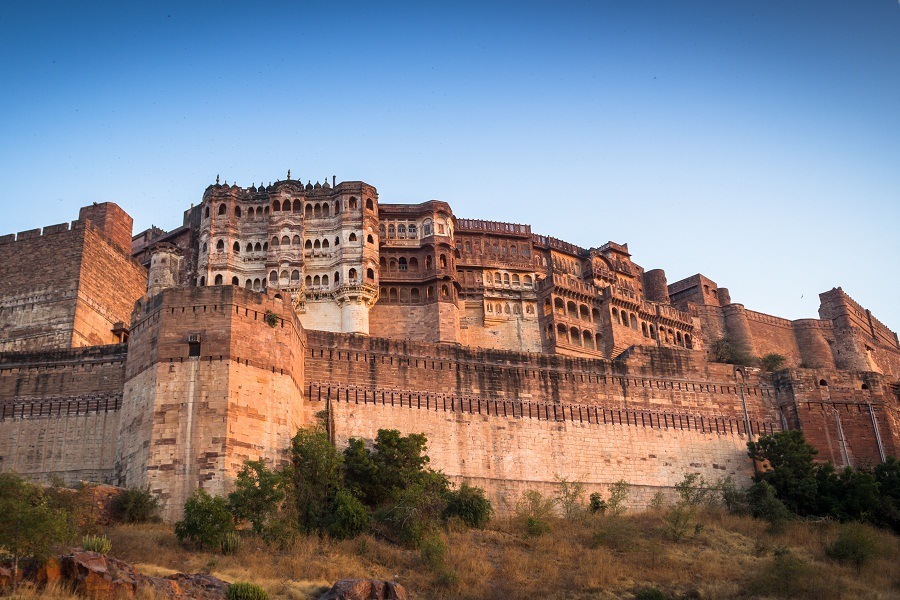 At a distance of 6 km from Jodhpur Junction, Mehrangarh Fort is an ancient hill fort situated in Jodhpur City. It is one of the renowned historical forts in Rajasthan, and among the must include places in Jodhpur sightseeing packages.

Situated at 410 feet above the city, Mehrangarh Fort was built by Rao Jodha in 1459 AD when he transferred his capital from Mandore to Jodhpur. The fort was named Mehrangarh, meaning 'Fort of the Sun'. Though the fortress was originally started in 1459 by Rao Jodha, most of the fort which stands today dates from the period of Jaswant Singh of Marwar (1638 -78). Today, this fort is preserved and owned by Maharaja Gaj Singh II - the current Rathore ruler.

According to popular folklore, it is believed that to develop the Mehrangarh Fort, the Rao Jodha displaced a hermit called Cheeria Nathji (The lord of birds), who was the hill's lone human occupant. Being angry upon this forced displacement, Cheeria Nathji cursed Rao Jodha that his kingdom will suffer from a serious scarcity of water and even today the area is plagued by a drought every 3 to 4 years. During the construction of the Fort, Rao Jodha buried a man called Raja Ram Meghwal alive in the foundations and promised him that his family will be taken good care of, in return for this sacrifice. Even today, his descendants live in the fort, in an estate named Raj Bagh.

Among the Jodhpur tourist places, the fort is enclosed by 120 feet high and 70 feet thick walls. The fort has seven gates and the most famous among them is the Jayapol (meaning victory gate). This gate was constructed by Maharaja Man Singh to celebrate his victory over the armies of Jaipur and Bikaner. Another gate - Fatehpol was raised by Maharaja Ajit Singh to commemorate the defeat of the Mughals. The imprints of cannonball hits by attacking armies of Jaipur can still be seen on the second gate. Loha Pol is the final gate into the main part of the fort complex. Immediately to the left are the handprints of the ranis who immolated themselves on the funeral pyre of their husband, Maharaja Man Singh in 1843. To the left of the fort is the chhatri of Kirat Singh Soda, a soldier who fell on the spot defending the Mehrangarh Fort.

There are several palaces inside the fort complex, which are known for their intricate carvings and sprawling courtyards. These include Moti Mahal, Phool Mahal, Sheesha Mahal, and Daulat Khana. Moti Mahal or Pearl Palace is one of the most prominent palaces of the fort that houses the royal throne of Jodhpur known as the Sringar Chowki. It was built by Raja Sur Singh (1595-1619). This palace is known for its beautifully carved architectural screens. Maharajah Abhaya Singh (1724-1749) constructed the Phool Mahal that has a ceiling rich in gold filigree. Maharaja Takht Singh built Takht Vila. It served as his residence during the time of his reign. Mirror-work of brightly painted religious figures made in plaster adorns the Sheesha Mahal.

A large part of the Mehrangarh Fort has been converted into a heritage museum, which is one of the finest museums across the country. The museum has a large collection of royal palanquins, miniature paintings, furniture, and historic armory, etc. The three-story Daulat Khana Gallery houses treasured artifacts related to Rathores. It also has the remains of Emperor Akbar. The ramparts of the fort house preserved the old cannon, and it also provides a breath-taking view of the city.