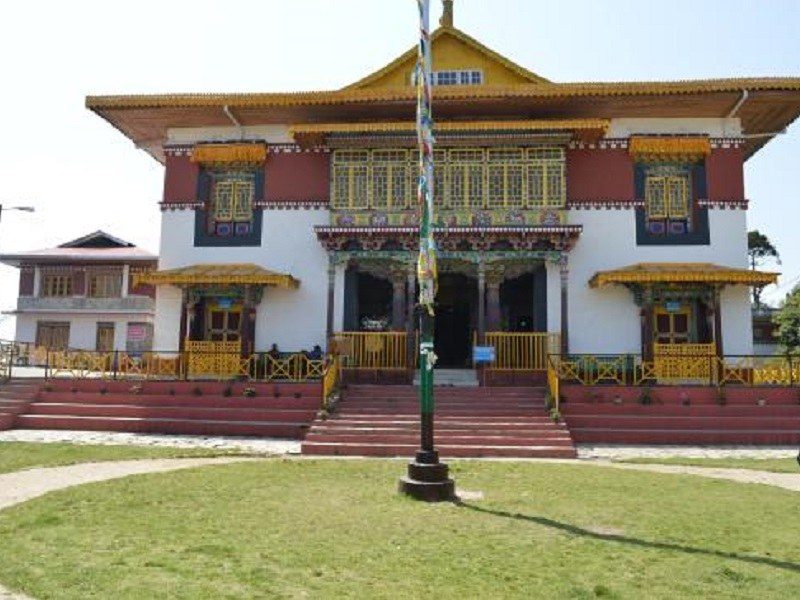 At a distance of 2 km from Upper Pelling Football Ground, Pemayangtse Monastery is a Buddhist monastery located at Pelling in the northeastern Indian state of Sikkim. Also known as Pelling Monastery, it is one of the oldest monasteries in Sikkim and among the most famous places to visit in Pelling.

Situated at an altitude of 2100 m, Pemayangtse Monastery was founded by Lama Lhatsun Chempo in 1705 CE. Initially the monastery was built very small in size and was enlarged during the reign of the third Chogyal Chakdor Namgyal who was considered as Lhatsun Chempo's third reincarnate, Jigme Pawo. The monastery follows the Nyingma Order of Tibetan Buddhism and controls all other monasteries of that Order in Sikkim.The monks of this monastery are normally chosen from the Bhutias of Sikkim.

The word Pemayangtse means 'perfect sublime lotus' and it is believed to symbolize one of the four plexus of the human body. The monastery was built for 'pure monks' (ta-tshang) meaning 'monks of pure Tibetan lineage', celibate and without any physical abnormality. This practice is still retained. Only the monks of Pemayangtse Monastery are entitled to the title 'ta-tshang'. The head lama of this monastery had the unique privilege of anointing the Chogyals of the erstwhile monarchy of Sikkim with holy water.

Perched on a hilltop overlooking the Rabdentse Ruins, the monastery is a three-storied structure built in Tibetan architectural style. The monastery houses much famous collection of Buddhist idols, scriptures and sculptures. The ground floor features a central Buddha, while upstairs have fierce-looking statues depict all eight reincarnations of Padmasambhava. The main highlight is an astounding seven-tiered model representing Padmasambhava's heavenly abode of Zangtok Palri, which was made by Late Dungzin Rinpoche. There is also a well maintained garden adjacent to the monastery.

Despite being over 300 years old, the monastery is in excellent condition and is well maintained by the monks. Mount Khangchendzonga can be seen clearly from this monastery. The best time to visit the monastery is during the Chaam dance festival, celebrated on the 28th and 29th day of the 12th month of Tibetan lunar calendar, corresponding to February of the Gregorian calendar. The lamas are dressed in beautiful costumes posing as Mahakala and Guru Drag-dmar.