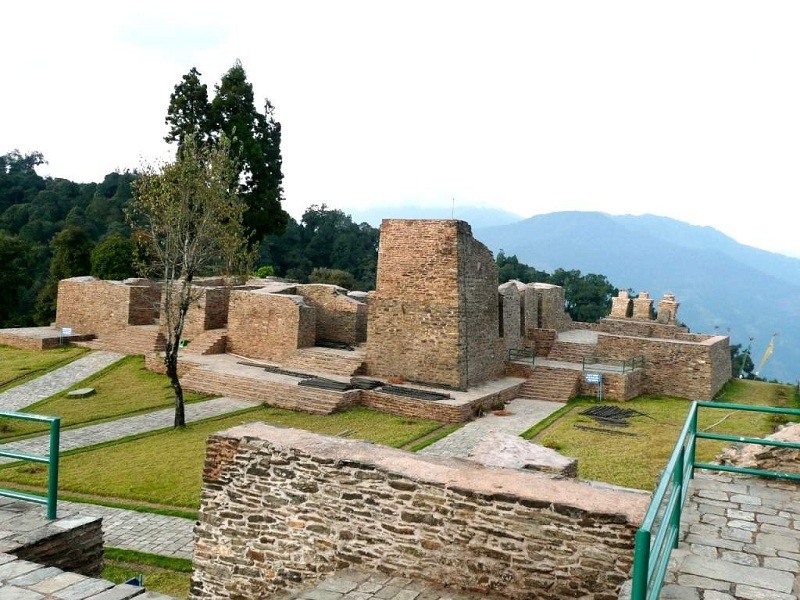 At a distance of 2 km from Upper Pelling- Football Ground, Rabdentse is an archeological site situated near Pemayangtse Monastery in Pelling. It is one of the best historical places in Sikkim and among the must visit Pelling Tourist Places.

Founded by the 2nd Chogyal of Sikkim Tensung Namgyal in the year 1670 AD, Rabdentse was the second capital of the former kingdom of Sikkim from 1670 to 1793 CE, the first one being Yuksom. This is the place where Tensung Namgyal married three wives, first from Tibet, second from Bhutan and Yo Hang of Limbuwana eastern Nepal. Later, the city was almost completely destroyed by the Nepalese Army in the 18th century and only the ruins of the palace and the chortens are seen here now. Today, Rabdentse has been declared a monument of national importance by Archaeological Survey of India and undertaking the restoration works.

Surrounded by dense forest, the place is a must see for the history enthusiasts. The ruins of Rabdentse Palace are just 1 km walk away from the Pemayangtse Monastery through the dense forest on the way to Pelling. On walking through the chestnut trees, one can come across a stone throne with three standing stones known as Namphogang from where the judge used to give his final judgment in those days. One can also see Taphap Chorten, the entry point to the Palace from where the visitors had to take off their hats to enter the palace. The palace ruins are at the center of the fourth courtyard. Adjacent to the place is 'Dab Lhagang' where the royal family used to offer incense to the deities.

The Rabdentse Ruins are part of Buddhist religious pilgrimage circuit starting with the first monastery at Yuksom known as the Dubdi Monastery, followed by Norbugang Chorten, Tashiding Monastery, the Pemayangtse Monastery, the Sanga Choeling Monastery, and the Khecheopalri Lake. The view of the entire valley below and Kanchenjunga peak from the ruins is absolutely spectacular and should not be missed.