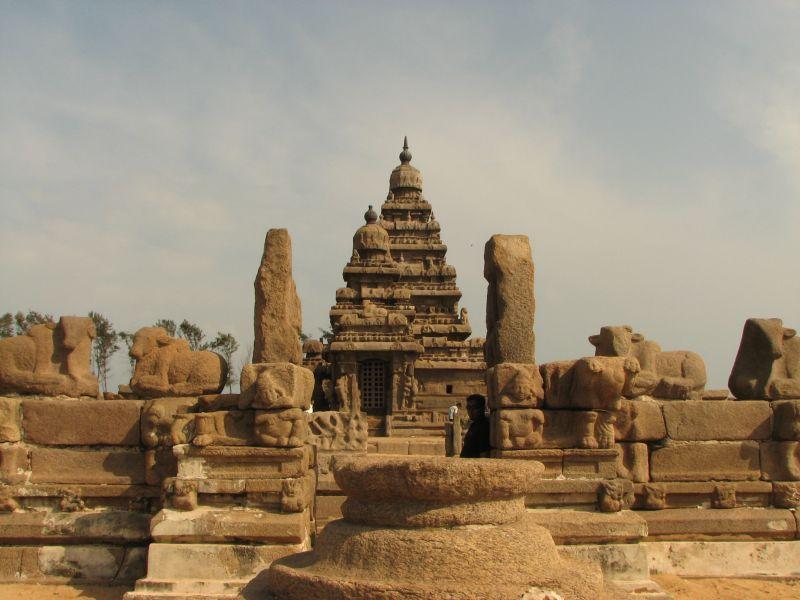 At a distance of 57 km from Chennai, 65 km from Kanchipuram, 96 km from Pondicherry, 420 km from Madurai and 290 km from Trichy, Mahabalipuram (also called Mamallapuram) is situated in Kanchipuram district in the state of Tamil Nadu. It is famous for its shore temples built in 7th century. Mahabalipuram is one of the must visit weekend getaways from Chennai for one day trip. This also a major historical / heritage site in Tamil Nadu and one of the best places to experience Tamilnadu Tourism. Mahabalipuram is one of the best places to include in your Pondicherry tour packages.

This UNESCO World Heritage Site was the second capital of the Pallava kings of Kanchipuram. It is an ancient historic town and was a bustling seaport during Pallava kings in 7th Century AD. According to the legend, it has been named after the demon king Mahabali who was renowned for his generosity. Some maintain that it has been named Mamallapuram after the Pallava King Narasimha Varman I, a great wrestler with the title Mamallan.

It is known for its historical monuments, sculptures, scenic beauty, culture and tradition. Mahabalipuram art can be divided into four categories: open air bas-relief, structured temples, man-made caves and rathas (chariot temples). The famous Arjuna's Penance and the Krishna Mandapa adorn massive rocks near the centre of the village. The beautiful Shore Temple towers over the waves, behind a protective breakwater. Sixteen man-made caves in different stages of completion are also seen, scattered through the area. The striking feature is that all the sculptures here are monolithic - giant structures carved from single rocks.

The temples of Mamallapuram, built largely during the reigns of Narasimha Varman and his successor Rajasimha Varman, showcase the movement from rock-cut architecture to structural buildings. The mandapas and the rathas shaped as temple chariots are made from the granite rock face, while the famed Shore Temple, erected half a century later, is built as a structured temple with huge blocks of rocks following wonderful architecture. Thirukadalmallai temple, Cholamadal Artist's Village, Mahabalipuram Beach, Tiger Cave and Crocodile Bank serve as popular picnic spots for people here.

One of the prominent festivals celebrated here is the Mamallapuram Dance Festival, which is organized by the Department of Tourism every year during December - January. As part of the festival, various dance forms are showcased including Bharatanatyam, Kuchipudi, Kathakali and Odissi.

The nearest airport to Mahabalipuram is in Chennai, located about 50 km away. The nearest railhead is in Chengalpattu, close to 30 km from Mahabalipuram. It has trains from Chennai, Pondicherry, Kanyakumari, Mumbai, Trivandrum, Kanchi, Tirupati, Ernakulum, Villupuram, Rameshwaram and Jodhpur. Buses arrive here from either Koyembedu (CMBT) or Tiruvanmiyur (in Chennai) and Kanchipuram and Pondicherry.

How to Reach Mahabalipuram - Full Details

Top 10 Places to Visit in Mahabalipuram

#1 of 19 Places to Visit in Mahabalipuram

At a distance of 2 Kms from Mahabalipuram Bus Station, The Shore Temple (700-728 CE) is so named because it over looks the Bay of Bengal. It has been classified as a UNESCO World Heritage Site as part of 'Group of Monuments at Mahabalipuram'.

Mahabalipuram Shore Temple is a structural temple, built with blocks of granite, dating from the 8th century AD. The site is famous for the rock-cut caves and the sculptured rock that line a granite hill. The temple was built by Pallavas during the reign of Narasimhavarman.

The Shore Temple is a five-storeyed structural Hindu temple rather than rock-cut as are the other monuments at the site. It is the earliest important structural temple in Southern India. Its pyramidal structure is 60 ft high and sits on a 50 ft square platform. There is a small temple in front which was the original porch. It is made out of finely cut local granite.

#2 of 19 Places to Visit in Mahabalipuram

At a distance of 0.5 Km from Mahabalipuram Bus Station (on Mada Koil Street), Arjuna's Penance or Bhagiratha's Penace is the name of a massive open air bas-relief monolith dating from the 7th century CE. Measuring 96 feet long by 43 feet high, the bas-relief is also known as The Descent of Ganga. It has been classified as a UNESCO World Heritage Site as part of 'Group of Monuments at Mahabalipuram'.

In one interpretation, a figure in the bas-relief who is standing on one leg is said to be Arjuna performing an austerity Tapas to receive a boon from Shiva as an aid in fighting the Mahabharata war.

The bas relief is situated on a rock with a cleft. Figures within the cleft are said to represent the River Ganges and Shiva. This provides the basis for an alternative interpretation, rather than Arjuna, the figure performing austerities is said to be Bhagiratha.

#3 of 19 Places to Visit in Mahabalipuram

At a distance of 0.5 Kms around Mahabalipuram Bus Station, there are 14 rock-cut carves and Mandapams in and around Mamallapuram. Mythological scenes are depicted on these architectures. These caves have been classified as a UNESCO World Heritage Site as part of 'Group of Monuments at Mahabalipuram'.

1) Krishna Mandapam - This is the biggest among the Mandapams and is dedicated to Lord Krishna. The sculptures inside this Mandapam beautifully picturize the myth of Lord Krishna during his brave and energetic adulthood.

2) Mahishasuramardhini Mandapam - The battle between goddess Durga and the buffalo headed demon, Mahishasura is beautifully inscribed.

3) Varaha Mandapam - the side walls have large sculptured panels depicting Vishnu as Varaha, the boar, holding up Bhudevi, the earth goddess.

#4 of 19 Places to Visit in Mahabalipuram

At a distance of 1.5 Kms from Mahabalipuram Bus Station, Pancha Rathas (Five Chariots) - five monolithic pyramidal structures named after the Pandavas (Arjuna, Bhima, Yudhishtra, Nakula and Sahadeva) and Draupadi. It has been classified as a UNESCO World Heritage Site as part of 'Group of Monuments at Mahabalipuram'.

An interesting aspect of the rathas is that, despite their sizes they are not assembled - each of these is carved from one single large piece of stone.

The Pancha Rathas shrines were carved during the reign of King Mahendravarman I and his son Narasimhavarman I. Each temple is a monolith, carved whole from a rock outcropping of pink granite.

#5 of 19 Places to Visit in Mahabalipuram

At a distance of 2 Kms from Mahabalipuram Bus Station (near The Shore Temple), the golden sandy Mamallapuram Beach is a picturesque place bounded by the shimmering sea and rolling hills. Identified as the most pristine beaches of Tamil Nadu, the beach attracts thousands of tourists throughout the year. This is another popular attraction in Mahabalipuram to visit as part of Chennai tour packages.

On request, the local fisher folk can arrange sea cruises in the country crafts. Angling can also be done with the help of the fishermen. The deep-sea angling is also famous here. There is a wide choice of resorts along the beach. Fisherman's Cove, a private beach resort offers water sports apart from its magnificent beach area. Some resorts are also having beachfront restaurants.

Sunrise and sun set watching cruises are another attraction. The sea is rough and swimming is not .....

#6 of 19 Places to Visit in Mahabalipuram

At a distance of 0.5 Km from Mahabalipuram Bus Station (on Mada Koil Street), Krishna's Butter Ball is a huge boulder near the Ganesha Ratha. It rests precariously on a narrow rock base. Legend has it that several Pallava Kings attempted to move it, but all the kings and their elephants could not shift the boulder even by an inch.

#7 of 19 Places to Visit in Mahabalipuram

At a distance of nearly 0.5 Km from Mahabalipuram Bus Station, Ganesh Ratha Temple is located towards the north of the Arjuna's Penance. It is a temple carved out from a rock to resemble a chariot and is built in Dravidian style of temple architecture. It was once dedicated to Lord Shiva. But when the original lingam was removed, the temple came to be known as the temple of Lord Ganesh.

It has been classified as a UNESCO World Heritage Site as part of 'Group of Monuments at Mahabalipuram'.

#8 of 19 Places to Visit in Mahabalipuram

At a distance of 1 Km from Mahabalipuram Bus Station (situated in East Raja Street), the Sculpture Museum is famous for its elaborate collection of sculptures and images of god and goddesses of Hindu mythology. There are more than 3,000 sculptures can be found in this museum. All the sculptures bear the historic significance and the tales of the by-gone days. In the display of the museum there are sculptures made of wood, metal, brass and cement. There are creations of ancient artists to the contemporary ones.

Not only Hindu mythology but the Buddhists sculptures and images too, exist in the temple town. The monolithic statues, the Rathas (chariots), sculptured relief and their miniature can be seen in the museum.

#9 of 19 Places to Visit in Mahabalipuram

At a distance of 5 Kms from Mahabalipuram (on Chennai - Mahabalipuram Road), Tiger Caves are situated in a coastal village on the Kovalam Road.

This is a magnificent mandapa which contains a shrine dedicated to goddess Durga which has big beautiful figures in front. The deposition here is on the battle of Goddess Durga and Mahishasura. There are number of charges in this Mandapam from that of the Mahishasura Mardini Mandapam. The figure of somaskanda is found in Athiranachanda Mandapa to the south of Tiger care.

#10 of 19 Places to Visit in Mahabalipuram

At a distance of 13 kms from Mahabalipuram (towards South) and 68 Kms from Chennai, Sadras is an outstanding beach resort that takes advantage of the beautiful landscape. This is one of the popular tourist places to visit around Chennai.

The beaches that surround Mahabalipuram are encompassed by beautiful, green casuarinas groves. The contrast of the vibrant green with the sparkling white beaches is breathtaking, and a sight that numerous tourists want to experience.

There is an old ruined Dutch Fort and a Dutch cemetery with finely carved headstones at Sadras as well.