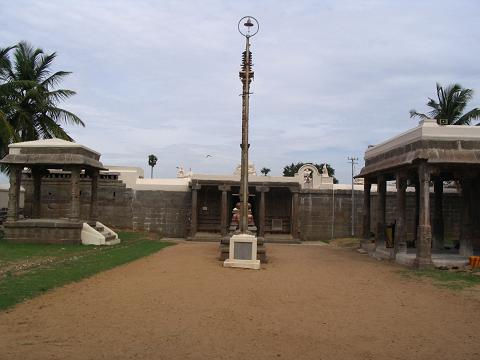 #14 of 19 Places to Visit in Mahabalipuram

At a distance of 16 kms from Mahabalipuram, this holy shrine is one among the 100 temples called Tirupathy.

Lord Narayana came here as a Brahmachaari, answering the prayers of Kalava Rishi and married 360 young daughters of the Rishi in one year. On the last day, he is said to have merged them into one and given darshan with Goddess on his left. Having married one girl a day here at this temple, the Lord is called 'Nithya Kalyana Perumal'.

At this temple, one finds the Lord in a unique standing posture facing East. While one leg is on the ground, the other is on Adhisheshan and his wife. And he is seen balancing Goddess Agila Valli on his left thigh. This place is called Thiru- Idanthai (Thiru-Goddess, Idanthai-left side), which in course of time became ThiruVidanthai.