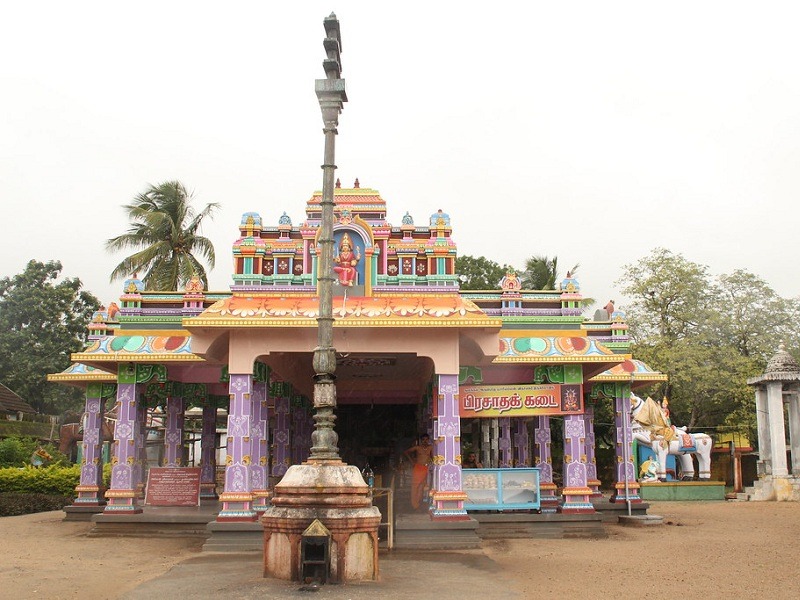 At a distance of 13 km from Pollachi Junction, Sri Mariamman Temple is a Hindu temple situated at Sulakkal village near Pollachi in Tamil Nadu. It is one of the sacred temples in Pollachi and among the must-visit places as part of Pollachi Tour Packages.

Dedicated Goddess Ambika, this 400 years old temple is one of the most important Mariamman temples in Kongunadu. The deity is a Swayambu Murthy. There is a scar on the idol caused by the hoof of a cow. As per the mythology, the cows of a nearby village called Velayudhampalayam used to graze in this area. The villagers observed that the amount of milk given by the cows was progressively coming down as the cows. So the farmers decided to find out the reason behind it and came to know that the cows were pouring their milk at a specific place. When they drove away from the cows, the leg of one of the cows was caught in a bush and when the cow took his leg off it, suddenly the swayambu appeared from the little flawed which had happened because of the cow. The Ambal came in the dream of the cow's owner and directed him to erect a temple for her. Then the temple was built.

The goddess is also called Vadukku Vayil Selvi as she faces North (Vadukku means North in Tamil). In the sanctum sanctorum, the presiding deity's idol is in sitting posture with four hands, holding Udukkai and sword in the right hands and trident and skull in the left hands. hough there is a separate Utsava Murthy, all the abhishekams are done only to the main idol. There is a Sulam ( trident ) near the Swayambumurthy due to which, this place came to be held Sulakkal.

Devotees in large numbers come to visit this temple for the blessing of Mother Sulakkai as she is famous for her grace to cure the vision problems of her devotees. Praying for total cure of their eyes devotees stay in the temple for the whole day and apply the abishek theertha on their eyes. Similarly, people without children tie cradles in the temple tree ( Mavilangai ) and it is believed that this has benefited a large number of devotees.

The most important festival celebrated at the temple is the Chithirai festival in ( May). The festival starts on the last Tuesday of Chithirai month and lasts about fifteen days. Puravipalayam Zameen members were gifted chariot to Mariamman temple. On Tuesdays and Fridays, special poojas are performed at this temple.

2 Must Visit Places in Pollachi