#4 of 8 Places to Visit in Bhadrachalam

At a distance of 2 km from Bhadrachalam Bus Station, Sri Sita Rama Temple is a magnificent temple situated close to the banks of River Godavari. Bhadrachalam is a major pilgrim town in Telangana. Parnasala, near Bhadrachalam is believed to be the place where Lord Rama along with Sita and Lakshmana stayed during their 14-year exile in forests. Ravana abducted Sita at this place in the absence of Rama and Lakshmana.

This temple was built by Kancherla Gopanna popularly known as Bhakta Ramadasu in the year of 1630 AD. Gopanna was the Tahsildar of Bhadrachalam and constructed the temple using public donations. But the Golconda Sultans were misled and felt that Gopanna had misused the government funds to build the temple. He was imprisoned in a dungeon at Golconda Fort. Lord Rama is said to have miraculously appeared before the Sultan and paid the money spent by Gopanna, after which he was released. Kabirdas, the famous Muslim saint and poet, was also closely associated with this temple.

According to legend, once sage Bhadra performed penance to Lord Rama on the banks of river Godavari in Dandakaranya to grant him divyadarshan. Sage Bhadra requested Rama to be seated on his head but Rama who was in search of his consort Sita gave promise to his Bhakta that his desire would be fulfilled on his way back after finding Sita. As Rama could not fulfill his promise during His present incarnation, sage Bhadra continued his penance more vigorously. Lord Rama remembering his promise appeared before Sage Bhadra and settled on the mountain as Vaikunta Rama.

The temple dedicated to Lord Rama & Devi is built in Dravidian style. About 50 steep lead to the temple from the impressive main gopura. On the top of gopura one can see Sudarshan Chakra, the weapon of Lord Vishnu. At the main entrance there is a small sanctum dedicated to Anjaneya. The temple complex also houses a small museum where the jewellery made by Bhakta Ramadas for Lord Rama was kept for visitors.

The Ushnagundam (Hot Pool) is located at a short distance from the Temple.

The temple's main festivals are 10-day Vaikunta Ekadashi (Dec/Jan), Sri Rama Navami (Mar/Apr) and Kartika Poornima. During these days, the town attracts lakhs of devotees. On Vaikunta Ekadashi day, the colorful Teppotsavam (boat festival) is a special attraction. In the evening, Lord Rama and Sita idols kept on a decorated swan boat and sailed through river Godavari. Spectacular fireworks are the main attraction during this festival. Bhadrachalam has good accommodation facilities provided by several hotels spread across the town.

Boating in Godavari River is a wonderful experience. Also, boating is arranged between Bhadrachalam to Papikondalu / Rajahmundry in post monsoon season (Nov - Jan).

2 Must Visit Places in Bhadrachalam 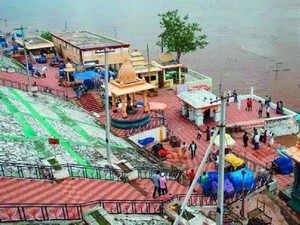 Places to Visit in Bhadrachalam