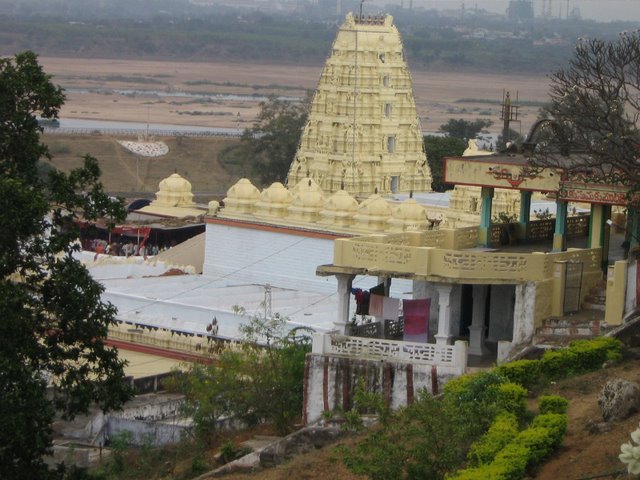 At a distance of 39 km from Kothagudem, 115 km from Khammam, 178 km from Rajahmundry, 182 km from Vijayawada, 352 km from Vizag and 312 km from Hyderabad, Bhadrachalam is a pilgrimage town in Khammam district of Telangana State, situated on the banks of the River Godavari. Bhadrachalam is renowned for the famous Sri Rama Temple built in 17th century and is one of the best tourist places near Hyderabad.

The temple for Lord Rama was built by a devotee called Kancherla Gopanna popularly known as Bhakta Ramadasu in the 17th century. Gopanna was the Tasildar of Bhadrachalam and constructed the temple using public donations. But the Golconda Sultans were misled and felt that Gopanna had misused the government funds to build the temple. He was imprisoned in a dungeon at Golconda Fort. Lord Rama is said to have miraculously appeared before the Sultan and paid the money spent by Gopanna, after which he was released. Gopanna then became Bhadrachala Ramadasu and went on composing several songs in Telugu in praise of Rama. Kabirdas, the famous Muslim saint and poet, was also closely associated with this temple. This is another popular attraction to visit as part of Hyderabad tour packages.

This holy town with beautiful landscapes provided by River Godavari attracts several devotees throughout the year from different parts of Telangana and AP states. This holy river houses most of the sacred shrines of the town in and around its banks. The Ushnagundam (Hot Pool) or Gundala is located at a short distance from the Temple. Parnasala, 35 km north of Bhadrachalam, is believed to mark the hermitage where the demon Ravana abducted Sita. Tourists can engage in activities such as boating, trekking and a trip to Papikondalu.

The 10-day Vaikunta Ekadashi (Dec/Jan), Sri Rama Navami (Mar/Apr) and Kartika Poornima are the important festivals celebrated at Bhadrachalam temple. During these days, the town attracts lakhs of devotees. On Vaikunta Ekadashi day, the colorful Teppotsavam (boat festival) is a special attraction. In the evening, Lord Rama and Sita idols kept on a decorated swan boat and sailed through river Godavari. Spectacular fireworks are the main attraction during this festival. Bhadrachalam has good accommodation facilities provided by several hotels spread across the town.

The best season to visit Bhadrachalam is from October to March while the Peak Season is from March to April. It usually takes one full day to visit all the places in Bhadrachalam.

How to Reach Bhadrachalam - Full Details

Top 10 Places to Visit in Bhadrachalam

#1 of 8 Places to Visit in Bhadrachalam

At a distance of 2 km from Bhadrachalam Bus Station, Sri Sita Rama Temple is a magnificent temple situated close to the banks of River Godavari. Bhadrachalam is a major pilgrim town in Telangana. Parnasala, near Bhadrachalam is believed to be the place where Lord Rama along with Sita and Lakshmana stayed during their 14-year exile in forests. Ravana abducted Sita at this place in the absence of Rama and Lakshmana.

This temple was built by Kancherla Gopanna popularly known as Bhakta Ramadasu in the year of 1630 AD. Gopanna was the Tahsildar of Bhadrachalam and constructed the temple using public donations. But the Golconda Sultans were misled and felt that Gopanna had misused the government funds to build the temple. He was imprisoned in a dungeon at Golconda Fort. Lord Rama is said to have miraculously appeared before the Sultan and paid the money spent by Gopanna, after which he was released. Kabirdas, the famous Muslim saint and poet, was .....

#2 of 8 Places to Visit in Bhadrachalam

Godavari Ghat is one of the most important religious sites in Bhadrachalam and is considered as the main ghat. Many pilgrims consider it mandatory to take a ritual dip in the Godavari before paying a visit to Lord Rama in the temple as it is believed to be purifying for the soul. Bhadrachalam is one among the popular places where the Godavari river festival is set to be celebrated on a grand scale. The Ghat has well built in steps and changing rooms.

Boating is also available here. The boulevard that runs along the river has pictorial depictions of stories and scenes from the Ramayana.

#3 of 8 Places to Visit in Bhadrachalam

At a distance of 30 km from Eturnagaram, 89 km from Ramappa Temple, 120 km from Bhadrachalam, and 140 km from Warangal, Bogatha Waterfall is a nice waterfall situated near Chikupally village in Wajedu Mandal in Khammam district of Telangana. Also known as Chikupally Falls, this is one of the popular tourist places to visit near Hyderabad, and among the best waterfalls in Telangana.

Situated in a forest region between Kaleswaram and Bhadrachalam, Bogatha Falls is formed on Chikupally Vagu that merges with River Godavari. Situated amidst thick vegetation, Bogatha Falls is a favorite picnic spot for the residents of nearby villages. Dropping from a height of over 30 feet in several parallel streams, the water is collected into a large pool at the bottom of the falls. Swimming in the pool is a favorite activity here and swimming here is considered safe.

To reach the falls from Eturnagaram, drive past Godavari Bridge and reach Chikupally village which is 11 km from New Godavari .....

#4 of 8 Places to Visit in Bhadrachalam

At a distance of 11 km from Palvoncha, 40 km from Bhadrachalam, 102 km from Khammam and 297 km from Hyderabad, Kinnerasani Dam is located at Yanambile in Khammam district of Telangana. The dam is situated inside Kinnerasani Wildlife Sanctuary.

The Kinnerasani Dam was constructed in 1966 on the Kinnerasani River, one of the important tributaries of Godavari River. The dam provides water to Kothagudem Thermal Power Station at Palvoncha for power generation. It also provides irrigation facilities to the nearby farmers through lift Irrigation.

Kinnerasani Dam is situated in a beautiful location surrounded by greenery and natural landscape. A Glass House constructed by Singareni Collieries at Kinnerasani has improved the spot as a tourism place. A deer park housing little over 80 spotted deer nearby the scenic Kinnerasani dam site is the major attraction for tourists. The vast Kinnerasani reservoir harbors number of crocodiles .....

#5 of 8 Places to Visit in Bhadrachalam

#6 of 8 Places to Visit in Bhadrachalam

At a distance of 2 Kms from Bhadrachalam Bus Station, Sri Abhaya Anjaneya temple is dedicated to Lord Hanuman and is situated in Seethammadhara.

This temple was constructed in the year 1998 by a devotee of Lord Hanuman who manages the temple. The temple has excellent carvings of several deities in its premises. The beautiful sculptures of gods and goddesses carved along the border of the temple complex are very attractive. This temple attracts thousands of devotees on Tuesdays.

#7 of 8 Places to Visit in Bhadrachalam

At a distance of 35 km from Bhadrachalam, Parnasala is a pilgrimage place situated at Parnasala village in the newly formed Bhadradri Kothagudem district (formerly in Khammam district) of Telangana, India. It is one of the several Hindu temples connected with Epic Ramayana, and among the must-include places in Bhadrachalam tour packages.

Parnasala holds a significant value in mythology. According to legend, Lord Sri Rama spent some of the 14 years of exile at this location. Parnasala is said to be the place where the evil-minded demon king Ravan abducted Goddess Sita. Another story states that this historical village is the place where Maricha was killed by Lord Shri Ram when he came in disguise as a golden deer to deceive Goddess Sita.

A small hut in Parnasala consists of the beautifully painted sculptures of Lord Rama, Sita, and Lakshman. Here, one can see Seethavagu, where the beloved consort of Rama bathed, and Naracheeralu, where goddess Sitha dried her clothes on 'Radhagutta'. .....

#8 of 8 Places to Visit in Bhadrachalam

At a distance of 85 km from Rajahmundry, 112 km from Kakinada, 118 km from Bhadrachalam, 233 km from Khammam, 241 km from Vizag, 245 km from Vijayawada and 432 km from Hyderabad, Maredumilli is a village situated on Bhadrachalam - Rajahmundry highway in East Godavari district of Andhra Pradesh. Amidst the semi evergreen forests, it is one of the top places to visit near Rajahmundry and among the best places to visit in Andhra Pradesh. Maredumilli is one of the top attractions you must include in Vizag tour packages.

Located in the dense forests of Eastern Ghats, this quaint little village has been developed by the Forest Department as an Eco-tourism Centre. Maredumilli is a place of wildlife, nature and of tribal people. This forest area is conserved and developed by the tribals who have habituated the lands for generations. The entire region is amazing and picturesque with green grasslands encircled by hills with many streams flowing .....