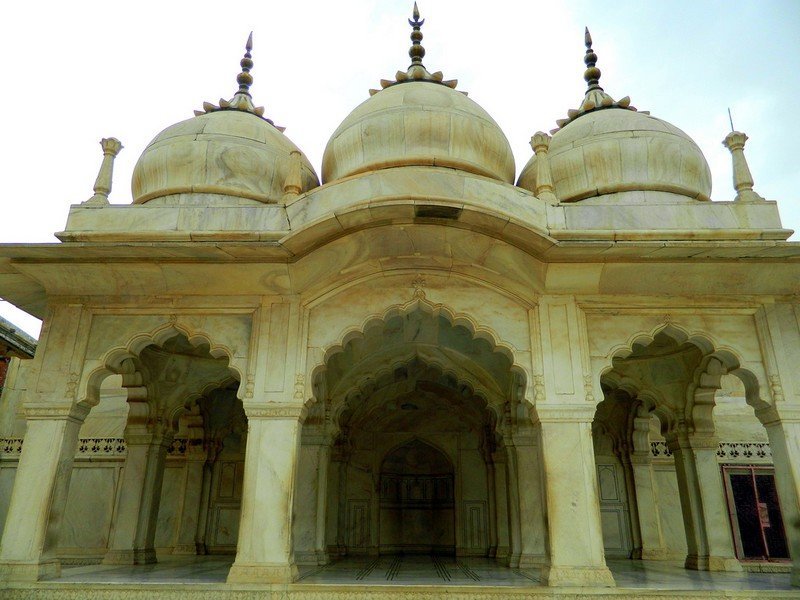 At a distance of 4.5 km from Agra Cantonment Railway Station and 2.5 km from Taj Mahal, Nagina Masjid is located beside the Diwan-i-Am inside the Agra Fort. It is also known as the Gem Mosque or Jewel Mosque.

The Nagina Masjid was built during1631-40 by Shah Jahan for the ladies of the Royal family. This private mosque is constructed with pure white marble. The Masjid bears a very simple architecture and a descent decoration. This private mosque has special features of three majestic domes and wonderful arches.

Nagina Masjid is enclosed by walls of three sides with a special a prayer chamber at the west. The mihrab pointing the direction of Holy Kabah is situated on the western wall of the prayer chamber. The prayer chamber is also made up of marble and has three domes on its top. The mosque has a three-arched facade with the cusps and supported on slender piers as its entrance. The arch in the middle is larger and has nine cusps and ones on the either sides have seven cusps only.

A luxurious bazaar, known as Mina Bazar, was functioning down the road from where royal ladies could purchase items standing in the balcony of Nagina Masjid.