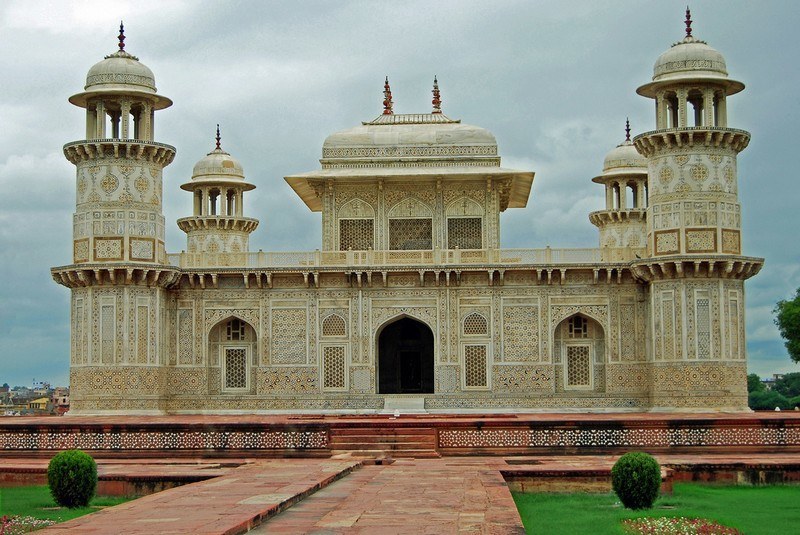 At a distance of 8 km from Agra Cantonment Railway Station and 3 km from Agra Fort, Tomb of Itimad-ud-Daulah is a Mughal mausoleum located on the western bank of the Yamuna River near the Yamuna Bridge Railway Station in Agra. The tomb is also known as the Jewel Box or Baby Taj as it looks like a smaller version of the Taj Mahal. It is one of the popular Agra tourist places and also one of the top attractions you must include in Agra packages. It is believed that this tomb was the inspiration behind the construction of the Taj Mahal.

Itimad-ud-Daulah is the first monument in India built entirely with marble. The tomb was built between 1622 and 1628 by the Queen of Jahangir, Nur Jahan as a memorial to her father, Mirza Ghiyas. Mirza Ghiyas was an imperial officer and bestowed with the title of Itmad-ud-Daulah (Pillar of State) by Emperor Jahangir.

The Tomb of Itimad-ud-Daulah is one of the best examples of the perfect blend of Mughal and local architecture. The tomb is primarily built in white marble with mosaic and lattice. The tomb stands 21 m high and features 12 m tall dome-roofed octagonal minaret at each corner. Instead of a dome, the tomb has a small rooftop canopy. Situated in the middle of the Charbagh style gardens and is famous for its extravagant inlay work. The main chamber of the tomb is adorned with mosaics and semi-precious stones that are inlaid in white marble. This marble was encrusted with semi-precious stone decorations.

The tomb complex consists of a central hall, which houses the tomb of Mirza Ghiyas Beg and his wife Asmat Begum. A sandstone staircase leads to the first floor, where elegant oblong dome is found surmounting a pavilion over the central hall, topped with pinnacles. The cenotaphs and walls of the ground floor contain inscription in Persian. The wall inscriptions are from Quran and other holy texts, while the cenotaph inscriptions are stating the name and title of those interned.