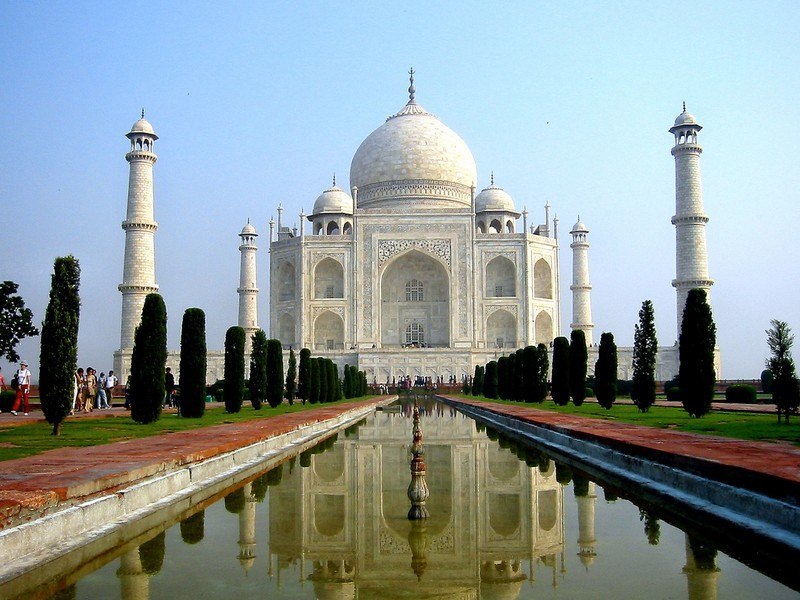 At a distance of 6 km from Agra Cantonment Railway Station, Taj Mahal, one of the most popular tourist destinations in the world, is located on the southern bank of the Yamuna River in Agra of Uttar Pradesh State. Taj Mahal was declared as a World Heritage Site by UNESCO in 1983 and it is also counted among the seven wonders of the modern world. It attracts around four million visitors annually. Taj Mahal is the face of Agra Tourism and among the must include place in your Golden Triangle tour packages.

Taj Mahal was commissioned in 1632 by the Mughal emperor Shah Jahan (reigned 1628-1658), in the memory of his favorite wife Mumtaz Mahal. The construction of the monument was completed in 1653. The Taj Mahal was constructed under the supervision of architects Abdul-Karim Ma'mur Khan, Makramat Khan and Ustad Ahmad Lahauri. It took 21 years for the Taj Mahal to be constructed with over 20,000 workers.

Taj Mahal is one of the most admired Mughal masterpieces in the world and it represents the Indian, Persian and Islamic styles of architecture. It is an integrated complex of structures that include a white marble mausoleum containing the tombs of Shah Jahan and his wife Mumtaz Mahal. The mausoleum is built entirely of white marble, set on a high plinth which includes four tall minarets. The interior chamber of the Taj Mahal is an octagon, which is decorated in lapidary work of precious and semiprecious gemstones. The cenotaph of Mumtaz Mahal is placed in the center of the inner chamber and the cenotaph of Shah Jahan lies west of Mumtaz Mahal. Both the base and casket of the cenotaph are decorated with precious and semiprecious gems.

The most striking feature of this tomb is the marble dome, which is often called an onion dome. Decorated with a lotus design, the top of this tomb features a gilded finial, which is topped by a moon. The finial reflects a mix of traditional Persian and Hindu decorative elements. The exteriors of the Taj Mahal are decorated by paint, stucco, stone carvings.

The complex of Taj Mahal has a 300 sq. m wide garden, which is also known as Charbagh or Mughal Garden. The complex is bounded on three sides by red sandstone walls. The entrance to the complex is through a grand ornamental gateway known as Darwaza-i-Rauza, inscribed with Quranic inscriptions and the calligraphed line 'O Soul, thou art at rest. Return to the Lord at peace with Him, and He at peace with you.' Mausoleums of the other wives of Shah Jahan and tomb of Mumtaz's favorite servant are located outside the Taj Mahal complex. A Mosque and a guest house situated at the far end of the complex.

Taj Mahal is open for night viewing on the day of the full moon and two days before and after that. To protect the beauty of the monument, no petrol or diesel vehicle is allowed in the Taj area; hence, tourists have to use cycle-rickshaws, Tongas and electric buses to reach the monument.