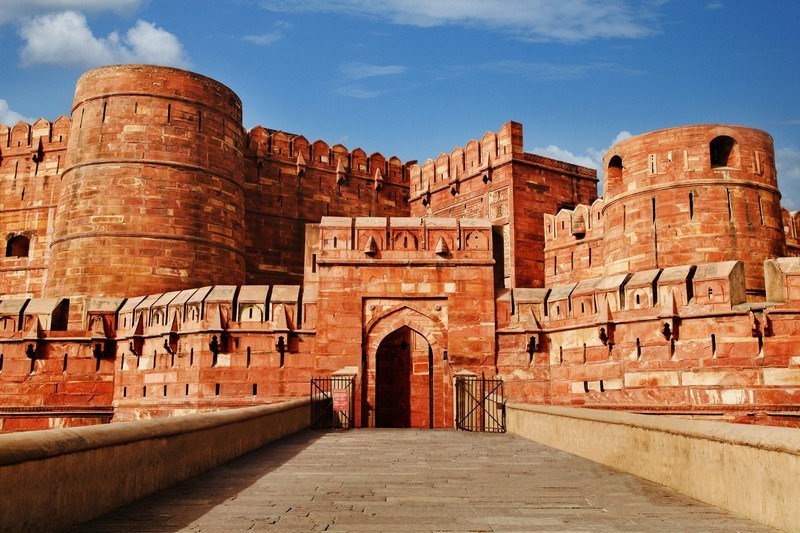 At a distance of 4.5 km from Agra Cantonment Railway Station and 2.5 Km from Taj Mahal, The Agra Fort, also known as the Lal Qila or Red Fort, is situated on the banks of Yamuna River in Agra, It is among the prime places to visit in Agra City. Uttar Pradesh. The Fort is a UNESCO World Heritage and one of the best forts in India.

Agra Fort was originally a brick fort known as Badalgarh, held by Raja Badal Singh, a Hindu Rajput king (1475 AD). Sikandar Lodi was the first Sultan of Delhi to shift his capital from Delhi to Agra. After Sikandar Lodi died in 1517, his son Ibrahim Lodi held the fort for 9 years until he was defeated and killed in the battle of Panipat in 1526. Several palaces, wells and a mosque were built in the fort during the Lodi period.

After the First Battle of Panipat in 1526, the victorious Babur stayed in the fort, in the palace of Ibrahim Lodi. He later built a baoli (step well) in the fort. The emperor Humayun was crowned in the fort in 1530. Humayun was defeated at Bilgram in 1540 by Sher Shah. After Humayun reestablished the Mughal Empire in 1555, Agra Fort was reconstructed by the third Mughal emperor Akbar on the remains of Badalgarh. He ordered to renovate the fort with red sandstone. Around 4000 workers were deployed and it was completed in 8 years (1565-1573). Aurangzeb imprisoned his father Shah Jahan in the fort for 8 years until he died in 1666 and was buried in the Taj Mahal. The fort was captured by the Marathas and finally the British in 1803 AD.

The fort, semi-circular on plan, is surrounded by a 21.4 m high fortification wall. Two walls made of red sandstone surround the fort. Double ramparts have massive circular bastions at regular intervals. There are four gates on its four sides; one of the gates was called khizri-gate which opens to the river front, where ghats were provided. The fort spreads over an area of about 94 acres of land.

The Delhi Gate and the Lahore Gate are the notable gates. The Lahore Gate is also popularly known as the Amar Singh Gate, the Delhi Gate is considered the grandest of the four gates and a masterpiece of Akbar's time. A wooden drawbridge was used to cross the moat and reach the gate from the mainland. The Amar Singh Gate to the south is the sole entry point to the fort these days.

Abdul Fazl, a court historian of Akbar, records that 5000 structures were built here beautifully in Bengali and Gujarati style. Most of these buildings have now disappeared. Shah Jahan himself demolished some of these in order to make room for his white marble palaces. Later, the British destroyed most of the buildings for raising barracks. Hardly 30 Mughal buildings have survived on the southeastern side. Of these, the Delhi-Gate, Akbari-Gate and Bengali-Mahal, are notable structures raised during the reign of Akbar. Within this Fort there are some of the most exquisite architecture of the Mughal Period; like the Moti Masjid, Diwan-i-Khas, Diwan-i-Am and Jahangiri Mahal.