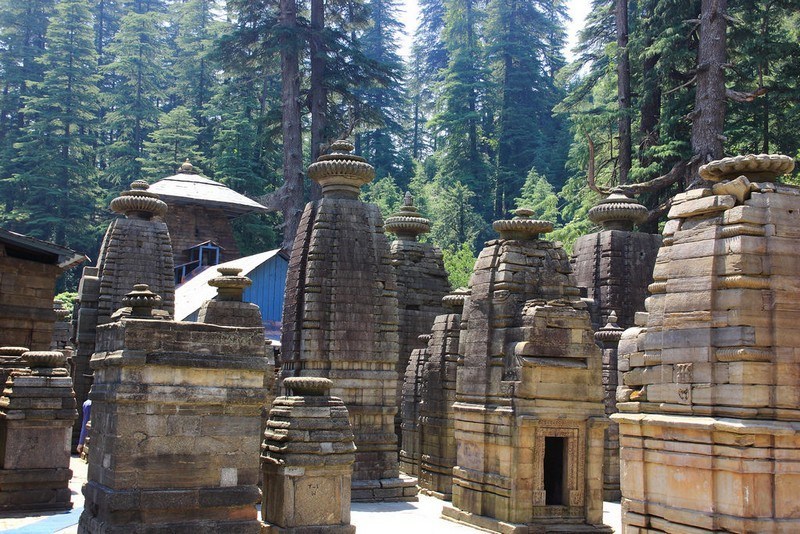 At a distance of 37 km from Almora, Jageshwar is a Hindu pilgrimage town in Almora district of Uttarakhand. It is located at an altitude of 1870 m on the banks of Jataganga River.

Jageshwar was once the center of Lakulish Shaivism (Lakulish is 28th Avatar of Shiva). Origin and history of Lakulish (Shiva with a wooden stick) traverse back to Gujarat region of current India. The temple city comprises a cluster of 124 large and small temples with many preserved by the Archaeological Survey of India, which include Dandeshwar Temple, Chandi Temple, Jageshwar Temple, Kuber Temple, Mritunjaya Temple, Nanda Devi or Nava Durga, Nava-grah temple, a Pyramidal shrine, and Surya Temple, amongst which the oldest shrine is the Mrityunjaya Temple and the biggest shrine is the Dandeshwar Temple.

There is no definite dating of the construction of Jageshwar group of temples but according to the ASI, they belong to the post-Gupta and pre-medieval eras. These temples range in the period from the 8th century (early Katyuri Dynasty) to the 18th century (Chand Dynasty). The temples were renovated during the reign of Katyuri King Shalivahandev. There is an inscription of Malla Kings in the main temple indicating their devotion to Jageshwar. The Katyuri Kings also donated villages to the temple priests for its maintenance. The Chand Kings of Kumaon were also patrons of the Jageshwar temple. Numerous Jageshwar temples were constructed or restored during the Gurjara Pratihara era.

Over 25 inscriptions of different periods are found on the walls and pillars of the Jageshwar temples. Most of these belong to 7th century AD to 10th century AD. The dialect of inscriptions is Sanskrit and Brahmi. It is believed that Adi Shankaracharya visited Jageshwar and renovated and re-established many temples before leaving for Kedarnath. The Samsan ghat of Jageshwar is also the cremation ground of the erstwhile Chand Kings.

The temple architecture belongs to the Nagara style, characterized by a tall curved spire surmounted by an amalaka (capstone) and a kalasha crown. Most of the temples enshrine a stone lingam, surrounded by stone sculptures of various deities. The pilgrimage to Jageshwar was considered as sacred as the famous Char dham yatra.

The main temple in the Jageshwar temple complex is dedicated to Bal Jageshwar or Child Shiva. It is believed that Lord Shiva had come to this site for meditation. So when the women folk of the village came to know that, they all gathered to catch a glimpse of Lord Shiva, making the men folk infuriated and to control the situation Shiva converted himself into a child and since then he is worshipped in his child avatar. The temple faces towards west and the shivaling in the sanctum sanctorum of the temple is divided into two parts with the larger part depicting Lord Shiva and the smaller one depicting his consort Parvati.

Another interesting temple to explore in this complex is Mrityunjaya Temple. The temple is believed to be the oldest of all the temples in the complex and houses a huge lingam in the unique eye-shaped opening. The temple faces the east direction and the lingam is worshipped as a savior from death.

Located at a distance of about 2 km from Jageshwar, Dandeshwar Temple is another popular shrine of Lord Shiva. Dandeshwar Temple is believed to be one of the biggest and tallest temples in the Kumaon region. The temple is different in architecture from all the other Nagar style temples in the region and houses a big uncut natural rock, which is worshipped as Shivaling.

Kot Ling is situated at the sangam of Jataganga and Sam Ganga Rivers. As per the local folklore, Kot Ling was originally selected as a place by Shiva for meditation. This place is around 2 km walk from the main temple complex of Jageshwar. A small mountainous trek leads to this place and this temple is in ruined state. Sri Vriddha Jageshwar temple is situated 3 km north to Jageshwar. This temple is situated at the top of the hill and comes after an uphill trek. It is contemporary to Jageshwar group of temples.

The Archaeological Museum is another popular must see place in Jageshwar. The museum is run by Archaeological Survey of India and houses around 174 sculptures dating from 9th to 13th century AD. The museum has two galleries and some of the prominent sculptures of the museum are Uma-Maheshwar, Surya and Navagraha.

The Jageshwar Monsoon Festival, held between 15 July to 15 August takes place at Jageshwar during the month of Shravan and the annual Maha Shivratri Mela, which takes place during spring, is an important festival of Kumaon region.