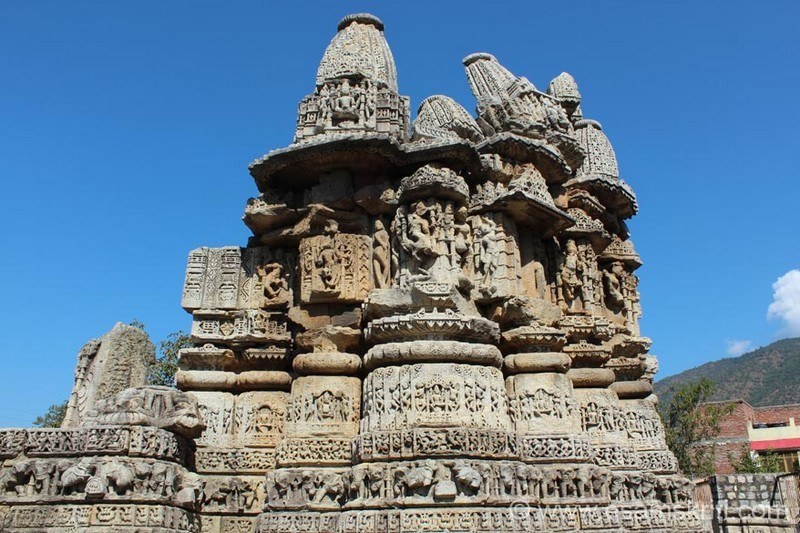 Travel Tips: Dunagiri Temple is 14 km from Dwarahat and can be visited along with this.

At a distance of 34 km from Ranikhet & 77 km from Almora, Dwarahat is an ancient town situated in Almora district of Uttarakhand. It is famous for its ancient temples which were constructed mainly by the Katyuri kings and are maintained by ASI.

Dwarahat, which means Way to Heaven, was once the principal seat of the Katyuri kings whose empire was stretched from the Sutlez River in the west to river Gandak in the east, and from the Himalayas to the plains, including the whole of Rohelkhand. Later it came under the rule of the Chand Rajas of Kumaon in the sixteenth century.

Dwarahat has 55 ancient temples of exquisite architectural excellence, divided into 8 groups. Some temples now have great archaeological value. These were constructed in the Indo-Aryan, Maru-Pratihara or Nagara type. The temples are constructed mainly of masonry blocks of Pre-Cambrian granite available in the nearby area. Instead of mortar, iron clamps and dowels have been used to tie adjoining blocks.

Badrinath Group of Temples has three temples, of which the main temple is dedicated to Lord Vishnu, worshiped as Badrinath. Constructed in Sikhara style facing east, it consists of garbhagriha, antrala and mandapa. The black stone image of Vishnu is placed in the sanctum. The temple bears an inscription of samvat 1105, suggesting the date of the construction of the temple as 1048 AD. There are two more miniature shrines in the group; one is dedicated to Godess Laxmi while other is devoid of any image.

Bandeo Temple is standing in the middle of cultivated fields on the banks of a small stream, known as Khiru Ganga. This pyramidal shrine, represents the earliest extent developed temple of central Himalaya.

Gujar Deo Temple can be described as a master piece of temple architecture of the region of Sekhari Sikhara type. It is an orthogonal temple with panchratha plan. This temple represents the most developed type of nagara temples of Central Himalayan region. On the basis of architecture and sculptural art, it is dated to 13th century AD. Now, the temple is in dilapidated condition.

Kacheri Group of Temples has 12 shrines, five each living in two rows while the remaining two stands separate on higher terrace. These temples are dated to 11th-13th century AD. These shrines have a common portico with series of free standing pillars with plain shafts and brackets in front. These temples were dedicated to Lord Siva and Lord Vishnu. There is also a circular well made of stone blocks in the complex.

Maniyan Group of Temples is a group of nine temples. Four shrines are built in a way that it constitutes a single component with a common courtyard in front. Images of the Jain thirthankara on lintel of three shrines suggest that these shrines are dedicated to Jain sect which generally is not found in this region. However, remaining shrines seems to be dedicated to Brahmincal deities. This group of temples is assigned to 11th - 13th century period.

Mritunjaya Group is one of the most sacred groups of temples at Dwarahat. Main temple is dedicated to Lord Shiva, known as Mritunjaya belongs to 11th-12th century AD. This nagara temple has garbhagriha, antarala followed by mandapa. There is another temple dedicated to Bhairav in the same complex while other shrines are devoid of any images and are in ruined condition.

The Ratan Deo Temple Complex comprises of nine shrines, however, presently only six temples are intact. Three temples stands on a common platform preceded by a north facing common mandapa each dedicated to god Brahma, Vishnu and Siva. Among the subsidiary shrines, one stands on the west and other two facing east dedicated to other Hindu deities. These temples are estimated to be from 11th-13th century period.