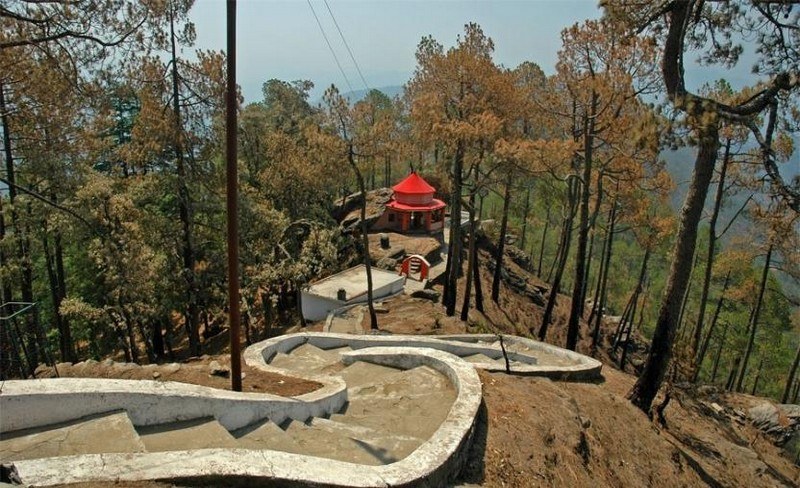 At a distance of 10 km from Almora Bus Stand, Kasar Devi Temple is a famous Hindu shrine at Kasar Devi village in Almora district of Uttarakhand. It is one of the oldest Hindu temples of the region.

Kasar Devi Temple is believed to be built in 2nd century AD and is dedicated to Kasar Devi. The temple is adorned on a hillock at an altitude of 2116 m overlooking the town of Almora. In 1890's Swami Vivekananda came to this temple for meditation. Alfred Sorensen who is also known as the Sunyata Baba stayed here for many years in 1930s. Several saints reported the presence of a divine power in these areas. It is said that this place is exposed to Van Allan belt, that's why a special natural powers are felt among people who come here.

Many foreigners came here in search of spiritualism with the effect of Sunyata Baba. The constant presence of foreigners conforming to the Hippie culture of the late 70s and early 80s led to the naming of this place as Hippie Land.

Kasar Devi Temple was a small stone structure built in the Nagara Style and got destroyed in the landslide occurred in the early 18th century. The present temple is the combination of Hindu and Buddhist structure. The main temple has a huge tower with a conical dome on its top. This is a circular structure having a porch with pillared verandah on the outer side.

The Kasar Devi Temple offers a pleasant view of the Almora city and Hawabagh Valley. One can also savour a 360 degree view of the majestic Himalayan peaks. The place is popular among most hikers as it offers beautiful views of the surroundings. The spot is situated amidst thick covers of Pine and deodar jungles and that is a home to various species of birds. Visitors to Kasar Devi temple also visit the Kalimath temple which is nearby.

A large fair, known as Kasar Devi Fair, is held here on the occasion of Kartik Poornima which falls in the month of November / December.