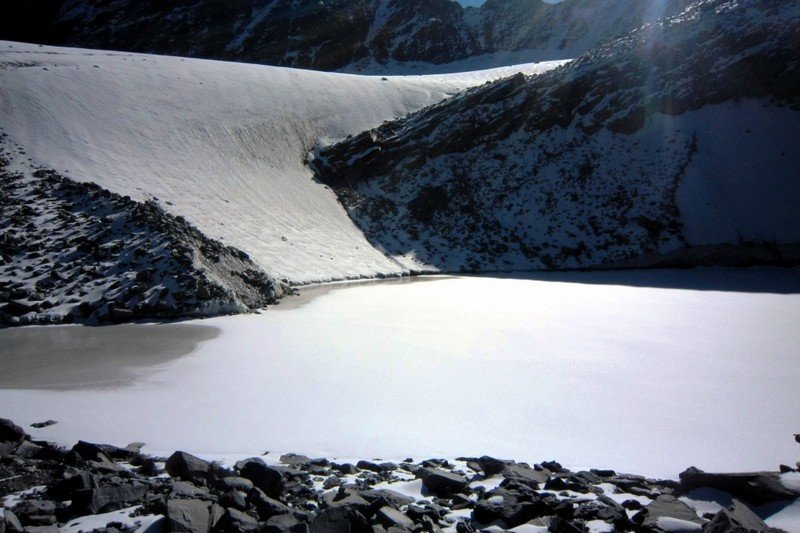 #4 of 8 Places to Visit in Yamunotri

At a distance of 10 km from Yamunotri Temple, Saptarishi Kund is the original source of Yamuna River fed by Champasar Glacier situated in the upper parts of the massif created by Bandarpunch Mountain. It is an ideal place for trekking near Yamunotri for 2-3 days.

Saptrishi Kund is about a half km in diameter, and its water is dark blue in color, The water of the nearby glaciers gathers in this lake. On the banks of Saptrishi Kund Lake, there are naturally created slate stones. The rare Brahma Lotus grows here. It is believed that seven great Rishis Kasyapa, Atri, Bharadwaj, Viswamitra, Gautama, Jamadagni, and Vasistha performed penance at Saptrishi Lake in ancient times.

The Saptrishi Kund is located amidst magnificent and enchanting surroundings of the lofty rock strewn glaciers. This scenic spot lies at an altitude of 4421 m. Trek to Saptrishi Kund is considered to be one of the most difficult treks in the Himalayas. The route of Saptrishi Lake is covered with ice and it is a difficult journey which needs a guide.

The 10 km trek to Saptrishi Kund starts from the Yamunotri temple. The whole trek passes through dense forests and rugged mountainous terrain. Around 5 km up the hill there is a little camp site between two rivulets if one wishes to pitch tent for a night. From the camp site, it is another 5 km of steep walk to the Kund and it is risky to camp at Saptrishi Kund due to heavy winds. Saptrishi Kund is also a natural source to find high quality Blue sapphires, a precious gemstone.