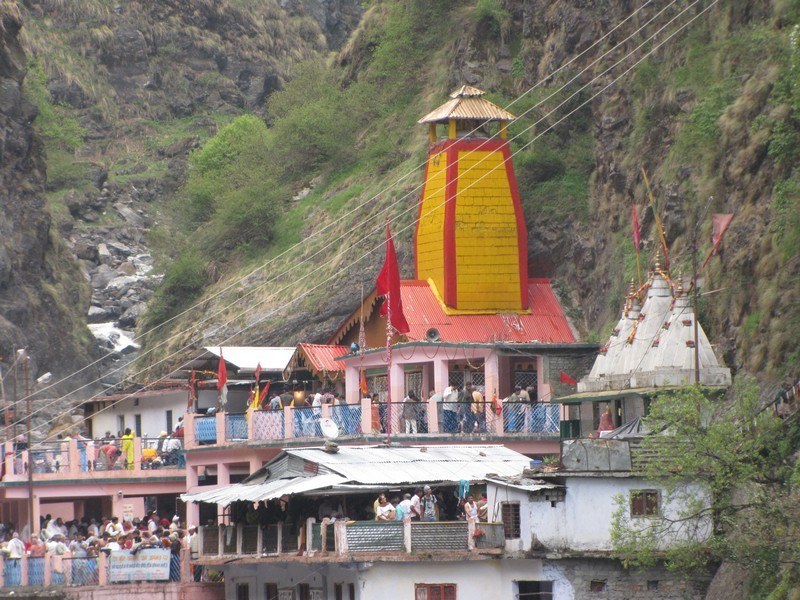 #1 of 8 Places to Visit in Yamunotri

At a distance of 5 km from Janki Chatti, 13 km from Hanuman Chatti, 46 km from Uttarkashi and 50 km from Barkot, Yamunotri Temple is situated in the western region of Garhwal Himalayas at an altitude of 3293 m in Uttarkashi district of Uttarakhand.

The temple, perched atop Bandarpunch parvat, is the first place to visit in Chota Char Dham circuit. The temple is dedicated to Goddess Yamuna and has a black marble idol of the goddess. The temple of Yamuna, on the left bank of the Yamuna, was first built by Maharani Gularia of Jaipur in the early 19th century. The temple was damaged in the earth quakes of 1923 and 1982. But it was subsequently rebuilt by Maharaja Pratap Shah of Tehri Garhwal, who was the ruler of this region.

According to the ancient legend, Yamunotri is also believed to be the residence of sage Asit, who bathed daily both in the Ganges and the Yamuna. Unable to go to Gangotri during his old age, a stream of the Ganges appeared opposite Yamunotri for him. According to mythology, Goddess Yamuna is the daughter of Lord Surya (Sun God) and Devi Sandhya and is the sister of Lord Yama. Pilgrims believe that performing holy ablutions in Yamuna offers a painless death in the old age.

Geologically, River Yamuna originates from the Champasar Glacier, which is located below Bandarpunch Mountain at an altitude of 4421 m. Two hot springs are also present at Yamunotri; Surya Kund has boiling water properties while the Gauri Kund has lukewarm water suitable for bathing. The spring water is said to be hot enough to cook rice and potatoes. Near the Surya Kund there is a shila called Divya Shila, which is worshipped before puja is offered to Goddess Yamuna.

The Yamunotri temple is only accessible by 5 km walk from Janki Chatti or 13 km trek from the town of Hanuman Chatti. Horses or palanquins are available for rent. There are two trekking routes from Hanuman Chatti to Yamunotri, the one along the right bank proceeds via the Markandeya Tirth, where the sage Markandeya wrote the Markandeya Purana, the other route which lies on the left bank of the river goes via Kharsali.

Thousands of devotees visit this sacred place during the months of May - October. The temple opens on Akshaya Tritiya (May) and closes on Yama Dwitiya (the second day after Diwali, Oct / Nov) for the winter. Kharsali is the winter home to the idol of goddess Yamuna.