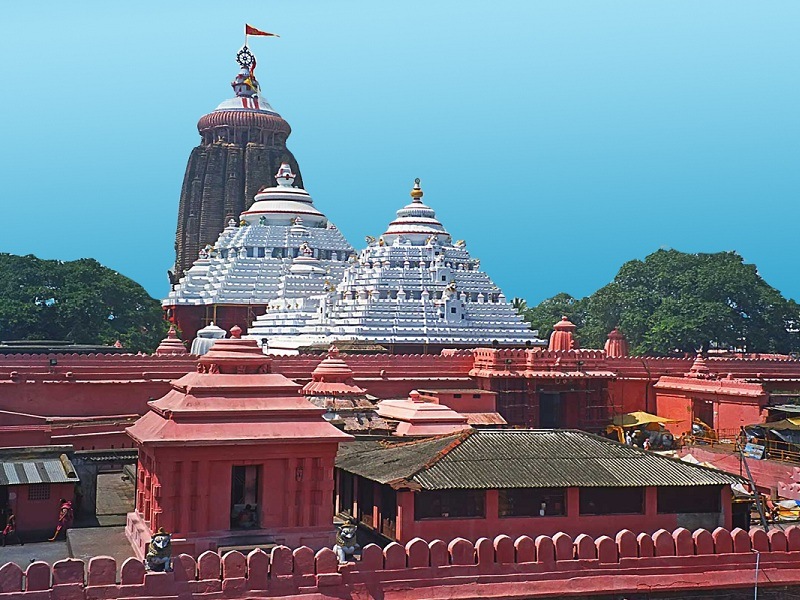 Travel Tips: Jagannath Temple will be closed for Darshan for 15 days in the month of June/July every year after 'Snana Yatra'. This temple is also closed for Non-Hindus who contend themselves by just viewing it from outside its precincts.

At a distance of 2.5 km from Puri Junction, Jagannath Temple is a sacred temple situated in the heart of Puri town in Orissa. It is the most revered pilgrimage site for Hindus as it is included in the pious Char Dham Yatra with Badrinath, Dwarka and Rameshwaram. This world famous temple is one of prime places to visit in Puri.

The temple is dedicated to Lord Jagannath, a form of Lord Vishnu and is one of the major Hindu Temples in India. The present temple was built by Anantavarman Chodaganga (1077 - 1150 CE) of Eastern Ganga dynasty, replacing an earlier structure which probably dated to the 10th century CE. Later, King Ananga Bhima Deva II (1170-1198) did much to continue the work of Chodaganga Deva, building the walls around the temple and many of the other shrines on the temple grounds.

The temple structure is full of excellent carvings and is a fine specimen of Kalinga style of architecture. Spread over an area of 4, 00,000 square feet with 20 feet high fortified wall, the world famous temple is stand on a 10 acres elevated stone platform. The shikara of the Jagannath temple towers to a height of 192 feet. There is a wheel called Nila Chakra on top of the Jagannath Temple made of an alloy of eight metals. Structurally the temple has four chambers and they are Bhogmandir, Nata-mandir, the Jagamohana and the last is the sanctum or the Deul enshrining the deities.

The main deities worshipped in the temple are Lord Jagannath, Lord Balabhadra and Devi Subhadra. Unlike the statues found in other Hindu temples, the statues of main deities are carved from wood and are replaced every 12 years. The two Gods and the Goddess of the temple are ornamented according to the occasion and seasonal change.

Jagannath Temple has four entrance gates, named as Singhadwara, Ashwadwara, Hathidwara and Vyaghradwara and these names refer to lion, horse, elephant and tiger. This temple is also known for having world's largest kitchen where thousands of devotees are feed every day. Lakshmi Temple is one of the important temples situated in the Jagannath Temple Complex. The temple is dedicated to Goddess Lakshmi and plays an important role in the Rath Yatra. On the sixth day of the fortnight of Jyeshta, Lord Shiva and Goddess Parvati were invited to this shrine by Goddess Lakshmi. Vimala Temple is another famous temple inside the temple complex and is considered as the Shakti Peetha.

There are as many as 24 festivals celebrated each year at Jagannath Temple. The most important of them being the Rath Yatra or the Chariot festival held in the month of June / July. In a grand procession the deities are taken on lavishly decorated chariots to Gundicha Temple, known as the temple of Lord's Aunt. Large numbers of pilgrims gather from all over the country to witness this festival.