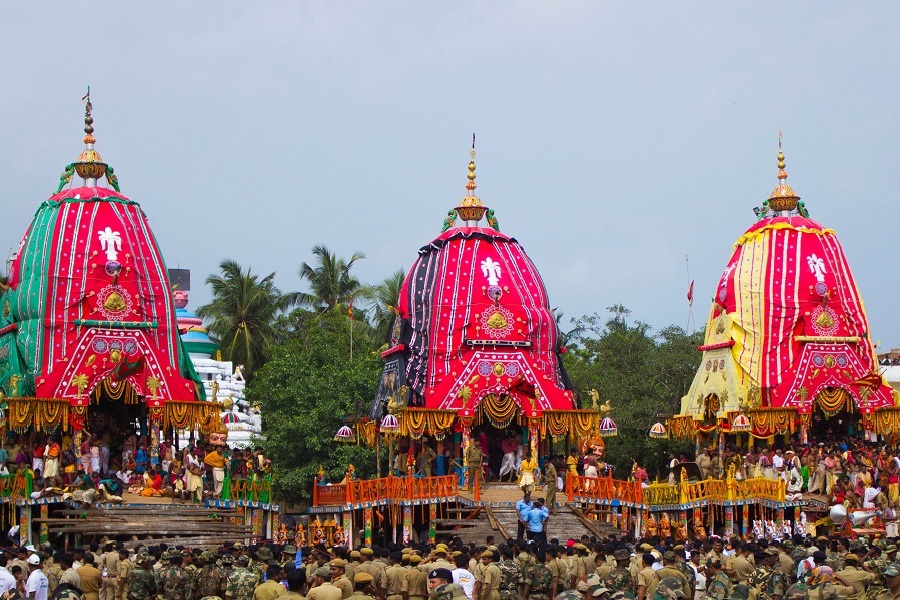 At a distance of 36 km from Konark, 58 km from Bhubaneswar, 82 km from Cuttack, 390 km from Rourkela, 407 km from Jamshedpur, 434 km from Vizag, 495 km from Kolkata, and 522 km from Ranchi, Puri is an ancient temple town situated along the coast of Bay of Bengal in Odisha. Puri is one of the places of original holy Char Dham Yatra of Hinduism and also one of the top places to experience Odisha Tourism.

Earlier called as ShriKhetra, Purushottama Khetra, and Jagannath Puri, Puri is home to the world famous Sri Jagannath Temple. Often referred as the spiritual capital of Odisha, Puri forms the Golden Triangle of Orissa along with Konark and Bhubaneswar. Puri became an important center of pilgrimage with the arrival of Gangas in the 12th century and emerged as one of the centers of Vaishnavism. Anantavarman Chodaganga, one of the powerful rulers of Puri, established the Purushottama Temple and later came to be known as the Jagannath Temple in the 15th century.

According to history, Puri and the Jagannath Temple were invaded 18 times by Hindu and Muslim rulers from 4th century AD till the early 19th century. Puri was declared as the capital of Odisha under the British till 1816 CE. In 1828 CE the whole territory was separated into three regions, Katak, Balasore, and Jagannath Puri. In 1936 CE Odisha was divided from the state of Bihar and Puri was formed in 1948 CE.

Dedicated Lord Vishnu, Lord Jagannath Temple is one of the prime places to visit in Puri and is a sacred place for the Hindus. Besides Jaganath Mandir, Puri has so many tourist attractions like Puri Beach, Gundicha Temple, Lokanath Temple, Alarnath Temple, Bedi Hanuman Temple, Pipili, Raghurajpur and Chilika Lake & Sanctuary.

Puri is famous for its annual festival of Chariots, the 'Ratha Yatra', which is held during the month of June /July and has been attracting pilgrims and tourists for centuries. It is the sacred journey of Lord Jagannath with brother Balabhadra & sister Subhadra from the main Jagannath Temple to Gundicha Mandir for nine days.

The best time to visit Puri is from November to February. Being a coastal town, Puri has extreme weather conditions in summer while in monsoons the city witnesses medium to heavy rainfall. Winter climate is pleasant and is suitable for sightseeing.

How to Reach Puri - Full Details

Top 10 Places to Visit in Puri

At a distance of 2.5 km from Puri Junction, Jagannath Temple is a sacred temple situated in the heart of Puri town in Orissa. It is the most revered pilgrimage site for Hindus as it is included in the pious Char Dham Yatra with Badrinath, Dwarka and Rameshwaram. This world famous temple is one of prime places to visit in Puri.

The temple is dedicated to Lord Jagannath, a form of Lord Vishnu and is one of the major Hindu Temples in India. The present temple was built by Anantavarman Chodaganga (1077 - 1150 CE) of Eastern Ganga dynasty, replacing an earlier structure which probably dated to the 10th century CE. Later, King Ananga Bhima Deva II (1170-1198) did much to continue the work of Chodaganga Deva, building the walls around the temple and many of the other shrines on the temple grounds.

The temple structure is full of excellent carvings and is a fine specimen of Kalinga style of architecture. Spread over an area of 4, 00,000 square feet with 20 feet high fortified wall, .....

At a distance of 2 km from Jagannath Temple and 2.5 km from Puri Junction, Puri Beach is a pristine sea beach located along the coast of Bay of Bengal in Puri, Odisha. It is considered as one of the cleanest beaches in India and also one of the best Puri Tourist Places.

Known for its fine white sands and crystal clear waters, Puri Beach is quite famous for its peaceful and calm surroundings. The beach has continued to be a sacred venue and is visited by an endless number of pilgrims for a purification dip who come to Puri to pay their homage to Lord Jagannath. The long white sandy beach draws large numbers of foreigners and Indians. Visitors can take a stroll, browse pearls and seashell souvenirs sold by local vendors.

The beach is also famous for the sand sculptures made by internationally known sand artist Sudarshan Patnaik. The subjects are generally inspired by sculptures covering the temple walls, characters and episodes from the mythology and also the contemporary events. .....

Gundicha Temple has some interesting legends related to it. According to one legend, Gundicha, the queen of the King Indradyumna, was a great devotee of Lord Jagannatha. Because of her deep devotion, Lord Jagannath promises her to come to her house .....

At a distance of 1 km from Jagannath Temple and 2.5 km from Puri Junction, Narendra Tank or Narendra Pokhari is a holy tank situated at Mauza Dandimala Sahi in Puri. This is one of the largest tanks in Orissa and also one of the must visit places in Puri.

The tank was built in 15th century AD by Narendra Dev, who shouldered the responsibility of the kingdom with Purushottama. The tank is spread over a vast area, which features an island in the middle, housing a small temple called Chandana Mandapa which is connected to the southern bank with a bridge. This tank is considered holy and has a lot of small and big temples surrounding it. The water level of the tank is 10 feet below the present road level. The tank covers 16 ghats which provide an opportunity for the pilgrims to have a holy bath. The main ghat has a flight of steps made up of Khondalite.

Also known as Chandana Pushkarini, this is the holy tank in which the famed Chandana Yatra of Lord Jagannath celebrated annually. .....

At a distance of 8 km for Puri, Balghai Beach is a pristine beach along the cost of Bay of Bengal on Puri - Konark Marine Drive Road in Odisha. Situated at the mouth of Nuanai River, Balghai Beach is one of the most notable beaches in Odisha and is relatively undiscovered.

This white sandy beach is ringed by casuarina trees, Alaska and Eucalyptus trees. The beach is completely standalone out of the crowd that attracts lots of tourists who are craving for some relaxing quite time. The magnificent view of Sunrise and Sunset from the beach amidst dazzling golden hues is an unforgettable experience for everyone who comes here from far off places.

Olive Ridley Turtles visit the beach during December and January to lay eggs and many migratory birds can be seen during winter months. Here boat riding, water skiing and parasailing facilities are available for tourists. Visitors can also visit the Balihirana Deer Sanctuary where one can spot the endangered Balihirana antelope and Indian .....

At a distance of 2 km from Puri Junction, Sudarshan Craft Museum is located at station road in Puri. It is one of the best places to visit in Puri for art lovers.

The Sudarshan Craft Museum was started in the year 1977 by Shri Sudarhsan Sahoo. The museum exhibits great collection of artistic works done by Sudarshan Sahoo like carvings in wood, stone and fiber glass, handicraft items and also fine paintings. Within the premises of museum, one can witness a Buddhist temple built in a Japanese style, a library and a workshop.

This museum is a must visit place for art lovers as it gives a very enriching and knowledgeable experience to visitors. The items kept on display are rare works of art and are the gems of tradition and culture of the nation. The museum has metal figurines, stone carvings too for sale. The museum provides a platform for budding artists to showcase their talent to the world.

At a distance of 22 km from Puri, Alarnatha Temple is an ancient temple located in Brahmagiri near Puri. Dedicated to Lord Vishnu, this is one of the famous temples of Lord Vishnu in Odisha and also one of the must visit places in Puri.

The present temple of Lord Alarnatha is said to be two hundred years older than the Jagannatha Temple in Puri. The temple is not a big tourist destination but a famous religious place for all Krishna devotees. Legend says that Lord Brahma came and worshipped Lord Vishnu here on top of a hill. According to history, the rulers of Alwar in Rajasthan had established the temple here. The temple was later known as Alwarnath or Alarnath.

The temple is associated with the visit of Chaitanya Mahaprabhu to Orissa. Chaitanya Mahaprabhu during his stay in Puri used to see Lord Jagannath daily. During Anavasara period when Lord and his siblings were taken to the secret chamber for 15 days, he was unable to see his dear Lord. So as per the legend lord directed .....

At a distance of 2 km from Sri Jagannath Temple and 4.5 km from Puri Junction, Lokanath Temple is an ancient temple located in the town of Puri. Dedicated to Lord Shiva, it is one of the most important Shiva shrines of Odisha and also one of the popular places to visit in Puri.

The presiding deity of this 11th century temple is Lord Lokanath in the form of lingam. According to history, the lingam in this temple was established by Lord Rama. While Lord Rama on his way to Sri Lanka for searching Sita reached Puri and sat with a vow to see Shiva here. At that time, there was a village named Sabarapalli nearby presented him a Lau or Lauka (Pumpkin) looking like a Shiva linga. Lord Rama installed that as a replica of Siva linga at that place and prayed Shiva to fulfill his desire. Thus the temple is called Laukanatha and later named as Lokanath Temple.

The unique feature of the temple is the Shiva linga is always submerged with water which substantiates the legend that Goddess Ganga .....

The temple is dedicated to Lord Shiva and is believed to be from Ganga dynasty dating back to 12th century. According to the mythology, sage Markandeya was saved by Lord Shiva from a great danger. Sage Markandeya erected a Shiva temple out of dedication. Also known as Markandeya Shiva Temple and Markandeshwara Mahadeva Temple, the temple is connected with the rituals of Chandan Yatra, Balabhadra Janma, Ashram Bije, Sital Sasthi, Kaliyadalan etc. of the Jagannath Temple.

Markandeya tank is an open structure and it enclosed within a stone wall made of laterite blocks. The tank is presently used for rituals .....

At a distance of 1.5 km from Puri Junction and 3 km from Jagannath Temple, Bedi Hanuman Temple is a small sea side temple situated to the west of Chakra Narayan Temple in Puri. Known as Daria Mahavir Temple, it is one of the famous temples in Puri.

The temple is dedicated Lord Hanuman. On local language, 'Daria' Means Sea and Mahavir is another name of Lord Hanuman. The temple has an interesting story behind the name 'Bedi Hanuman'. It is believed that Daria Mahavir protects Puri against the fury of the sea. But when the Jagannath Temple was built, Varuna, the God of the Sea, able to came to the Jagannath temple to pay his respects.

In the meantime sea water entered the city, causing considerable damage to the temple. The devotees prayed to Lord Jagannath who asked Hanuman to explain how the sea entered the city in his presence. Lord Hanuman told that he was not present at that time and was left for Ayodhya without informing him. On hearing about Lord Hanuman's unscheduled .....

Best Places to Visit in Orissa