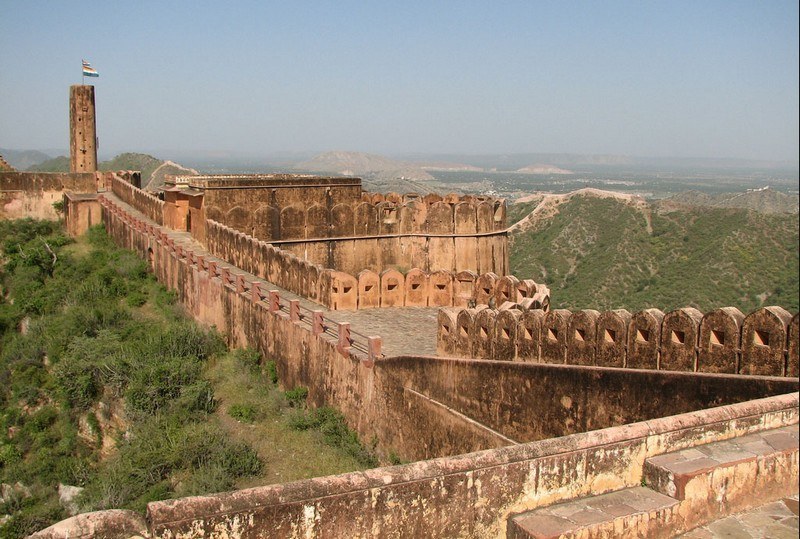 Travel Tips: This is usually visited from Amer Fort (1 km by walk)

At a distance of 15 km from Jaipur Junction Railway Station and less than 1 km (by walk) from Amer Fort, Jaigarh Fort is situated on a cliff called Cheel ka Teela (Hill of Eagles) of the Aravali range. It overlooks the Amber Fort and the Maota Lake. This is one of the best forts in Jaipur and also among the famous Jaipur tourist places which is commonly visited from Amber Fort.

The fort was built by Jai Singh II in 1726 to protect the Amber Fort and was named after him. Amer was once known as Dhundhar, the old and original fort of Amer was ruled by clan of Meenas and later it was ruled by Kacchwa Rajputs. The Jaigarh fort was actually a defensive structure rather than a palace. Jaigarh Fort and Amber Fort are connected by underground passages.

The Jaigarh Fort is similar in structural design to the Amer Fort. It has a length of 3 km and width of 1 km. The fort was built with red sandstone. The fort is situated 400 m above Amer palace and it provides an excellent view of Aravalli hills and the Amber Fort down below. There are two main entrances to the fort called as Dungar Darwaza which is located towards the south and Awani Darwaza that lies to the east.

The fort is well preserved with palaces, granary, canon foundry, many temples, a tower and the main attraction of the Jaigarh Fort, the Jaivana canon. The cannon was manufactured in the fort foundry in 1720 and is the world's largest cannon on wheels. The barrel is 20.19 foot (6.15 m) in length and weighs 50 tons. It has a diameter of 11 inches.

The fort was a major center for cannon production during Mughal era and many of the manufactured weapons are now on display in the museum inside the premises of the Jaigarh Fort. The museum has a wide display of swords, shields, guns muskets and a 50 kilograms cannonball and handmade grenades and rockets. The museum is located to the left of the Awani gate it has exhibits of Photographs of Royal families, stamps and many artifacts.

There is a well maintained garden within the fort. The watch tower is the highest point in the fort that provides a panoramic view of the Jaipur city. There are two temples in fort one is Ram Harihar Temple of 10th century and the other one is Kal Bhairav Temple of 12th century. Water was supplied to fort from Sagar Lake. Water from Sagar Lake used to be transported to the fort in pouches loaded on elephant backs and also by humans carrying water pots. The water was stored in three underground tanks below the central courtyard. The largest tank had capacity to store 6 million gallons of water.