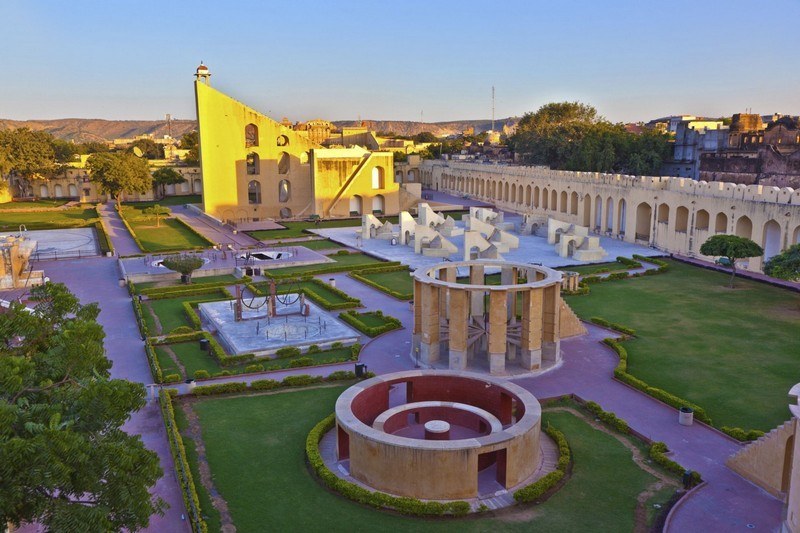 At a distance of 5.5 km from Jaipur Junction Railway Station, Jantar Mantar is located near City Palace and Hawa Mahal in Jaipur. It is one of the top tourist places in Jaipur City. This monument is the largest of the five astronomical observatories present in India. The other four astronomical observatories are located at Delhi, Varanasi, Mathura and Ujjain. It features the world's largest stone sundial, and is a UNESCO World Heritage site.

The Jantar Mantar was built by the Rajput king Sawai Jai Singh II and completed in 1738 AD. The name is derived from jantar means yantra and mantar means calculation. The Jaipur observatory was functional for seven years only, as the Maharaja was not very successful in deriving accurate, astronomical observations. It was later restored in the year 1901 and was declared as a national monument in the year 1948.

The monument features masonry, stone and brass instruments that were built using astronomy and instrument design principles of ancient Hindu Sanskrit texts. The instruments allow the observation of astronomical positions with the naked eye. It features the world's largest stone sundial Samrat Yantra. Jantar Mantar also includes about 15 astronomical instruments of various geometrical shapes and sizes. These instruments are used for measuring time, accurately determining the celestial altitude and predicting the occurrence of eclipses.

The Samrat Yantra, Jaiprakash Yantra and Hindu Chhatri are the popular structures within the Jantar Mantar. The big sundial or the Samrat Yantra is one of the major attractions of the observatory. This can show the time with an accuracy of only two-second difference from the local time of Jaipur. Samrat Yantra is 27.4 m in height and used to forecast the commencement of monsoon on Guru Purnima, even today. Rashivalayas Yantra, Dakshina Yantra, Disha Yantra, Unnathamsa Yantra, Raj Yantra, Narivalya Yantra and the Dhruv Yantra are the other structures in Jantar Mantar.