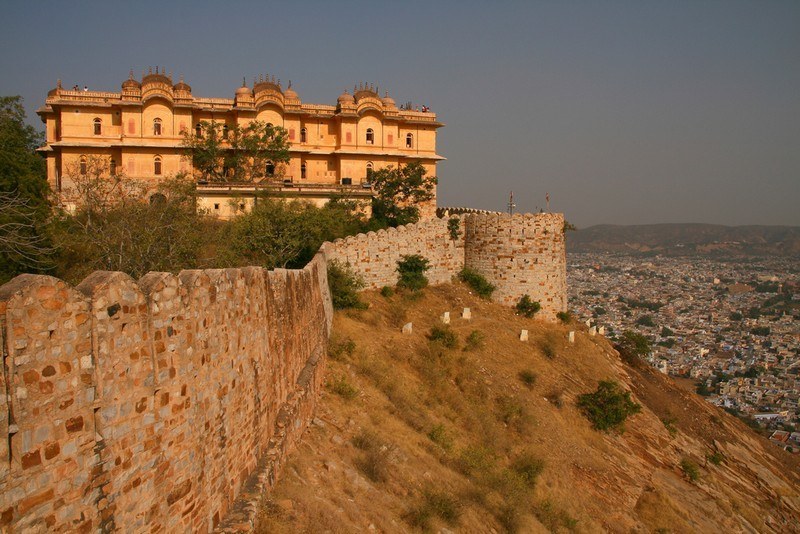 At a distance of 6 km from Jaipur Junction Railway Station and 9 km from Amer Fort, Nahargarh Fort stands on the edge of the Aravalli Hills, overlooking the pink city of Jaipur. It is one of the best forts in Rajasthan and among the best places to visit in Jaipur city.

Nahargarh Fort was built in 1734 by Sawai Jan Singh II, as a retreat place. The fortification walls extended over the surrounding hills connected Nahargarh Fort to Jaigarh Fort. Along with Jaigarh Fort and Amer Fort, it once formed a strong defence for Jaipur. The fort was originally named Sudarshangarh, but it became known as Nahargarh, which means abode of tigers. It is believed that the development of this fort was obstructed by the spirit of a Rathore ruler, Nahar Singh Bhomia. However, the spirit was pacified when a temple dedicated to him was built inside the fort. Later it was redesigned in 1868 by Sawai Ram Singh. This fort has huge walls and bastions that were later renovated in 1880 by Maharaja Sawai Madho Singh, with murals and beautiful designs.

The fort represents Indo-European architecture and there are many well preserved structures inside the fort. To the left of the entrance gate Tadigate, there is a temple dedicated to the deity of Jaipur rulers. Apart from this, there is another temple inside the fort, dedicated to the Rathore prince Nahar Singh Bhomia. The Madhavendra Bhawan, built by Sawai Madho Singh has a unique cluster of 12 identical suites for queens and at the head is a suite for the king himself. The rooms are linked by corridors and retain some delicate frescoes. It was used by members of the royal family for excursion in summer. Other structures inside the palace include Diwan-i-Am, an open air enclosure where the king met the general public and listened to their complaints.

Nahargarh Fort was never attacked but, it witnessed some major historical events, like the treaties with the Maratha forces which attacked Jaipur in the 18th century. This fort gave shelter to many Europeans in this region, including the British Resident's wife, during the Sepoy Mutiny of 1857. Nahargarh Fort looks stunningly beautiful at night when it's lit up. It provides wonderful view of the Man Sagar Lake, Jal Mahal and Jaipur City.