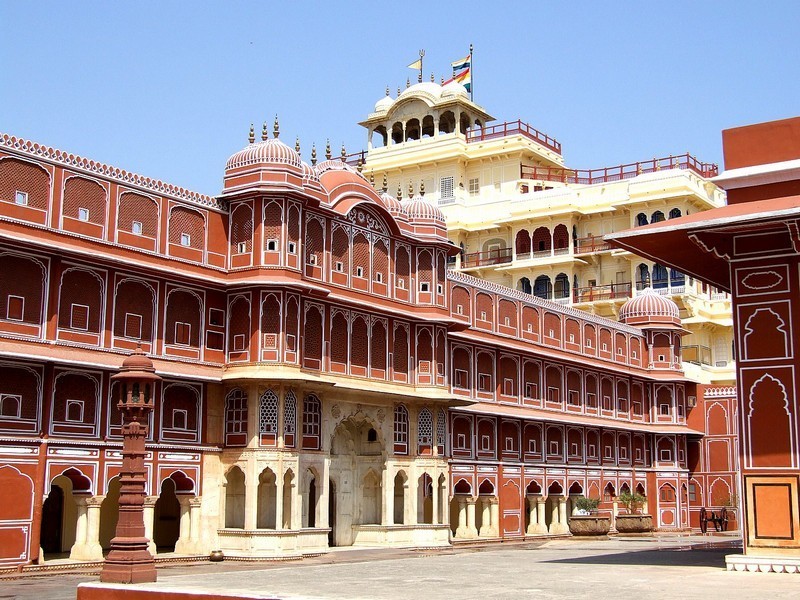 At a distance of 5.5 km from Jaipur Junction Railway Station, City Palace is a beautiful palace complex situated in the heart of Jaipur City. It is one of the popular palaces in Rajasthan, and among the famous places to visit as part of Jaipur tour.

The palace was built between 1729 and 1732 AD by Sawai Jai Singh II. He planned and built the outer walls and later additions were made by successive rulers till the end of the 20th century. City Palace was the seat of the Maharaja of Jaipur, the head of the Kachhwa Rajput clan. Part of the palace currently houses a museum, though the major part is still a royal residence. It one of the most famous Jaipur tourist places.

The City Palace reflects Rajput, Mughal, and European architectural styles although it was designed according to Vaastushastra. The Palace is laid in a grid pattern with wide avenues and is surrounded by large walls on all sides. It is a unique and remarkable complex of several palaces, pavilions, gardens, and temples. The most prominent structures in the complex are the Chandra Mahal, Mubarak Mahal, Maharani's Palace, Sri Govind Dev Temple, and the City Palace Museum. Virendra Pol, Udai Pol near Jaleb Chowk, and the Tripoli Gate are the entry gates to the City Palace.

Chandra Mahal is the most commanding building in the City Palace complex. It is a seven-storeyed building and each floor has been given a specific name such as the Sukh Niwas, Ranga Mahal, Pritam Niwas, Chhavi Niwas, Shri Niwas, and Mukut Mahal. It contains many unique paintings, mirror work on walls, and floral decorations. Sukh Niwas is painted in Wedgewood blue fully decorated with white lining. It has the drawing and dining room of the Maharaja which is fully ornamented with Mughal miniatures, silver and glass dining tables. Shobha Niwas is on the 4th floor of the Chandra Mahal. The Shobha Niwas is fully decorated with mirror walls with blue tiles ornamented with mica and gold leaf. Chhavi Niwas is on the 5th floor which has an elegant floor of blue.

At present, most of this palace is the residence of the descendants of the former rulers of Jaipur. Only the ground floor is allowed for visitors where the Maharaja Sawai Man Singh II Museum is located that displays carpets, manuscripts, and other items that belonged to the royal family. There is a beautiful peacock gate at the entry to the Mahal.

Mubarak Mahal was built with a fusion of the Islamic, Rajput, and European architectural styles in the late 19th century by Maharaja Madho Singh II as a reception center. The Diwan-i-Aam is an enchanting chamber, with the ceiling painted in rich red and gold color. This chamber, now functioning as an art gallery, has a variety of exhibits like textiles such as royal formal costumes, sanganeri block prints, embroidered shawls, Kashmiri pashminas, and silk saris as part of the Maharaja Sawai Man Singh II Museum.

Diwan-i-Khas was a private audience hall of the Maharajas, a marble-floored chamber. It is located between the armory and the art gallery. There are two huge sterling silver vessels of 1.6 m in height and each with a capacity of 4000 liters and weighing 340 kilograms on display here. They were made from 14000 melted silver coins. They are officially recorded by the Guinness Book of World Records as the world's largest sterling silver vessels.

Maharani's Palace was originally the residence of the royal queens. It has been converted into a museum, where weapons used by the royalty during war campaigns are displayed, including those belonging to the 15th century. The ceiling of this chamber has unique frescoes, which are preserved using jewel dust of semiprecious stones. It also exhibits pistols, ivory handles, cannons, chain mail, and swords.

Govind Dev Ji Temple, dedicated to Lord Krishna is part of the City Palace Complex. It was built in the early 18th century. It has European chandeliers and paintings of Indian art. The ceiling in the temple is ornamented in gold. Its location provided a direct view to the Maharaja from his Chandra Mahal palace.