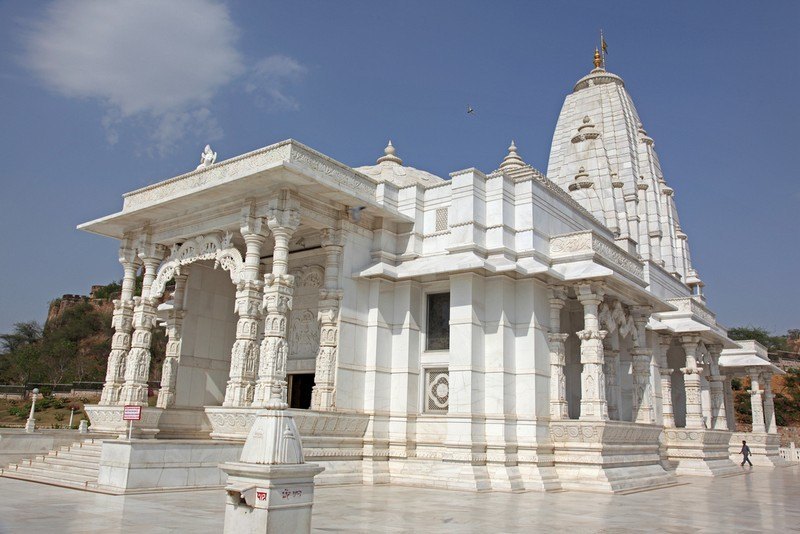 At a distance of 6 km from Jaipur Junction Railway Station, Birla Mandir is a Hindu temple located at the base of Moti Dongri Hill in Jaipur. The temple is sometimes also referred to as the Laxmi Narayan Temple. It is one of the major places to visit in Jaipur.

The Temple is dedicated to Lord Vishnu (Narayan) and his consort Lakshmi. The images of Lakshmi and Narayan attract the attention, being made out from one piece of marble. Standing on a raised platform, Birla Temple is made out with the premium quality of white marble. The temple looks stunning, when it is brightly lit in the night. The three huge domes of the temple represent three different approaches to the religion. The temple has lavish green gardens all around.

Stained glass windows depict the scenes from Hindu scriptures. The temple also houses numerous deities, with an exquisite image of Lord Ganesh. Delicate carvings of Hindu symbols, and ancient quotes from the Geeta ornament the walls of this fascinating temple. One can also recognize the mythological events engraved on the walls. Apart from the religious idols, pictures and figures of several religious saints, philosophers and historical achievers, like Socrates, Buddha, Zarathustra and Confucius, are also included in the temple.

The Birla Temple attracts large number of visitors during the festival of Janmashtami, which is celebrated to mark the birth of Lord Krishna. The complete temple premises are decorated beautifully with flowers during the festivals. The temple complex consists of a museum, where ancestral valuables of the Birla's are displayed.